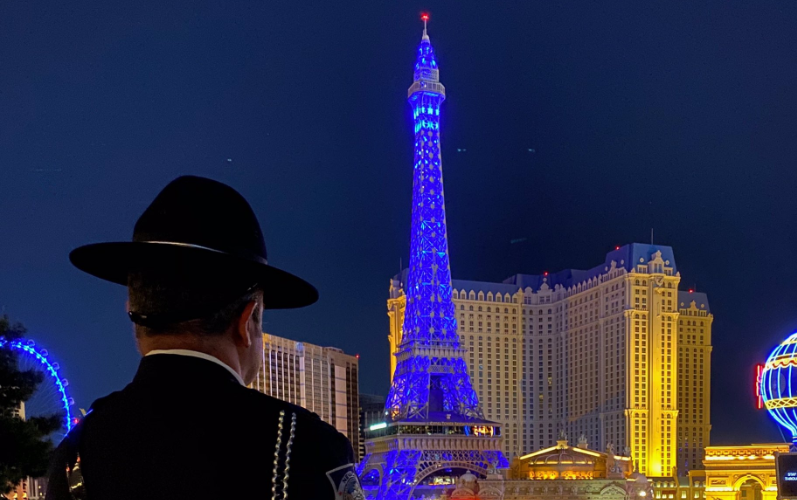 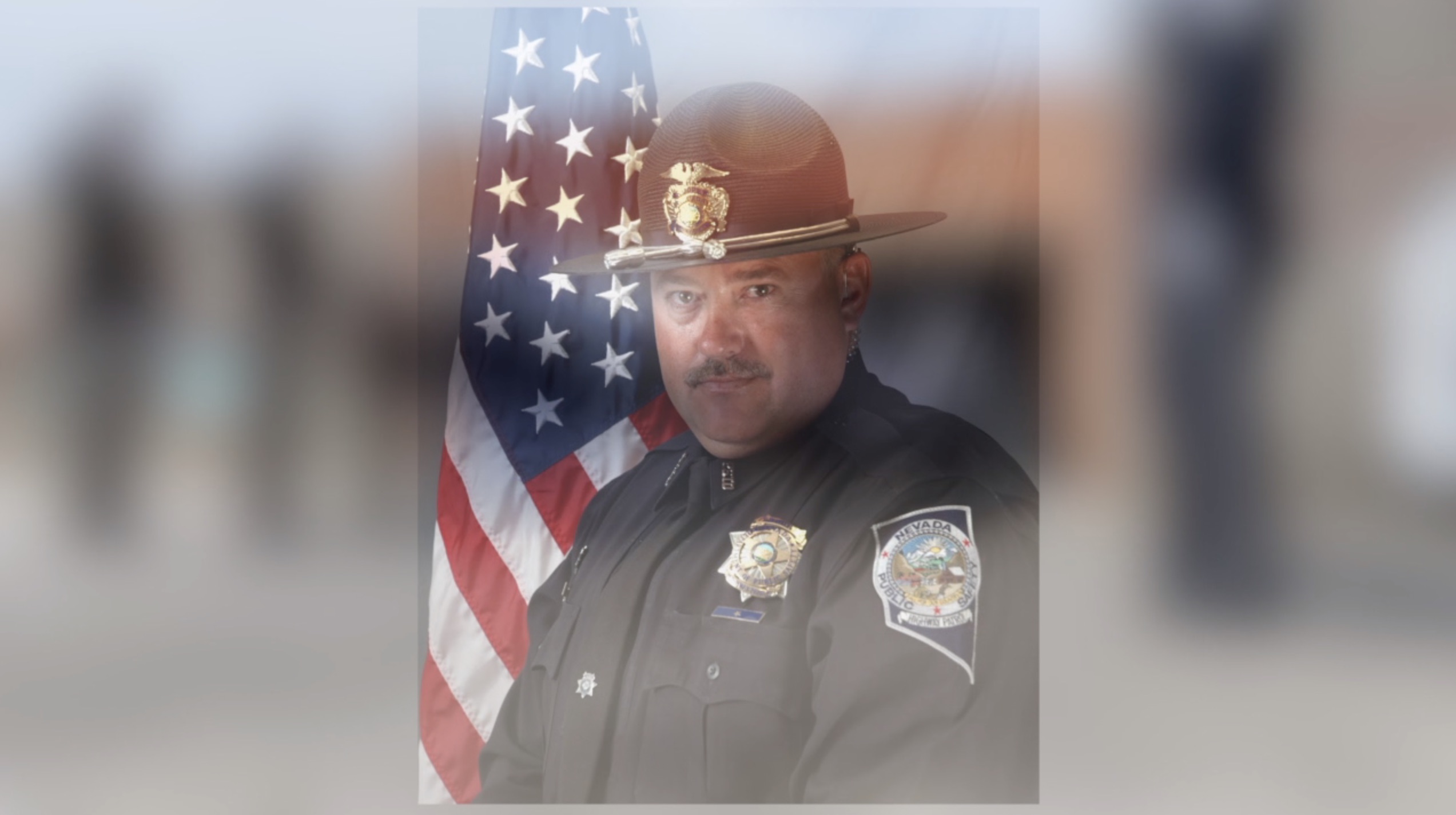 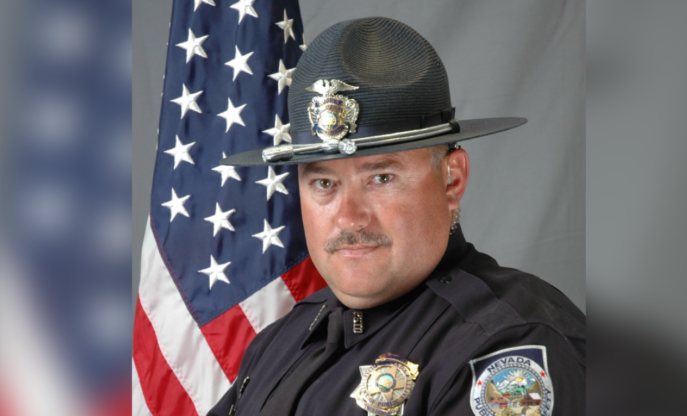 Sgt. jenkins' picture was also shown on marquees along the Strip.

MARCH 30 UPDATE: Flags will be at half-staff on Monday as the community continues to pay their respects to fallen hero Nevada Highway Patrol Sgt. Ben Jenkins, who was killed on Friday morning in the line of duty.

A memorial service has not been announced yet, but NHP's Public Information Officer in Elko, Natalie Hernandez, said the family will decide when that service will happen.

When a trooper dies in the line of duty, a full service with thousands of other law enforcement officers usually takes place, but that's not possible with the current coronavirus concerns. She said when a timeline is figured out, NHP will make sure Sgt. Jenkins receives everything he deserves.

"It will be huge. Full honors, full respect to him and there will be no detail left out. He will be fully honored," said Hernandez.

MARCH 28 UPDATE: Sgt. Ben Jenkins, who was killed on Friday morning, has arrived back in Elko.

His body was transported to Clark County on Friday evening by procession. Early Saturday afternoon, the procession made the return trip to Elko, taking Sgt. Jenkins home.

Hundreds of people lined up in various towns along the way, many of them waving flags as the procession passed by.

10:30 P.M. UPDATE: The Nevada Highway Patrol led a procession for their fallen trooper Friday evening, as they brought Sgt. Jenkins to the coroner's office.

Gov. Sisolak also ordered the flags of the United States and the state of Nevada to be flown at half-staff at the state capitol and all state public buildings and grounds until sunset on March 30, as a mark of respect and remembrance of Nevada Highway Patrol Sgt. Jenkins.

1:30 P.M. UPDATE: The Nevada Highway Patrol has released more information. After the shooting, the motorist stole Sgt. Jenkins' uniform and left the scene of the shooting.

Following a search that lasted several hours, the suspect, 65-year-old John Dabritz of White Pine was located and taken into custody with the assistance of multiple agencies.

47-year-old Sgt. Ben Jenkins was an Elko native who devoted his life to public service and to serving Nevadans.

He began working for the Nevada Highway Patrol in March 2008 as a Trooper in Jackpot and was promoted to Sergeant in Elko in 2017.

In 2011, Jenkins received the Nevada Department of Public Safety’s highest honor, the Gold Medal of Valor, which is presented to officers who perform an extraordinary act of heroism.

“Without question, Sgt. Jenkins was a hero to his community, his law enforcement colleagues, the State of Nevada and our country,” said Director George Togliatti. “This is a tremendous loss for the Nevada Highway Patrol, his family, and everyone Sgt. Jenkins touched during his long and honorable career in public service. My thoughts and prayers are with his loved ones during this period of mourning.”

Sgt. Jenkins is survived by his wife, his mother, four children, and five grandchildren. This is a time of tremendous grief for our agency, his family, and our communities. A memorial service is pending and that information will be forthcoming. The Nevada Highway Patrol will hold a press conference at 3 PM from the NHP Southern Command Headquarters (4615 West Sunset Road, Las Vegas).

12:30 P.M. UPDATE: The Nevada Highway Patrol has released the name of the trooper killed Friday morning.

We are devastated to report that Sgt Ben Jenkins #4196 was killed in the line of duty this morning. He had stopped to assist a motorist on US-93 in the White Pine county area and was fatally struck by gunfire. Sgt Jenkins devoted his life to public service and to serving Nevadans pic.twitter.com/O1T7ls79VT

Kathy and I were absolutely heartbroken to learn of the tragic and senseless killing of Sergeant Ben Jenkins, a 12-year veteran of the Nevada Highway Patrol, military veteran, husband, father to four, and grandfather to five. Ben dedicated his life to serving his country as a member of the Army and Air National Guard, a volunteer firefighter, and public servant for the Nevada State Fire Marshall Division and the Nevada Division of Forestry. A Gold Medal of Valor recipient, the Department of Public Safety’s highest honor, Sgt. Jenkins heroic actions as an officer undoubtedly saved many lives throughout his career in law enforcement. Our hearts go out to Sgt. Jenkins’ wife, his children and grand children, and the entire Elko community for this irreplaceable loss. May he rest in peace – Sgt. Jenkins will never be forgotten.

10:30 A.M. UPDATE: The Eureka County Sheriff's Office has confirmed that the trooper who was shot this morning is dead. They also say that the shooter has been taken into custody.

NHP says that the trooper had stopped to assist a motorist on U.S. 93 shortly before 6 a.m. in White Pine County near Ely.

Multiple shots were fired and the trooper was shot.

Law enforcement in the area is currently searching for the shooter.