Most Wanted in Las Vegas for week of July 16

A shooting at a grocery store parking lot on July 19 at the 7900 block of Blue Diamond Road likely stemmed from a robbery, according to an early investigation by Las Vegas police. No one was injured during the incident. After the shooting, the suspect got into a newer white BMW 4-door with tinted windows, driven by a black male adult with dreadlocks. The vehicle left east on Blue Diamond Road.

The suspect is described as a black male adult with a medium build and a beard. He was last seen wearing a black long sleeve shirt and blue jeans.

On July 18, at approximately 3:45 pm, a suspect entered and robbed a bank in the 7400 block of West Lake Mead Boulevard, near Tenaya Way. He used a threatening note and robbed the bank. He fled westbound on foot on Lake Mead.

The suspect is described as a black male adult, 5'10 to 6', 50 years old, medium build, last seen wearing a black "Nike" hat, black sunglasses, white shirt and blue jean pants while carrying a black bag. Anyone with information is asked to call Crime Stoppers at 702-385-5555. 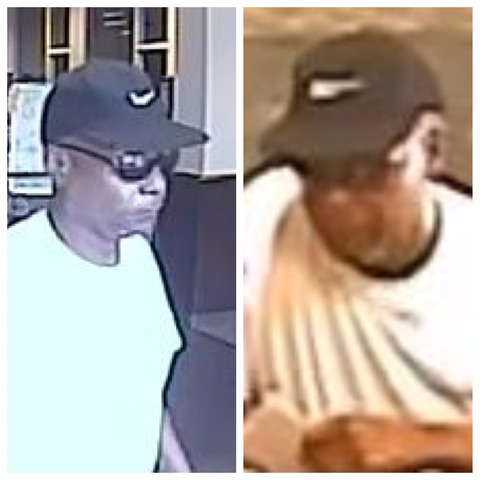 Las Vegas police are looking for a man and woman who may have stolen jewelry and other miscellaneous items from a home in the area of West Cheyenne Avenue and North Buffalo Road on July 10. The first person is described as a white male adult, 30-40 years old, medium build, wearing a tan fishing style hat, Nike T-shirt with large print "Just Do It" and black shorts. He was wearing knee braces on both knees. He was seen driving a newer white Ford F-150 with extended cab with chrome wheels and a chrome grill. The second person of interest is described as a white female adult, 30-40 years old, medium build, wearing a blue shirt. She was last seen in a gold 2000's Chevy Trail Blazer. A third person was seen in the vehicle and could only be described as a white male adult. Anyone with any information about this incident, or information about the identity or whereabouts of the persons of interest, is urged to contact the LVMPD Northwest Area Command Patrol Investigations Section by phone at 702-828-8577.