Most Wanted in Las Vegas for week of Feb. 11

Henderson Police are seeking the public’s assistance to identify a man who robbed a U.S. Bank on Feb. 4.

The male suspect entered the bank, located at 2511 Anthem Village Drive, near Eastern Avenue, at about 12:20 p.m. He passed a note to a bank teller demanding money from the bank employee. The employee handed over an undisclosed amount of cash and the suspect walked out of the bank.

The suspect is described as a black male adult, approximately 5 feet 7 inches tall and weighing between 175-180 pounds. He was last seen wearing a red long-sleeved shirt with the word “Affliction” in white lettering, eyeglasses, and denim pants. 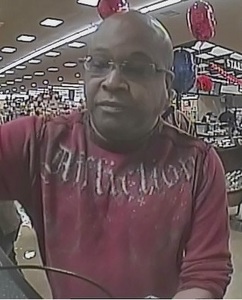 Police are asking for help locating a man wanted in connection with a robbery at a restaurant near Tropicana and Polaris avenues. According to a media release, a man wearing a hoodie over his head approached the counter and demanded money from an employee. He left after receiving the cash.

The robber is listed as a black male, 5 feet 10 inches, 160 pounds, in his 30s, and unshaven. At the time of the robbery, he was wearing black pants and a gray GAP hoodie sweatshirt. He also had a noticeable bruise under his right eye. 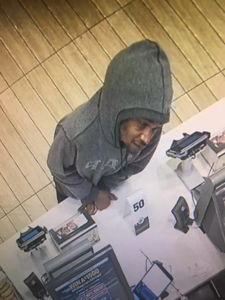