Most wanted in Las Vegas for week of April 16

The suspect simulated a gun and received an undisclosed amount of money.

Since April 9, there have been three events in which three suspects have entered retail stores located in shopping centers and take merchandise from the stores. The events occurred in shopping centers located near South Las Vegas Boulevard and the 215 (Town Square) and West Sahara Avenue and the 215 (Downtown Summerlin). In all three events, the suspects, who were all wearing hoodies with the hoods up, entered the stores during business hours and approached the tables where the merchandise was displayed. They each grabbed as many items as they could and ran from the store to a vehicle parked nearby. The suspects can only be described as three black males in their late teens or early 20s, each wearing hoodies with the hoods up. The suspects arrive and leave in a newer silver Chevy 4-door sedan.

Police are looking for a man who robbed a business near East Charleston Boulevard and Pecos Road at approximately 8:10 p.m. April 6. The man pretended to have a gun. He is a Hispanic male in his 20s, 5-feet 11-inches tall and 160 pounds. 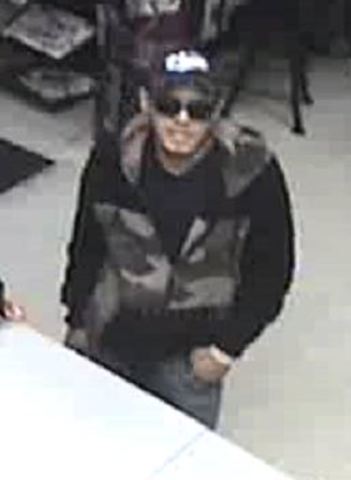