Most wanted in Las Vegas area for week of June 11

Two suspects robbed a business in the 3300 block of Glen Avenue on June 16. One pulled out a firearm and ordered employees to the ground while the other kicked and fought with the 91-year-old business owner. They stole cash and merchandise, then fled in a '90s model Buick 4-door vehicle, faded green in color.

Police say a man in his late 40s or early 50s robbed a bank on June 16 in the central part of the valley. The suspect is approximately 5-feet 11-inches tall, 170 pounds and has salt and pepper hair and a gray goatee. He was wearing glasses at the time of the robbery with tape wrapped around the bridge of the nose. 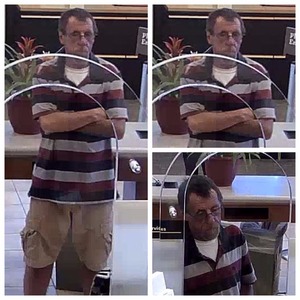 On June 4 around 12:50 p.m., an armed robbery occurred to an armored truck at the location of the 5300 block of Fort Apache Road, near Hacienda Avenue. The victim parked in front of a convenience store, went inside and completed the money pick up. He exited the business and a white 4-door Chrysler 200 pulled up and the passenger got out of the vehicle with a gun in his hand. The suspect told the victim to drop the bag and the victim complied. The suspect vehicle fled southbound on Fort Apache.