Most wanted in Las Vegas area for week of July 2

Las Vegas police are asking for help in locating the following suspects. Anyone with information is asked to contact the police or Crime Stoppers at 702-385-5555.

On July 7, Las Vegas police tweeted out a picture of Marcus Cain, who is wanted for Attempted Murder. He is described as a black male adult, 30 years old, 6 feet tall, and 140 pounds.

Three suspects took an undisclosed amount of money from a business clerk at gunpoint on June 28 at 5:21 a.m. The first suspect is a Hispanic Female, about 5 feet 5 inches tall, 150 pounds, medium build, and a medium complexion. She was last seen wearing a purple shirt, blue jeans, and gray shoes. The second suspect is a Hispanic Male, about 5 feet 10 inches, 180 pounds, medium build, and a medium complexion. He was wearing a gray baseball hat, a light blue security uniform shirt with a white/yellow/black patch on the right shoulder, blue jeans, and black and white tennis shoes. The third suspect was a Hispanic male, about 6 feet tall, 160 pounds, thin build, and a mustache. He had a red baseball hat with a black bill, a black sweatshirt, and black gloves.

On April 25 at 10:45 p.m., a male suspect struck a woman with his fist in a parking lot near Fremont Street and 6th Street. The suspect took her wallet and got into a Jeep with an unknown person. As the vehicle was driving away, the woman grabbed the door handle of the vehicle and was pulled to the ground, causing her to hit her head. She was taken to the hospital and treated for non-life threatening injuries. Detectives also learned the Jeep belonged to another man, and a report was taken for vehicle theft.

Police are looking for a person of interest that may be connected to the crime. He is described as a Hispanic male adult, about 5 feet 8 inches tall, and weighing between 160 and 180 pounds. He has black hair, a goatee, and multiple tattoos on his arms and hands, including a possible "S" on his neck.

The Las Vegas Metropolitan Police Department reported on July 5 that a suspect stole a wallet near Sahara Avenue and Durango Drive. He then tried to use the victim's card. No other information is available at this time. 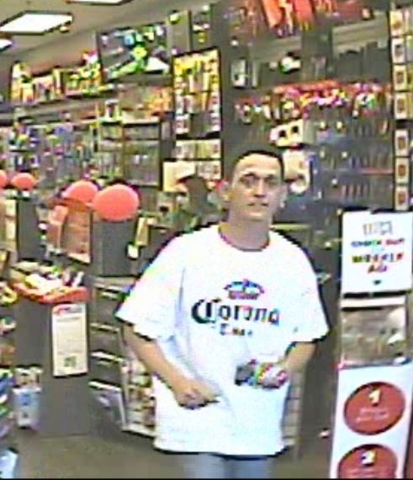 Las Vegas police are looking for a suspect in an attempted bank robbery June 26. Police did not specify the location.