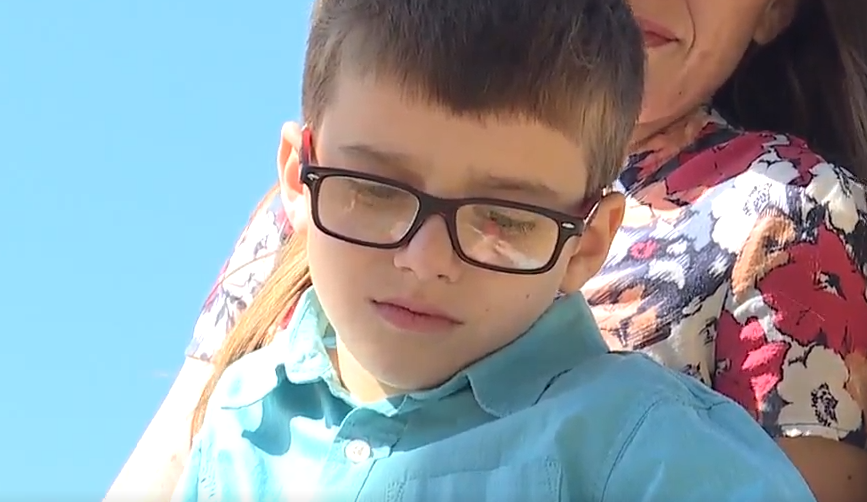 LAS VEGAS (KTNV) — Las Vegas Metropolitan Police Department is in search of a hit-and-run driver they believe nearly killed an 8-year-old boy on his bike at The Vistas Park in Summerlin on Wednesday.

That bike ride for Spencer Powell will never be the same, as a day after the ordeal he said he was still a little frightened.

Powell was on his bicycle at the stop sign at Alta, and Park Vista Drives ready to cross when a white Dodge truck did not make a complete stop.

"Both the bike and my son were pulled under the truck. The driver continued going," Amy Powell said, Spencer’s mother.

The boy took a few hard hits and was bruised in the crash.

"If I hadn't worn a hamlet I’d have a broken bone," Spencer said.

Spencer's father, Brady Powell, was grateful that it wasn't any worse.

"When your kid disappears underneath a truck you don't know what you're going to find," he said.

Brady and his wife Amy were upset the driver didn't bother to make sure their son was okay and are now stuck with medical bills.

The LVMPD has not made any arrests.

However, the family has posted signs around the park in hopes of getting more details shared about the driver.

"We’re looking for any information from anybody who was at the park that day or anyone who frequents that area knows of a similar white truck," Amy said.

"[I’m] feeling very disgusted and angry after the crash but also grateful my son is alive," Brady said.

However, other bike crashes around the Las Vegas valley have turned deadly.

"Unfortunately, 2019 has been a horrible year bicycle fatality already," said Andrew Bennett, of the Office of Public Safety.

"We've experienced a 300 percent increase in bicycle fatalities from where we were this time last year," Bennett said.

In 2018, there were eight bicycle fatalities, but Bennett also said one death is too many.

He hopes the statistic encourages people to wear helmets.