Copyright 2017 Scripps Media, Inc. All rights reserved. This material may not be published, broadcast, rewritten, or redistributed.
Austin Carter

UPDATE OCT 25: Police have arrested John Wayne McGuire in connection to a bank robbery on Oct. 21 in the 7000 block North Durango Drive.

Las Vegas officers arrested McGuire last night in the 1600 block of Casino Drive in Laughlin. McGuire is being held on two counts of robbery, one count of burglary with a firearm, and a fugitive warrant.

UPDATE OCT 24: Las Vegas and Bullhead City police are looking for an elderly man who is accused of committing at least 2 bank robberies.

13 Action News was curious as to why an elderly person may turn to a life of crime. We spoker with former FBI Special Agent in Charge and ABC News Contributor Steve Gomez. He told us that is probably because the man is desperate.

The only difference between the robbery on Tuesday in Bullhead City and the robbery on Saturday in Las Vegas was the bank robber's hat choice. Gomez pointed out that the man made no effort to conceal his identity during either crime.

UPDATE OCT. 23: Las Vegas police say the elderly man accused of robbing a bank on Saturday in Las Vegas is also the suspect for a Bullhead City bank robbery.

That robbery happened at approximately 9:40 a.m. Oct. 17. The elderly man entered a U.S. Bank on Highway 95, gave the teller a note, and showed the teller a gun in his waistband. He then left with an undisclosed amount of money.

Anyone with information about the Bullhead City robbery is asked to call 928-763-1999.

Police are looking for an elderly man accused of robbing a Chase Bank on 7000 North Durango Drive, near Elkhorn Road.

The robbery happened around 9:28 a.m. Saturday. Police say the man, who is possibly in his 70s, displayed a weapon to the teller and demanded money. He fled the scene in a gold mid-2000s Dodge Caravan.

The suspect is described as a white male, 65-70 years old, 6 feet tall, 160 pounds, short hair, grey trimmed beard, and prescription glasses. He was wearing a dark color Fedora hat, a dark colored jacket with a hood, a blue shirt, and light colored pants.

No injuries were reported. Anyone with information about this case should call Crime Stoppers at 702-385-5555. Tips leading to an arrest through Crime Stoppers may result in a cash reward.

#BREAKING: @LVMPD investigating a bank robbery near Durango & Elkhorn. Robber got away, Metro searching for a man possibly in his 70's @KTNV pic.twitter.com/hrapwRE8yd

The incident is remarkably similar to a robbery that took place in Bullhead City, Arizona on Oct. 17. On that date, an elderly male in his 70s robbed a U.S. Bank at gunpoint in the 2800 block of Highway 95, near Mohave Drive.

In the Bullhead City case, the suspect was described as a white male, approximately 6 feet tall, 170-180 pounds, and was wearing eyeglasses, an orange baseball cap, a white shirt, and a dark-colored jacket. He also fled in what appears to be a gold Dodge Caravan. 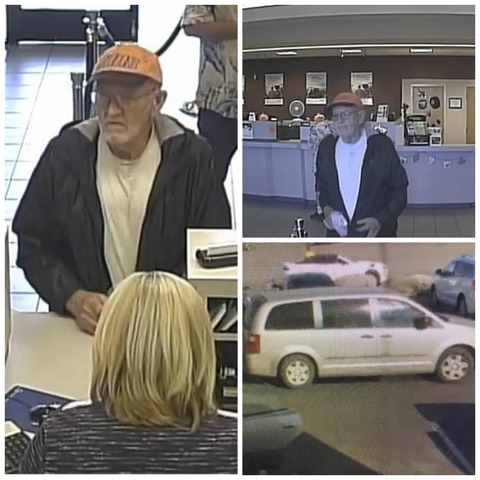 The Las Vegas Metropolitan Police Department says they're unaware if the two robberies are related.

Anyone with information about the case in Bullhead City should call Mohave Silent Witness at (888) 227-8780. A $750 reward is available for those who offer information that leads to an arrest.