Neighbors requested a welfare check after no one had seen or heard from him since early November. He was in his mid-70s. 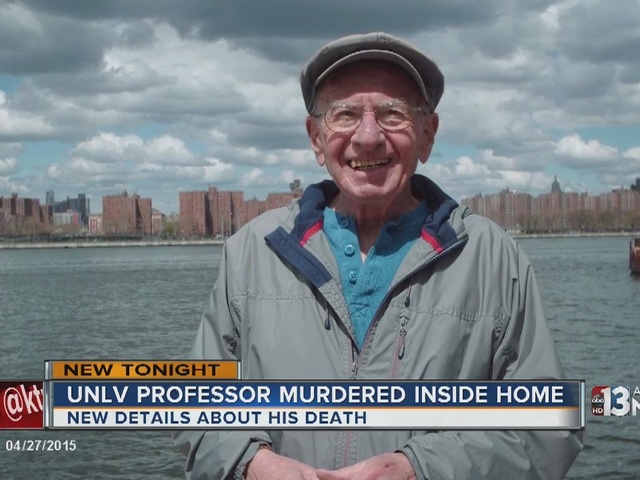 UPDATE ON DEC. 14: The Clark County coroner has identified the elderly man as 76-year-old Leroy Pelton from Henderson. Cause of death was multiple stab wounds. His death has been ruled a homicide.
Pelton was a retired UNLV professor. 13 Action News spoke to a few people who knew the professor before his death.
Joe Sacco says that he is struggling to understand why anyone would want to kill the professor who was gentle, compassionate and had no known enemies.
Sacco was a student of the professor's years ago. Sacco and Pelton were also both delegates for Bernie Sanders at this year's Democratic Convention in Philadelphia. He says that Pelton was his mentor.
Adam Littman, who met Pelton when he was a delegate, said the retired professor was level-headed, thoughtful and quiet. He also said that Pelton was witty.
Littman is now wondering how anyone could be so cruel to someone who wanted to help the people who needed it the most.
Police are still looking for the person or persons responsible for the professor's death.
ORIGINAL STORY
Police are investigating the suspicious death of a man found inside a Henderson home.
Henderson police officers found the man around 7:30 p.m. Saturday at the 2500 block of Swans Chance Avenue. Neighbors requested a welfare check after no one had seen or heard from him since early November. He was in his mid-70s.
An autopsy on Sunday revealed suspicious injuries on the victim. Therefore, detectives are investigating the man's death as a homicide. The final autopsy results are pending.
The name of the man will be released by the Clark County Coroner after he has been positively identified and his family has been notified.
Anyone with information about this case is urged to contact the Henderson Police Department at 702-267-4911. To remain anonymous, call Crime Stoppers at 702-385-5555.
Copyright 2016 Scripps Media, Inc. All rights reserved. This material may not be published, broadcast, rewritten, or redistributed.