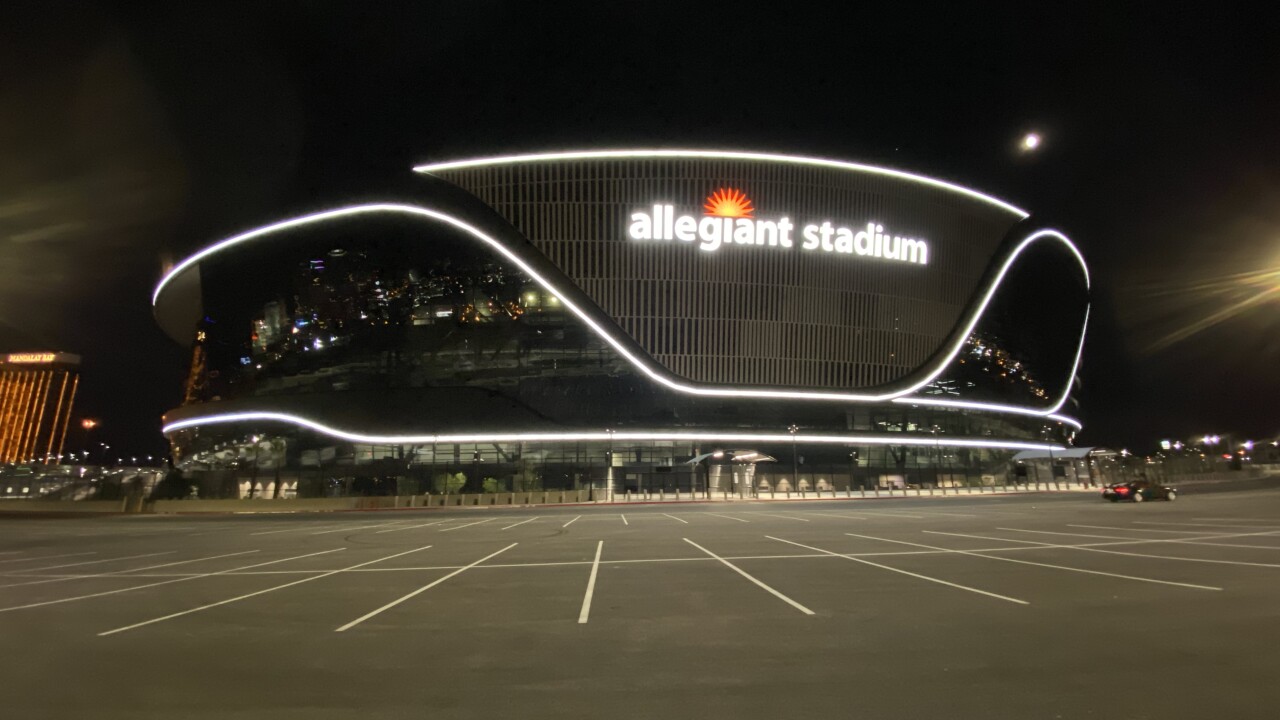 Joe Bartels, Reporter, KTNV
These are photos of Allegiant Stadium in Las Vegas Nevada as seen in July 2020 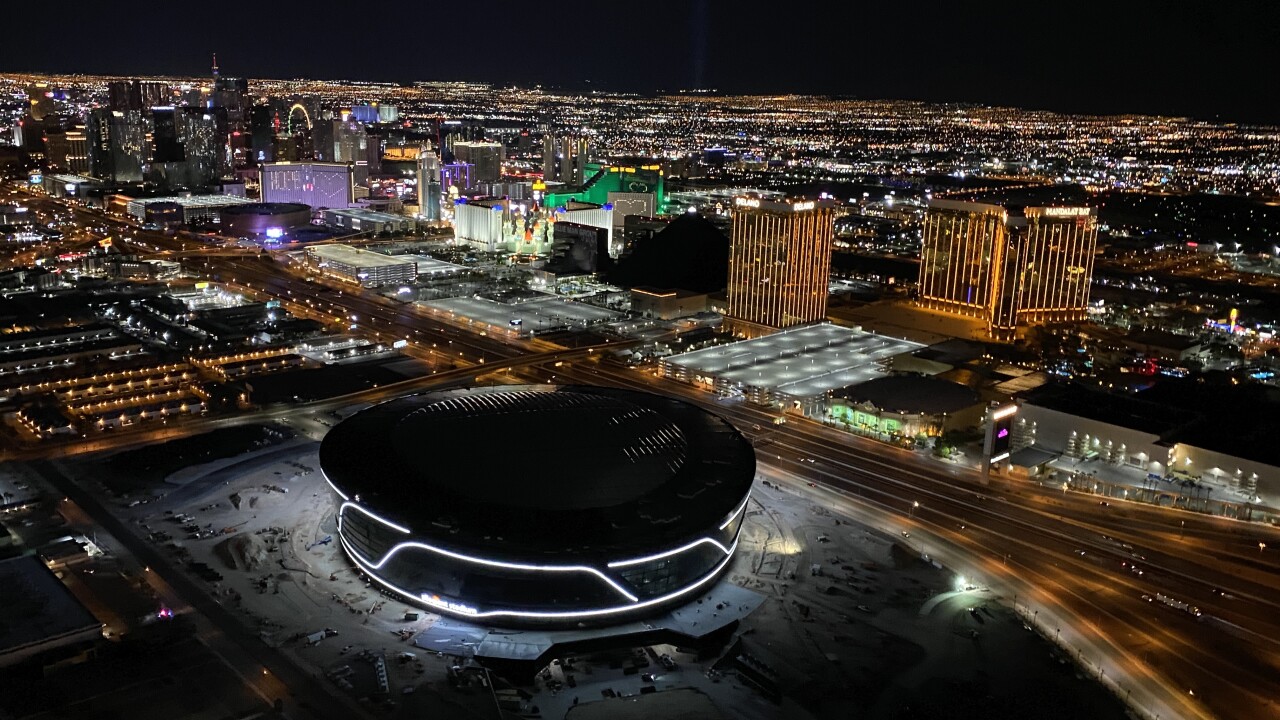 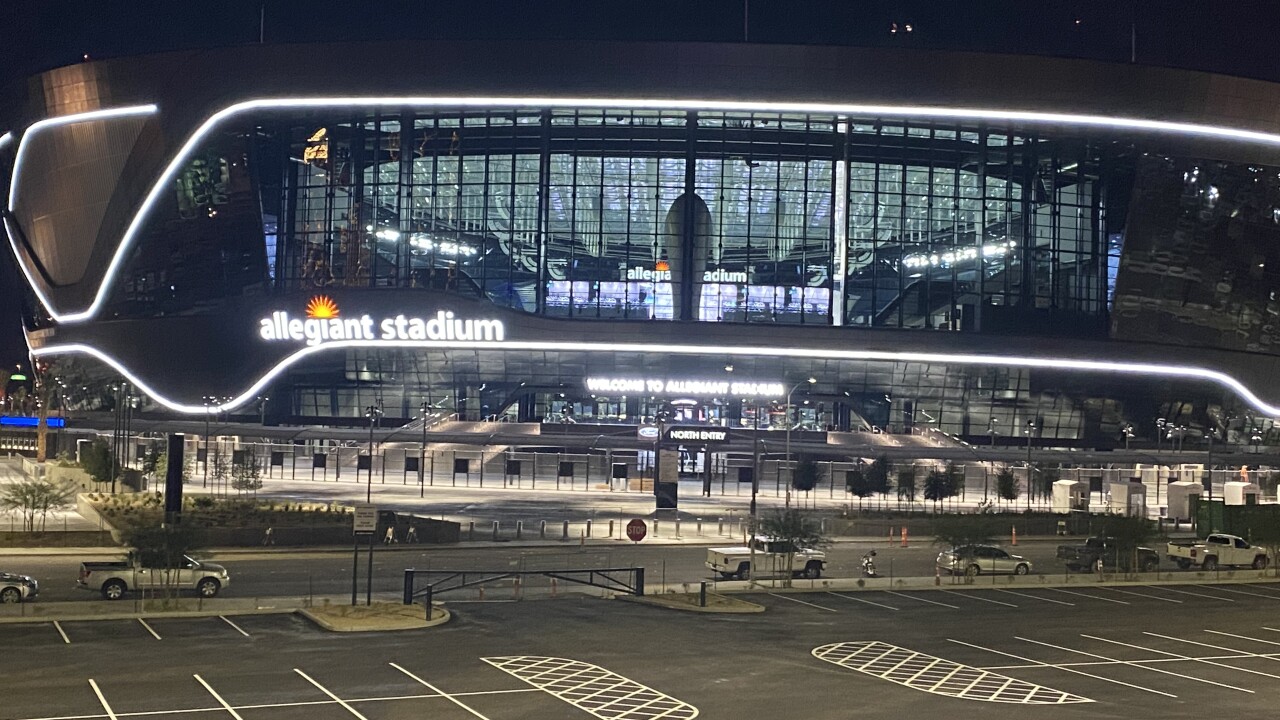 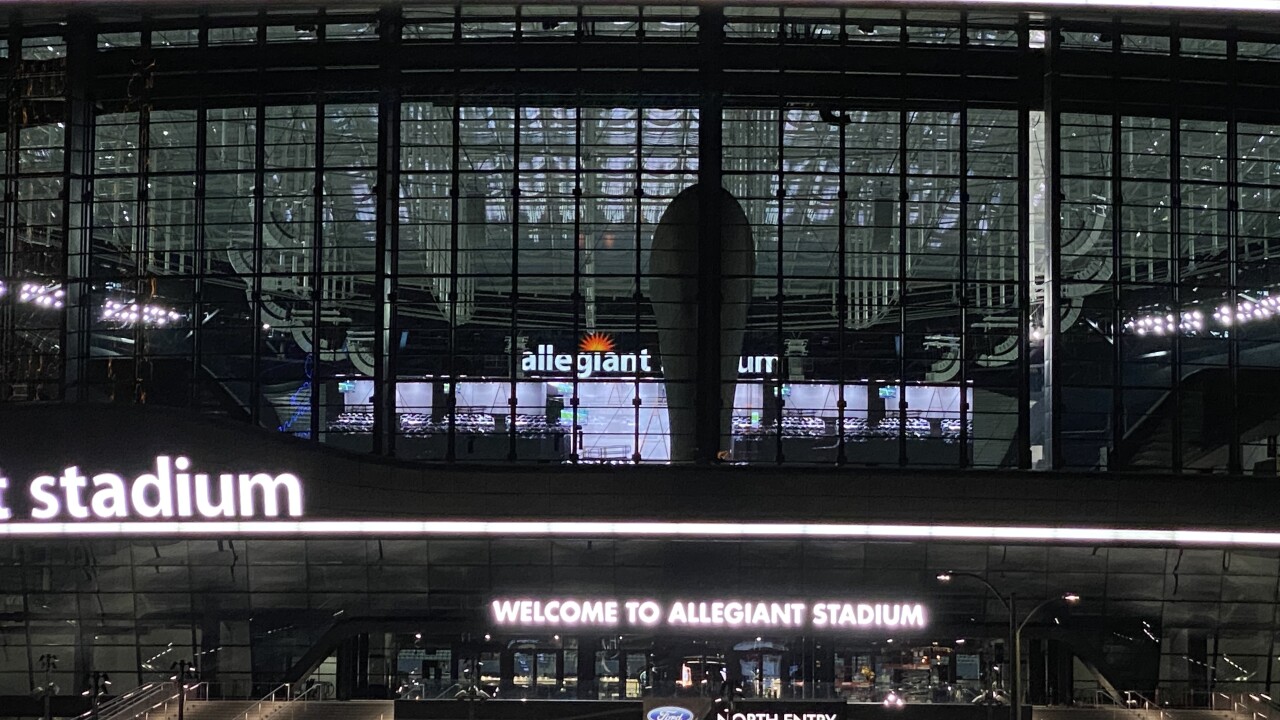 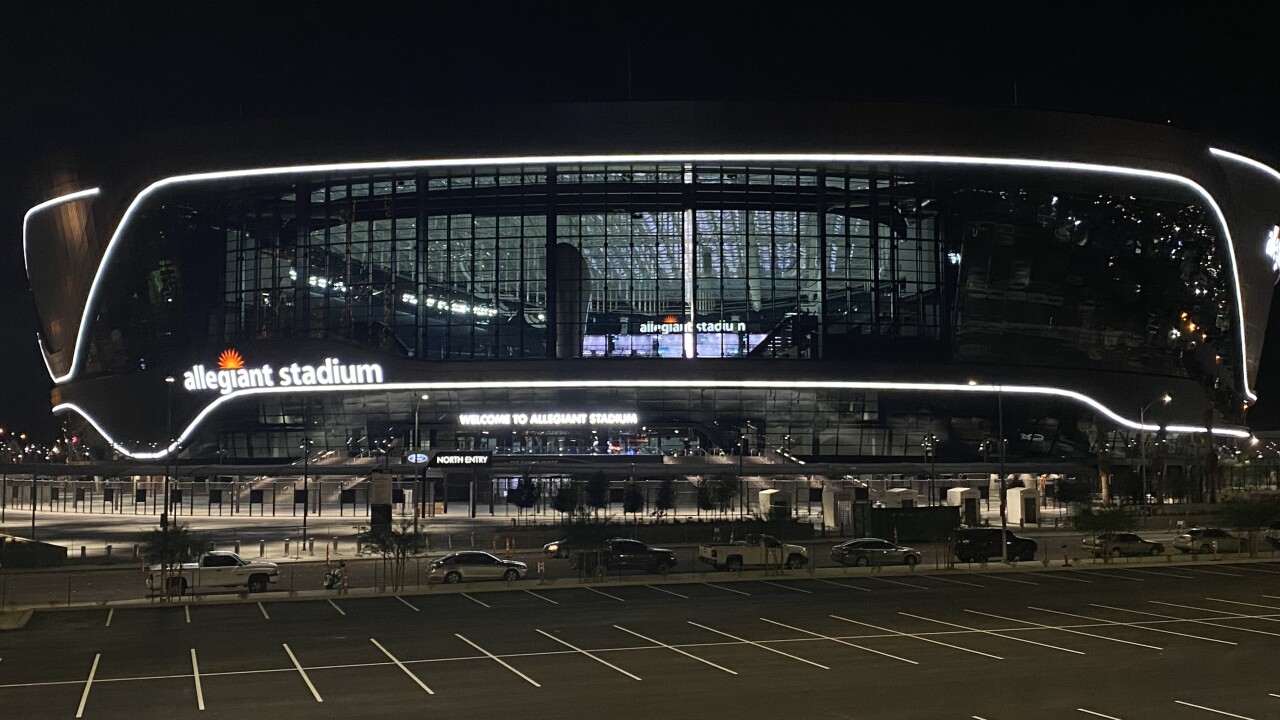 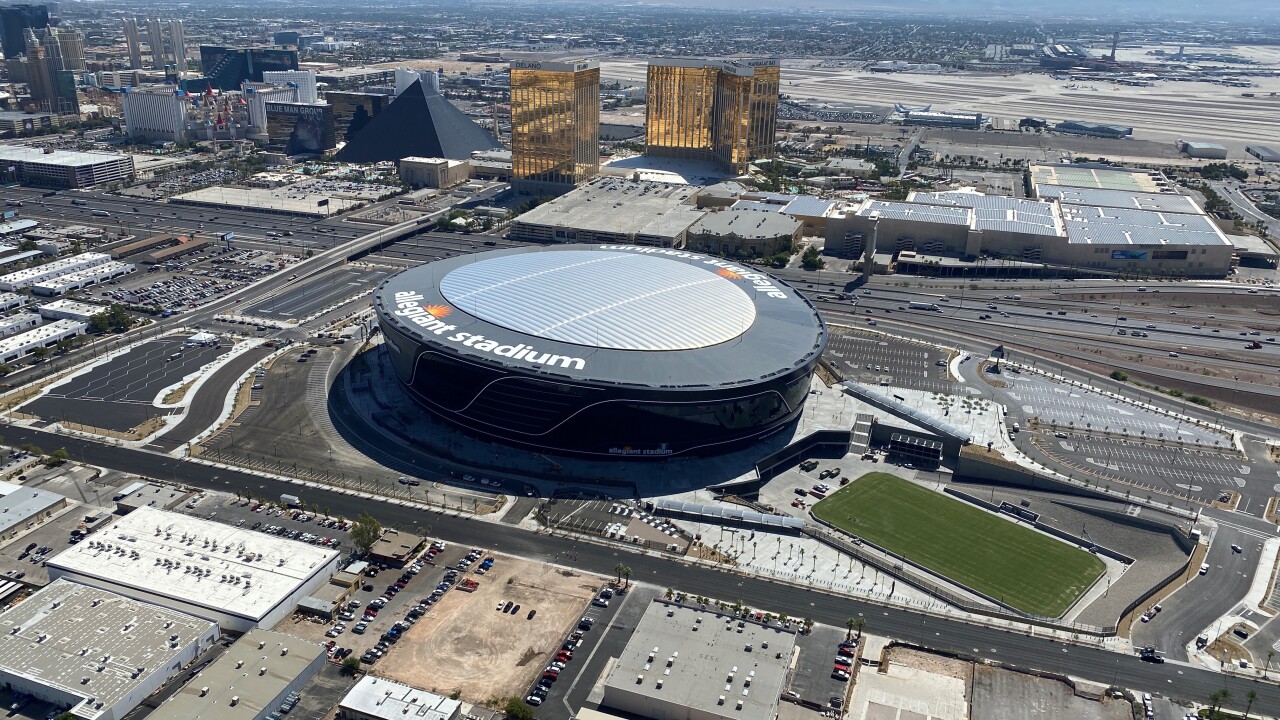 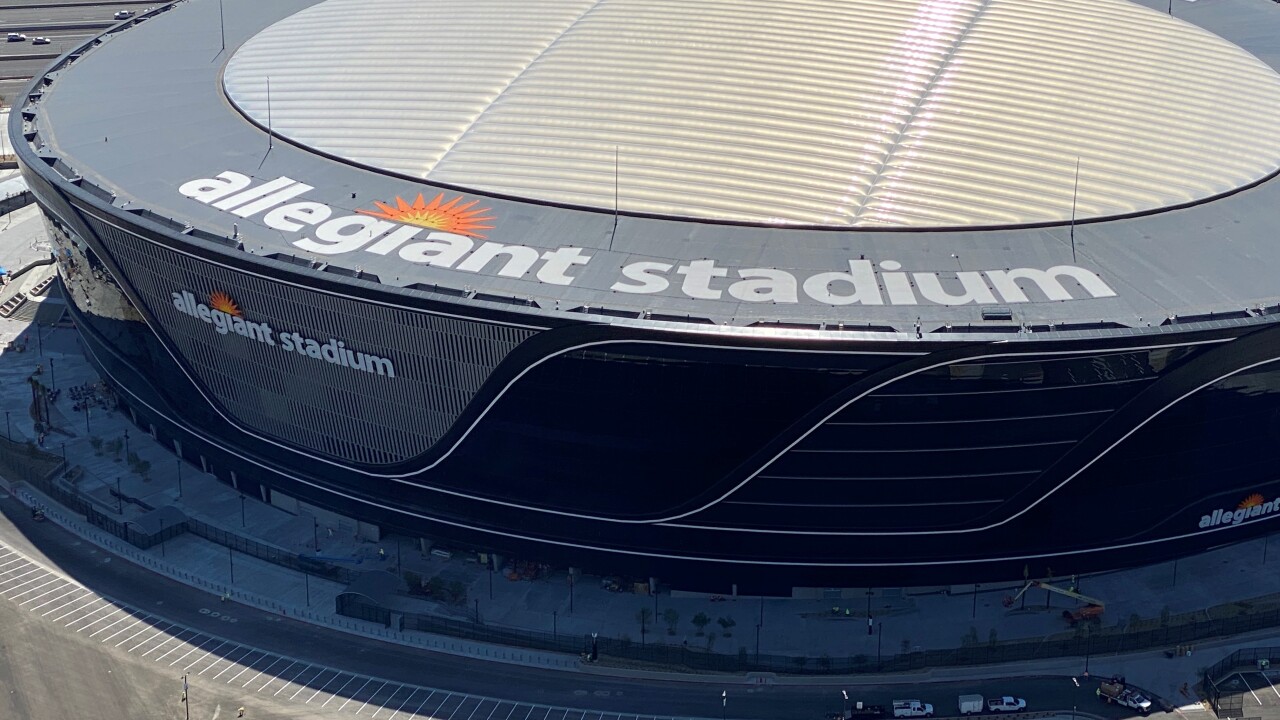 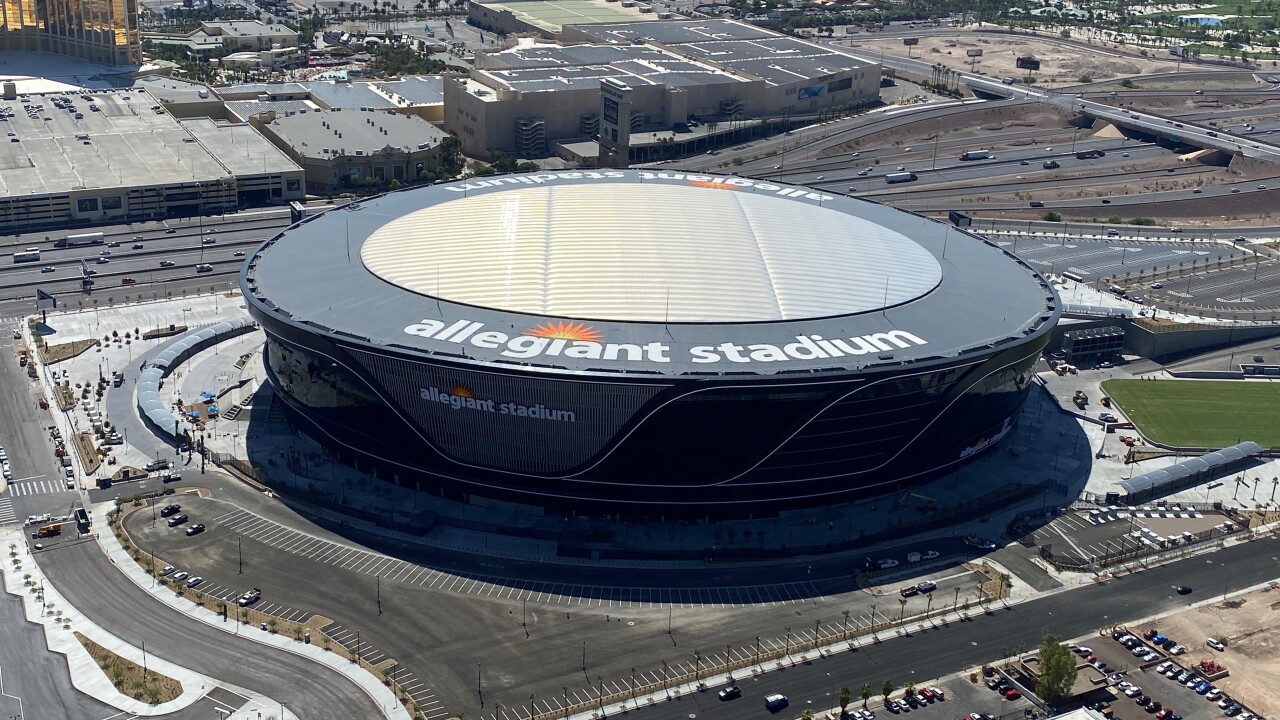 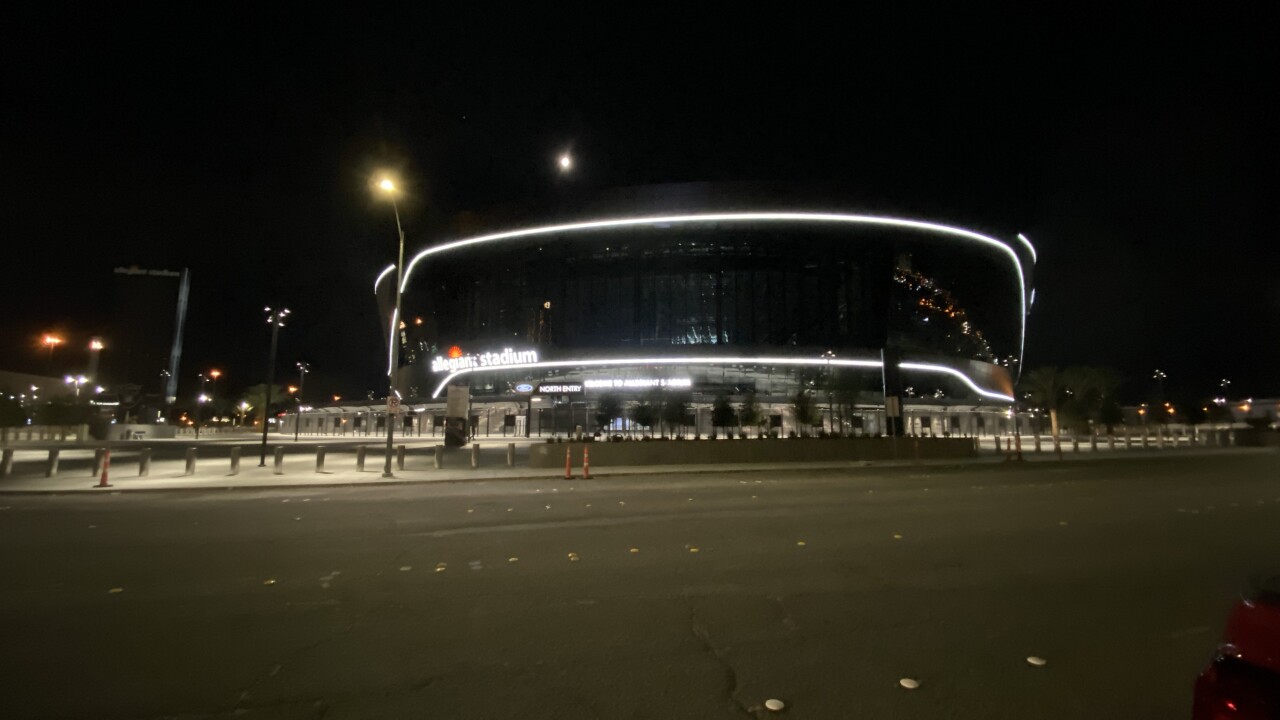 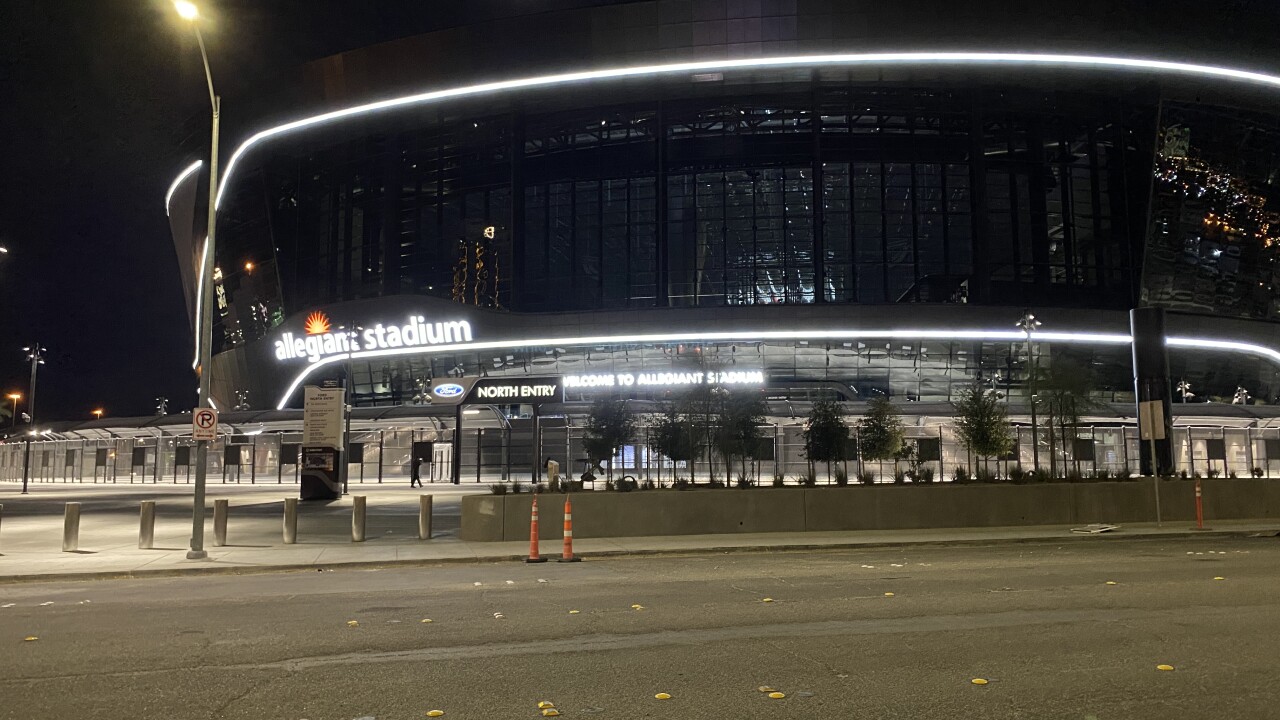 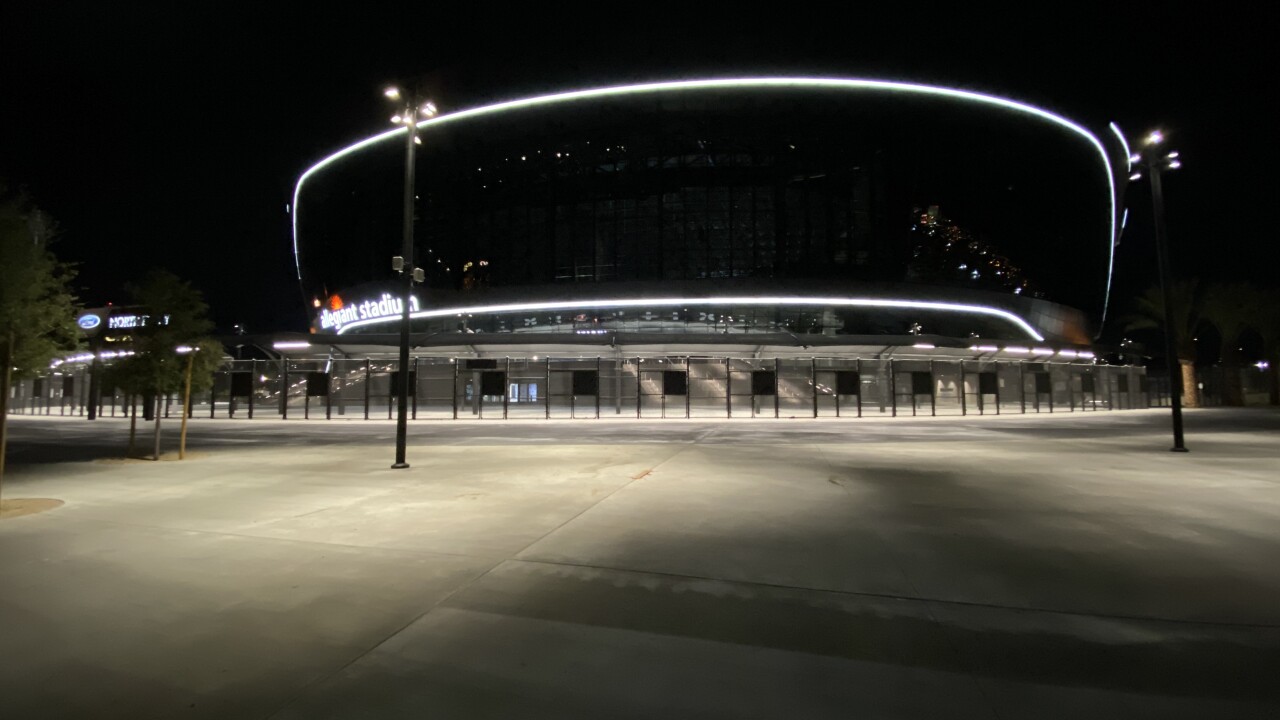 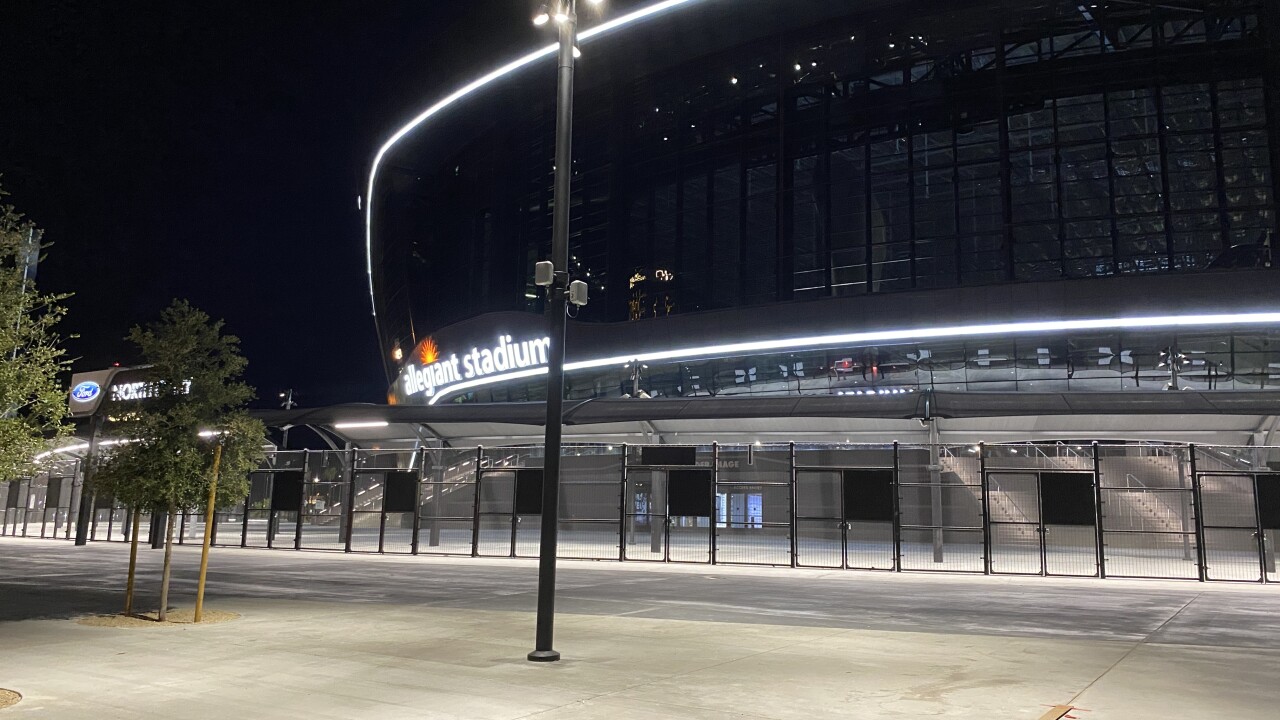 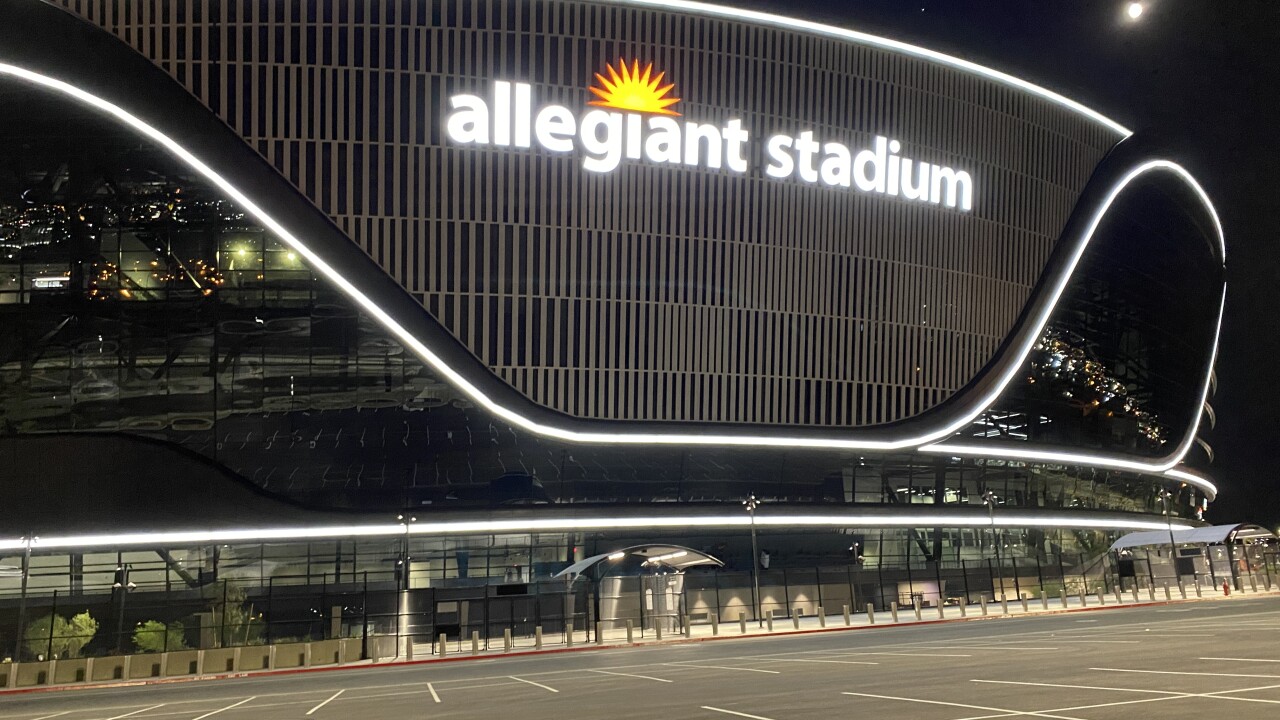 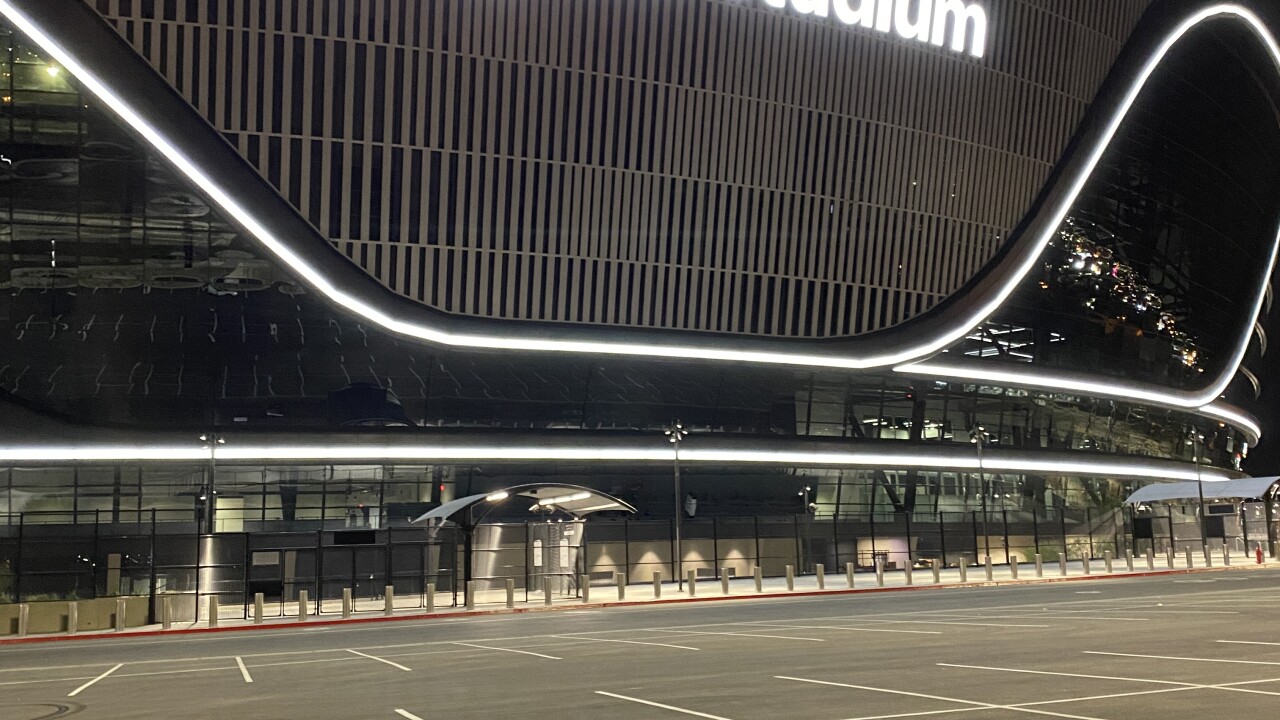 LAS VEGAS (KTNV) — Allegiant Stadium, the massive, nearly $2 billion dollar project next to the Las Vegas Strip is mostly completed, but the future of in-person events is in limbo.

The project took about five million work hours and two and a half years to complete.

July 31, 2020, was the target date for substantial completion of the project, but the date came and went with little fanfare, no ribbon-cutting, and no public event, Friday.

A tweet by the construction company behind the project showed an empty stadium with people dressed in hard hats and safety vests on the field, all of them socially distanced.

A quiet ending to a project that started with a literal bang when construction crews blew up dirt to begin construction in March 2018.

Raiders fans can only watch from a distance as the NFL 2020 season approaches.

"It's heartbreaking because we prepared and we were so excited for the Raiders to be in Vegas and to be home and to celebrate," said Rich Villa, a long-time Raiders fan who lives in Las Vegas.

Villa is a season ticket holder for both the Raiders and for UNLV football.

"It's like you're waiting for Christmas, to open the presents and all of a sudden: sorry, Christmas isn't here because we're not going to be able to open presents this year, it's kind of like that," said Villa, of the disappointment COVID-19 has brought.

The NFL has yet to release details on how teams will carry out the season and how fans would be able to participate in-person.

Last week, NFL Commissioner Roger Goodell announced all preseason games for the 2020 season were canceled because of COVID-19 health concerns.

It remains unclear if fans will be allowed in stadiums in time for the start of the regular season.

KTNV's sister station, ABC15 in Phoenix, reports the Arizona Cardinals have canceled season tickets for the upcoming season amid the COVID-19 pandemic.

Season ticket holders will among the first fans allowed to purchase tickets to upcoming home games, if fans are allowed inside State Farm Stadium, according to a release sent to ABC15.

Credits would be issued for 2020 season ticket holders toward the 2021 season.

The Raiders organization has not announced the 2020 season ticket situation yet.

"Obviously there's a cloud of uncertainty as the project enters its operations phase and development phase," said Jeremy Aguero, with Applied Analysis.

Aguero has been the stadium's analyst since the beginning.

"I don't want to minimize the challenges we are facing in our community today, the idea was for the stadium to come online, to be packed to the brim with fans, many of them would've come from out of town, would've stayed in our hotels, flown through our airports and eaten at our restaurants," said Aguero.

Aguero says it's nearly impossible to calculate the true money losses for postponed or canceled events at Allegiant Stadium.

He estimates the total economic loss is likely in the hundreds of millions of dollars and will cost thousands of promised new jobs associated with the stadium's operation.

Large events like the Garth Brooks concert, which was set to be the venue's first gathering on Aug. 22, has been rescheduled for Feb. 2021.

Villa wonders about the PSL holders at Allegiant Stadium who were hoping to enjoy the facility and possibly making a return on their investment.

13 Action News reached out to the Raiders organization on Friday for input into this story but a request for an interview was not granted.