The Las Vegas Metropolitan Police Department is currently investigating a shooting that was reported at Mezpah Street and Washington Avenue.

Posted at 2:35 PM, Jun 01, 2016
LATEST UPDATE: Two suspects were taken into custody on June 22. They are 18-year-old Anthony Martinez and 19-year-old Ocean Camacho. Both were booked into the Clark County Detention Center and are facing two counts of murder with a deadly weapon and other charges. They were arrested by the Criminal Apprehension Team.
THIRD UPDATE: The Clark County coroner has identified the deceased as 17-year-old Joshua Nunez of Las Vegas and 19-year-old Humberto Manual Ocegueda-Ramos of Las Vegas. Both of the victims were shot in the head. Their deaths have been ruled as homicides.
2ND UPDATE: Police say that the other victim has died.
UPDATE: Police say one of the victims has died. The other person is in critical condition.

Police say two people in the white SUV you see in picture were shot. One died, other is critical condition @KTNV pic.twitter.com/pZEOa5KAQJ

The victims, who were riding in a white SUV, were shot in the head by someone firing from another vehicle. The incident may have began at a gas station near Martin Luther King Boulevard and Owens Avenue. Police say they have varying descriptions of the suspect's vehicle.
It is not known at this time what prompted the shooting and if it may have been gang or drug related.
ORIGINAL STORY
LAS VEGAS (KTNV) -- The Las Vegas Metropolitan Police Department is currently investigating a shooting that was reported at Mezpah Street and Washington Avenue.
The call came in at 2 p.m. It is reported that two people were shot and they were transported to the UMC Trauma Center.
13 Action News will post more information as it becomes available.

Just arrived at scene of shooting. 2 people taken to hospital, no word on condition. @KTNV pic.twitter.com/RzsI9XRwHA 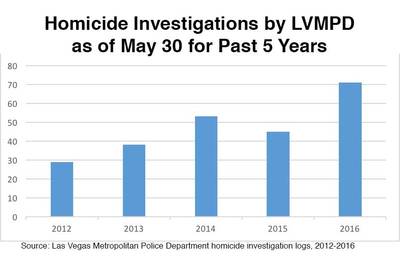