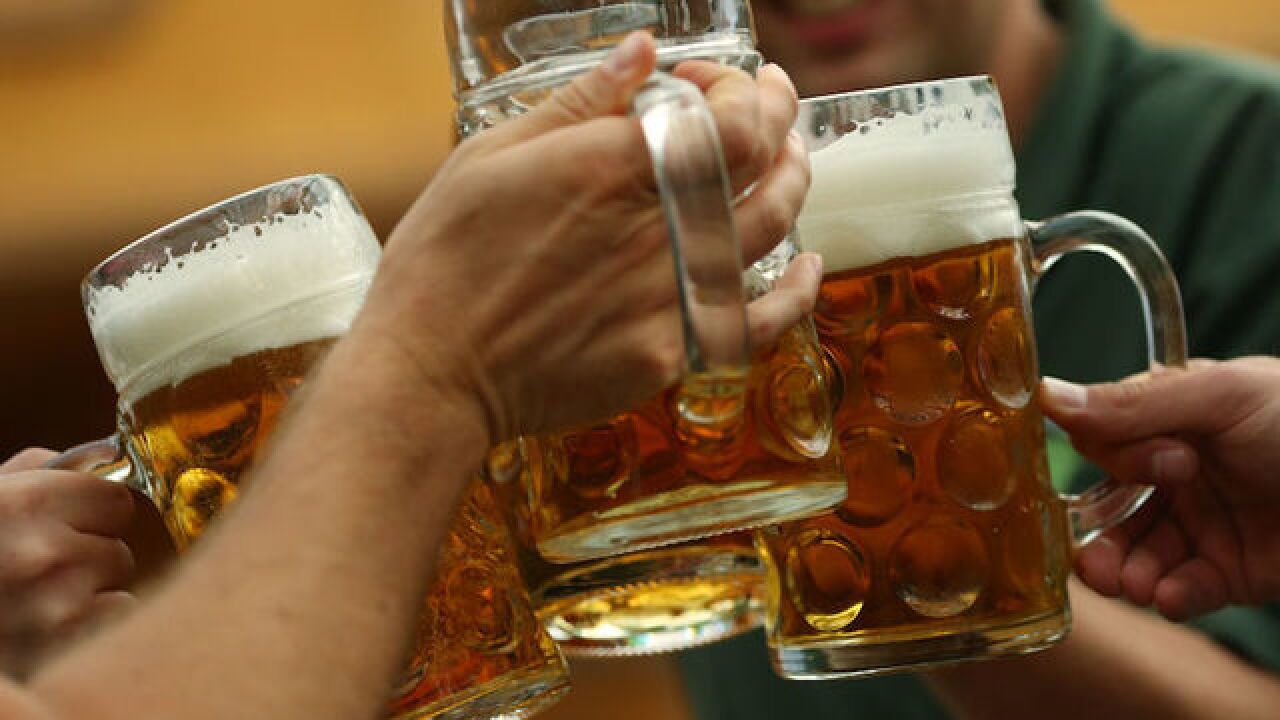 Image copyright 2018 Getty Images. All rights reserved. This material may not be published, broadcast, rewritten, or redistributed.
Sean Gallup
<p>Revelers celebrate with beer in the Armbrustschuetzenzelt tent on the opening day of the 2018 Oktoberfest beer festival on September 22, 2018 in Munich, Germany. </p>

Beer is the prom king of alcoholic beverages, winning the popularity contest in terms of total volumes drunk. And because its main ingredient, barley, is sensitive to extreme drought and heat, climate change will cause undue pain for all who love their lager, new research suggests.

Global warming will lead to substantial decreases in barley crop yields, causing beer shortages and a sharp rise in the price of a pint, according to a study published Monday in the journal Nature Plants.

Gathered in a bar after a series of lectures in China, Guan and a group of climate change scientists wanted to find a new way to collaborate.

"We were drinking beer," he said, and they thought, "Maybe we can do something on beer, because nobody has done that." The key question was obvious and direct: How much more will we pay for a pint of beer? What will be the climate change impact on luxury essentials?

"We came up with the term 'luxury essentials,' " Guan said. It refers to any item that's not a necessity (and not for everyone), "but for beer lovers, it is essential."

Hoisting their mugs, the team set a plan in motion. They examined scenarios resulting from climate change and then figured out the impact on global barley yields and beer prices. To accomplish this, they integrated three strategic models: one for climate, one for crops and one for economics.

Beginning with a model developed by climate scientists, they forecast temperature, rainfall, precipitation, soil moisture and other variables in both worst-case and less-severe scenarios. Next, they used these inputs for a crop yield model, which allowed them to simulate the growth of barley crops worldwide.

Under climate change, "the majority of countries will have a decline in barley," Guan said.

Still, there will be differences among nations, with the United States and Australia probably producing more barley while China, Brazil and Japan produce less.

"Globally, only a small fraction of barley goes into making beer. Only 17 percent of the barley [goes into] making beer. The rest of the 83 percent is actually going to feed pigs and other animals, basically," Guan said, explaining that only good-quality barley is reserved for beer-making.

Because quality barley crops are even more sensitive to climate conditions than those of poor quality, the increase seen in some countries, such as the U.S., will not necessarily benefit the beer industry, Guan said. Additionally, U.S. producers will probably trade the barley "to make money rather than making beer for themselves."

On average, then, global barley yields will decline between 3 and 17 percent, depending on the severity of the weather, the study showed. The team put this output into a social economic model that included beer production estimates and international trading forecasts.

The United States in particular will see a 20 percent overall reduction in beer consumption under the worst-case climate change scenario, while the per bottle price spikes by 50 percent, Guan said.

Caroline Sluyter, program director of the nonprofit advocacy group Oldways Whole Grains Council, said the results of the new study "are in line with other papers."

"There's a pretty well-understood connection between rising temperatures, reduced water supplies and the impact on crop yields," said Sluyter, who was not involved in the research.

The three big cereal crops for human consumption are corn, wheat and rice, she said: "Those three make up about 50 percentof the world's calories, so they're huge in people's diets."

By comparison, barley is less important. "It grows as far north as areas of the Arctic circle; it grows in tropical Ethiopia; it grows at high altitudes in the Andes," she said. "So you do see it being a small part of diets around the world.

"It has more fiber than any other whole grain," she added. "Barley is also very high in antioxidants and vitamins and minerals." Studies show that barley reduces cholesterol, helps control blood sugar and improves immune system function overall.

Whole grains in general are a "sustainable food choice," Sluyter said. "They require less water than almost any other category of crop."

The new study, then, "raises a lot of important question about how our food supply is going to adapt to a changing climate," she said. About 75 percent of the world's agricultural land is used for animal production -- yet meat supplies only 17 percent of our calories, she said.

"Taking time as a global culture to really think about where we need to be putting those [agricultural] resources to maximize the quality of our food supply is a question that is becoming an increasingly important," Sluyter said.

Meanwhile, Guan is concerned with the price of beer. In some small countries, such as Ireland, Estonia and the Czech Republic, the price will really spike under climate change, with a predicted drop in per capita consumption of 75 percent in Ireland alone, he said.

"Really, the countries who love beer will suffer a lot," he said. Though he and his highly educated friends are fans of the brew, he believes beer is also a "working-class" drink. A shortage would probably lead to social instability, such as occurred during the Prohibition period in the United States.

"This is something I don't want to see happen," he said. "People should learn from the past. If you want to have the choice for not only beer but chocolate, coffee, tea, cigars -- all of those crops are very much vulnerable to climate change."