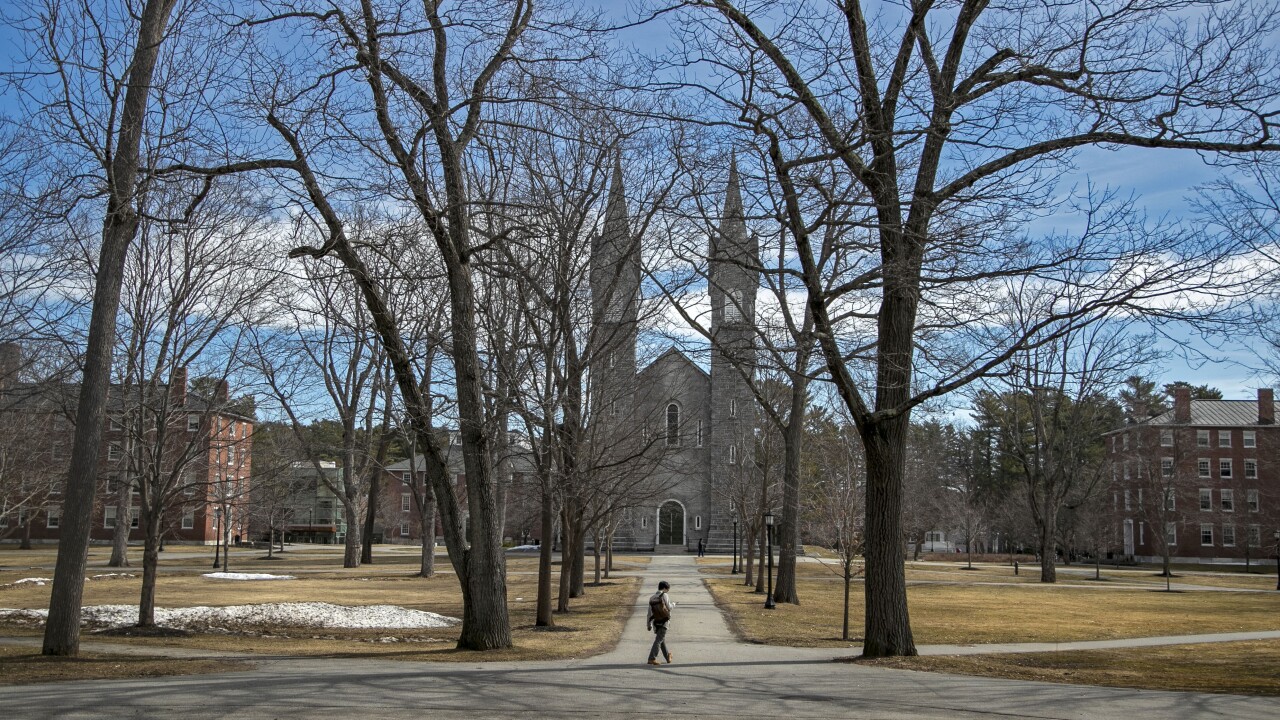 Copyright 2020 The Associated Press. All rights reserved.
Robert F. Bukaty/AP
The Bowdoin College campus is nearly empty during spring break, Wednesday, March 11, 2020, in Brunswick, Maine. The school has announced that it's asking students not to return to campus following spring break and will hold classes online due to concerns about the coronavirus. Maine still has no confirmed cases of coronavirus.(AP Photo/Robert F. Bukaty)

Tuition bills are coming due, and while millions of students across the country are weighing the risks of going back to college in the middle of a pandemic, the most financially strapped students carry an added burden of dwindling aid.

For Americans living in the lowest income brackets, college represents a way up the socioeconomic ladder. But getting there and obtaining a degree is not easy, especially for students without financial means. The Pell Grant has historically removed some of the obstacles for the most at-need students. But alongside the skyrocketing cost of higher education, the federal grant is having less and less of an impact.

The Pell Grant is the largest source of postsecondary education grant aid, helping to fund higher education for at-need students since 1973. In its budget proposal for the 2020-21 school year, the U.S. Department of Education anticipated giving Pell Grants to 6.8 million at-need students, to the tune of $29.6 billion.

How much each student qualifies for depends on their expected family contribution, or how much the federal government says they should be able to contribute toward their own education. Those with the most financial need could qualify for the maximum allowable grant amount: $6,345 in the 2020-21 academic year.

That authorized maximum amount has grown from $1,400 in the Pell Grant’s early years. Despite this growth, it has failed to keep pace with the ballooning costs of a college education.

In the past 20 years, average tuition and fees at public four-year institutions (the most affordable type conferring bachelor degrees) have more than doubled, to $10,440, while maximum Pell Grant awards have only grown 29%. And tuition isn’t everything — room and board, books and living expenses come at an additional cost.

As recently as 2002, the most at-need students would nearly be able to cover their entire tuition and fees at these lower-cost institutions by qualifying for the maximum Pell Grant. But now, those qualifying for maximum Pell awards would find it covers just 59%.

Not only has the Pell Grant not kept pace with college costs, it hasn’t kept pace with inflation. To have the same buying power as $1,400 did in the grant’s early days, the maximum award amount would need to be about $8,000 today.

According to data from the most recent National Postsecondary Student Aid Study, 90% of dependent full-time undergraduates from households in the lowest income quartile received a Pell Grant in 2016. Among independent undergraduates in that income bracket, 64% received the grant.

Gone are the days when a student’s job (or jobs) could cover their college costs. When grants and scholarships — free money — aren’t enough to cover the costs of education, those from households without college savings have little choice but to turn to borrowing. But student loan debt can be detrimental to lower-income students. A degree can confer higher earning potential, but for a variety of reasons — some of them financial — students in the lowest income brackets are typically the least likely to graduate, according to data from the U.S. Department of Education.

When a dependent student has exhausted grants and federal loan limits themselves, they can tap their parents’ borrowing potential.

Parent PLUS loans have been around since 1980, allowing parents to borrow up to the difference between the entire cost of attendance and the aid directly awarded to their student. Borrowers must pass a credit check, but there are no income requirements. As of the second quarter of 2020, these loans account for $99 billion or over 6% of all federal student loans outstanding, according to the Department of Education.

In 2016, 11% of dependent full-time students in the lowest income quartile at public four-year institutions benefited from federal parent PLUS loans, according to the NPSAS. That’s compared to just 3% in 1996. These loans typically amounted to $6,500 in 2016.

Federal PLUS loans come with higher interest rates and fewer repayment options than federal student loans. In the 2020-21 school year, PLUS loans are being offered at 5.3% interest compared with 2.75% for federal undergraduate loans. And should a parent run into difficulties repaying the loans — as they increasingly do, according to an analysis from the Brookings Institution — there is only one income-driven plan available. Income-Contingent Repayment plans lower monthly payments by capping them at a percentage of income, but increase the total amount paid over the life of the loan due to interest and an increased term length.

What students can do

Barring significant increases in need-based aid or significant decreases in college costs, lower-income students and their parents will often have to continue cobbling together their college funds from a variety of sources.

The following tips are applicable for anyone who doesn’t have their entire cost of college covered: