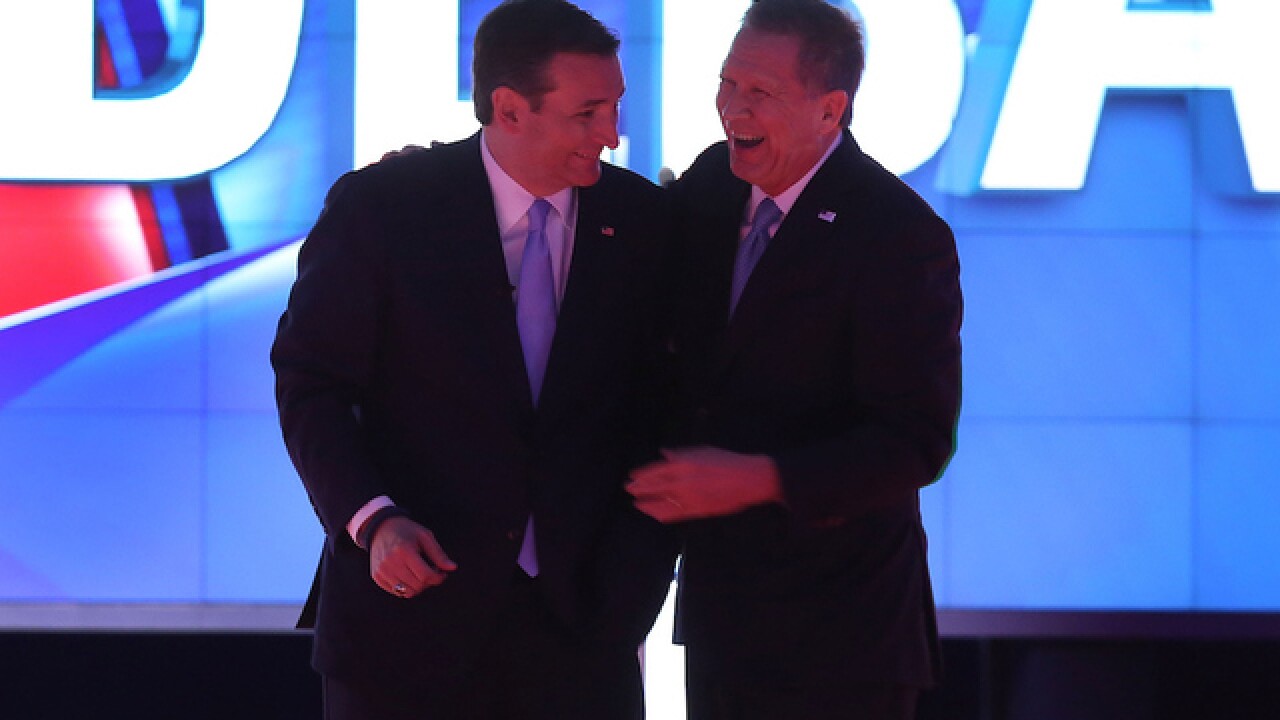 Ted Cruz and John Kasich have declared they will not withdraw from the Republican nomination race. They each have perfectly rational reasons.

It is bizarre, then, that neither Cruz nor Kasich is taking the obvious and most rational course of action to increase their prospects of gaining the nomination.  I don’t have a clue why they aren’t.

The strategy is simple: cooperate. The logic is simple, too.

Neither Kasich nor Cruz has any chance of capturing a majority of convention delegates on a first ballot.  Therefore, the only opportunity they have to gain the GOP nomination is through a brokered convention.

There can only be a brokered convention if Donald Trump fails to gain a delegate majority through primaries and caucuses.  By competing in every remaining state, Cruz and Kasich are creating the optimal conditions for Trump to gain a majority, severely undermining their own prospects.

The obvious and only rational response is for Cruz and Kasich to divide up the remaining states between them.  Trump would then be confronted with a series of one-on-ones.

For example, they would agree that only Cruz would campaign in Wisconsin, Indiana, Nebraska, West Virginia, Montana, New Mexico, South Dakota and California. Kasich would urge his supporters in those states to embrace the #NeverTrump cause and strategically vote for Cruz. Marco Rubio did this for Kasich in Ohio.

Rational, self-interested cooperation between competitors, even enemies, is a ubiquitous, intuitive, ancient strategy.

The best way to take on a playground bully is to gang up on him or her, not to pick one-on-one fights where the bully is destined to win.

When mobsters want to move on a powerful don, they divvy up the targets.They don’t all move into the same neighborhood or racket.

When businesses compete with a big, established player, they search for markets where they can be the sole challenger, not one of many.  When the small players coordinate their attacks, it is called collusion. But there is nothing illegal about collusion in politics.

Kasich has some proven experience with cooperation strategies as a successful legislator and governor.  Cruz, as far as I can tell, has had absolutely no success as a legislator (except acquiring notoriety) because he rejects cooperation. Perhaps that explains why he and Kasich are at a standstill.

The #NeverTrump movement has an overwhelming interest in a Cruz-Kasich pact.  Besides the benefits outlined, a rationally divided primary map would allow #NeverTrump organizations to more effectively deploy their resources – ground troops, surrogates and, of course, advertising.

The #NeverTrump contingent, however, has the same fatal deficiency as the Republican Party and its amorphous leadership: It lacks leverage -- the power to offer a deal Kasich and Cruz can’t afford to refuse.

It is at least conceivable that Republican mega-donors and their networks could collude quickly and refuse to give Kasich and Cruz any more money unless they cooperate. But there’s no history of such disciplined, fast strategic cooperation at that level. Besides, the political judgments of the GOP oligarchy this year have been especially bad.

None of this explains why Kasich and Cruz don’t do the smart thing independently of party pressure.  They have both assured voters in debate after debate that they are very, very smart guys.  One Kasich adviser, a GOP backroom veteran named Charlie Black has said publicly, “I think you could make a case for coordination.”

So what is the hold up?

One problem might be trust. Perhaps Cruz and Kasich don’t trust each other to hold up the bargain. Cruz certainly hasn’t earned much (any?) trust from his Republican colleagues in the Senate.

It would be rational to act on that mistrust if and if they had better options. They don’t.

I have been told that Kasich and Cruz won’t cut the rational deal for the simplest of reasons – ego.

Cruz and Kasich might stumble their way into a brokered convention anyway. Their latest strategic moves suggest they won’t be top players there.