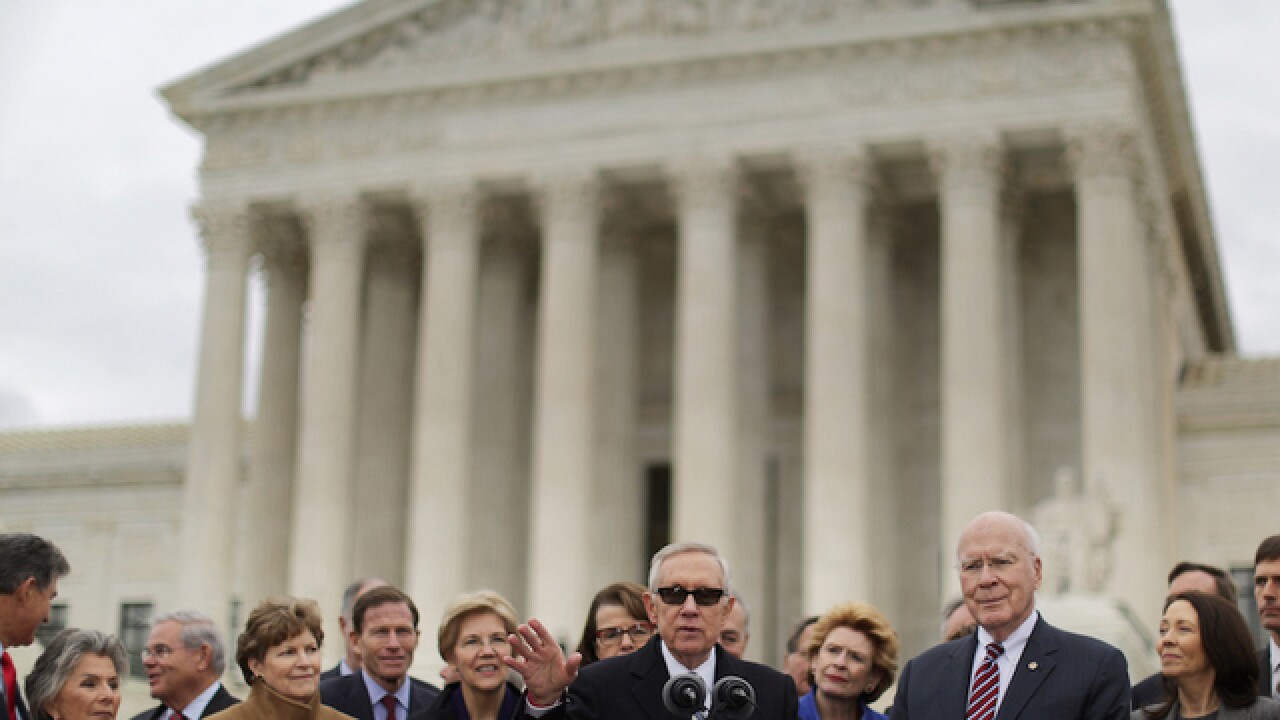 The big Supreme Court issues in the news now are not the right big issues.

Yes, the Republican’s refusal to even consider Merrick Garland, President Obama’s nominee to replace the late Antonin Scalia, is an important and outrageous story.  But the stakes are sky high.

The addition of just one justice to the Court will have immense consequences in law, policy and constitutional interpretation for years because the Supreme Court’s authority nowadays is, well, supreme.

Americans understand this, but could the framers of the Constitution ever have imagined that one Justice could matter so much?

That is the big issue. Not Merrick Garland. Not the spin from partisan shills in the U.S. Senate. That is crazy, at least according Larry Kramer.

“There's something wrong with your democracy when the death of a single person can have that much consequence for the future of the country,” Kramer said to me, with all the incredulous frustration of that boy who knew the emperor had no clothes.

Kramer is a constitutional lawyer and historian who recently stepped down as Dean of the Stanford Law School to lead the William and Flora Hewlett Foundation, one of the country’s biggest foundations.  He is the author of “The People Themselves: Popular Constitutionalism and Judicial Review,” an influential history of the contest over who should have the authority – or the power – to decide constitutional questions – the Supreme Court, the legislative branch, the executive or “the people themselves.”

Contrary to what most Americans and their representatives assume today, the Constitution does not give final authority to the Supreme Court.  The Founders intended to create a democracy; giving unelected judges ultimate power to decide which laws were constitutional and which weren’t is profoundly undemocratic. The Supreme Court was one player in the democratic process along with the other branches of government – and may the best branch win in any given dispute.

“Across most of American history, a big part of the debate was over who has final say over the meaning of the Constitution,” Kramer said.

Thomas Jefferson, Andrew Jackson and Abraham Lincoln all refused to enforce or comply with court rulings.  When Lincoln was elected, Congress added to the number of seats on the court to give Lincoln more power; after the assassination, Congress cut the size of the court to shackle Andrew Johnson. During Reconstruction, it slashed the Supreme Court’s budget to throw sand in its operating gears.

None of this was considered improper or too political. Big constitutional issues involve big issues and conflicts. The Constitution didn’t give one branch veto power on constitutional matters. They were to be decided by a democratic process, a necessarily political process. The branches of government and “the people themselves” would determine the balance of power that would and should prevail in adjudicating the great issues.

From the beginning, conservatives favored a supremely supreme Supreme Court as a check against too much democracy; liberals favored a court deferential to elected representatives.  This changed, in Kramer’s view, when the Warren Court issued its milestone civil rights rulings. After that liberals joined conservatives in bestowing the Supreme Court with the final say over the Constitution.

Old political practices for checking and balancing the Court were forgotten.

“These other tools for pushing back at the court which were traditionally used have been delegitimized,” Kramer said. “Suddenly, those are violations of the constitutional value of judicial independence.”

Today, the only political means to engage with the almighty Court considered “legitimate” is through the nomination process.  “Now every single Supreme Court nomination is a major political event,” according to Kramer. “Because we have turned over to them the kind of authority that they really never had before.”

Everyone knows the Republicans want conservatives on the court and Democrats want liberals. That’s fine. Just be open about it. Instead, the elected partisans torture nominees with accusatory questions spoken in a dishonest code about red herrings: judicial temperament, respect for the sacred texts and college term papers. They are a farce that insults citizens.

And now the Republicans have added a new twist: The Senate will only take up nominations made by Republican presidents.

Eventually, the curtain will fall on Mitch McConnell’s Potemkin Theater.

But the Supreme Court’s unusual and unquestioned supremacy is likely to continue.

And if you think this is a rather abstract, inconsequential issue best left to scholars, consider the ultimate example of the Court’s modern clout.

In the presidential election of 1876, the Louisiana voting results were contested and the outcome would determine the next president. The Supreme Court refused to get involved. This was a job for the citizen’s elected representatives, not judges.  There would have been riots if the Supreme Court butted in, it was thought.

In 2000, under similar circumstances, the Supreme Court in Bush v. Gore did just the opposite and decided the presidential election. Vice President Al Gore accepted the ruling “for the strength of democracy.”

“And you're kind of like, whoa! When did it become unpatriotic to push back when the Supreme Court has essentially just decided a presidential election?” Kramer said. “Something has gone very crazy in our democratic system when we can't resolve democratic questions through the democratic process.”

Donald Trump reminds us that there are other views. He wants “winners” to cut great deals, not some politically correct “democratic process.”

The threat of Trump’s authoritarian march on the White House aside, the unprecedented authority of the modern Supreme Court is fundamental development America’s political evolution, one that will be invisible in the coming theatrics in the U.S Senate.