Opinion: It's time for George W. and George H.W. Bush to come out against Trump 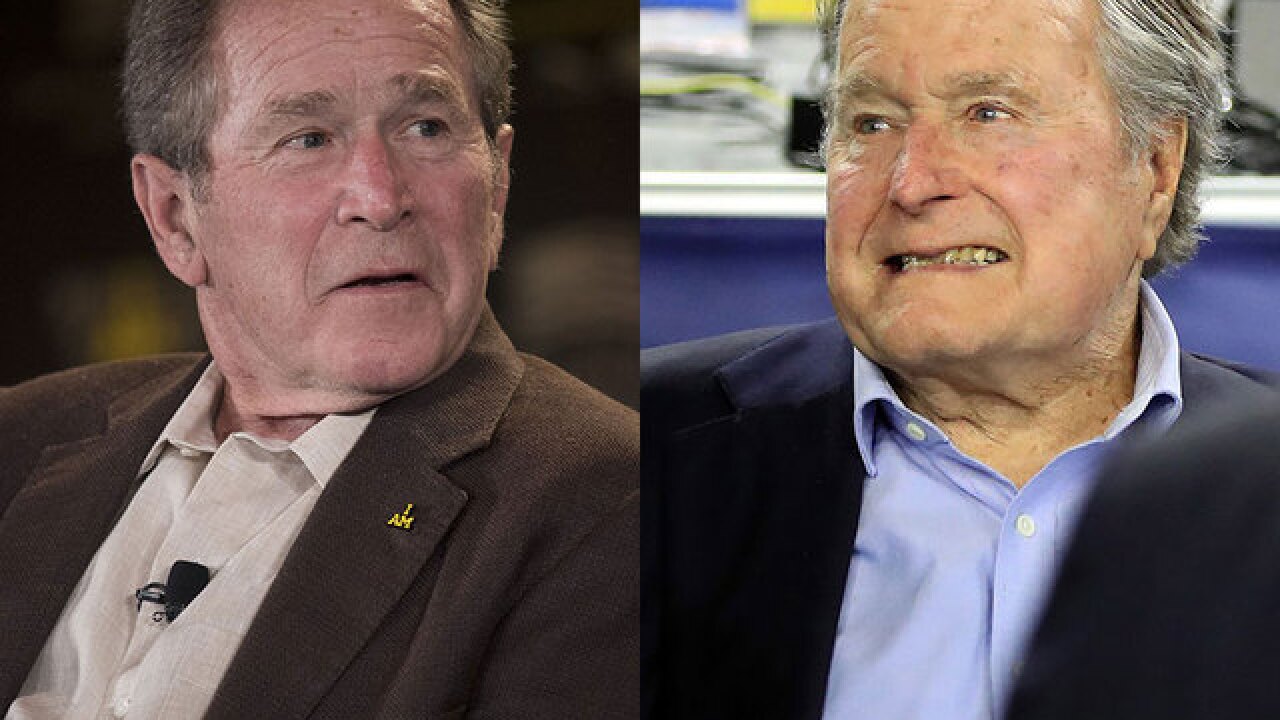 The first volume of Winston Churchill’s swashbuckling history of his war, World War II, bore the title, “The Gathering Storm.”

The storm set to hit America’s vulnerable democracy on Election Day has gathered. But unlike a typhoon, human intervention can prevent landfall and the inevitable devastation. (Courtesy note: If you do not believe that Trump profoundly threatens our democracy, national dignity, security and welfare, save yourself some irritation and find something more congenial to read than this column.)

Churchill’s second volume covers Great Britain during the German blitz in 1940, “the most splendid, as it was the most deadly, year in our long English and British history.” He called the book, “The Finest Hour.”

Will Americans muster a fine hour of our own and defeat the gathered storm that Donald Trump is riding and stoking?

I pose this question to two men in particular: George Herbert Walker Bush and George Walker Bush, America’s only living former presidents from the Republican Party.

The two ex-presidents’ silence at this historic juncture, to my thinking, is a weak, unpatriotic abdication of their moral duty. I hope against hope that I am dead wrong and they are waiting for the perfect moment to step forward and take a bold, unequivocal stand and join the battle to the end.

Would it make a difference in the vote if 41st and 43rd presidents opposed Trump full throttle? If they went all the way and endorsed Hillary Clinton? I certainly think so, but I wouldn’t bet huge big money on it in this Year of Unreason.

But I do know this. No voice, no preacher, no leader and no coalition so far have been able to geld Trump and Make America Sane Again.

Bush the Elder and his heir are about the only big league figures left who might – might – be able to cut through to undecided independents, alienated Republicans and wobbly Trumpkins.

The Republican primary candidates failed embarrassingly, especially Jeb Bush. The Republican leadership in Congress and the party disgraced themselves, a perfect, living Profile in Cowardice. The fifth estate doesn’t have the Kryptonite.

The person nominated for the mission is Hillary Clinton, but she hasn’t been able to lead a charge, though not for lack of effort. She simply doesn’t have the public goodwill, trust and rhetorical skill to cut through the fog and thunder. That is not to say she can’t win the election; she obviously can, but it will be largely in spite of her performance as a candidate.

President Obama has waged the finest fight of this hour. I’m sure there is more to come. But many voters susceptible to Trump’s spell wrote Obama off long ago.

I also know this: If the former presidents Bush stay in their Texas bunkers, they will have failed the country, disgraced themselves in the eyes of many, many Americans and doomed their legacies, which is already bleak for the younger Bush. They have a clear obligation to at least try to help lead a country at risk to a fine hour of resistance.

I cannot fathom why 41 and 43 haven’t stepped up already, or signaled their intent. I find it impossible to believe that the first President Bush doesn’t clearly see the crisis and need for his service, unless he is in worse health then we know. This could be his final and finest mission.

One possibility: The Bushes truly prefer Donald Trump to Hillary Clinton. I choose not to believe that. If they do, this column is monumentally stupid, as is my deep, well-informed respect for Poppy and my polite appreciation of his son’s public service.

There have been reports that the Bushes will not be disloyal to the Republican Party. I can understand how they might feel that way — for about one minute. But this ethical conflict is really no conflict at all: In a choice between duty to country and duty to party, duty to country should prevail. It would be shameful for the Bushes to put party first. It would be downright sinful to put the party of Donald Trump above duty to country.

Perhaps the Bushes think going public would backfire and help Trump. That’s remotely possible, I suppose. The mere possibility of a bad outcome, however, does not void the obligation to pursue the good.

Does the Bush family have some self-interested reason to play possum? I can’t believe that, but it would be the lowest of motives for abdication.

Time to man the ramparts is running out.

Don’t kid yourself that risks have been overblown.

The argument that Trump cannot win is wobbly, speculative and dangerous. Ignore it.

Complacent, worldly-wise assurances that our mighty republic will survive a Trump regime are lame; sure, the country will survive, but the likely harms to the worst off Americans – and immigrants, race relations, civil rights, economic equality, national security, our national standing and our basic dignity are unthinkable.

Many Americans are paralyzed and confused by how surreal it all is. The Trump threat just doesn’t seem plausible. But it is. And our standard political artillery and our common sense haven’t worked so far.

No Americans are in a better position to attempt a serious contribution to the war effort than George H.W. Bush and George W. Bush. The obligation is clear so let’s make sure our call for their help is, too.

The final volume in Churchill’s World War II book is “Triumph and Tragedy.” That’s something for all prominent and influential public figures to think about before November, especially our two former Republican presidents.