Does no-show convention point to a no-go Election Day? 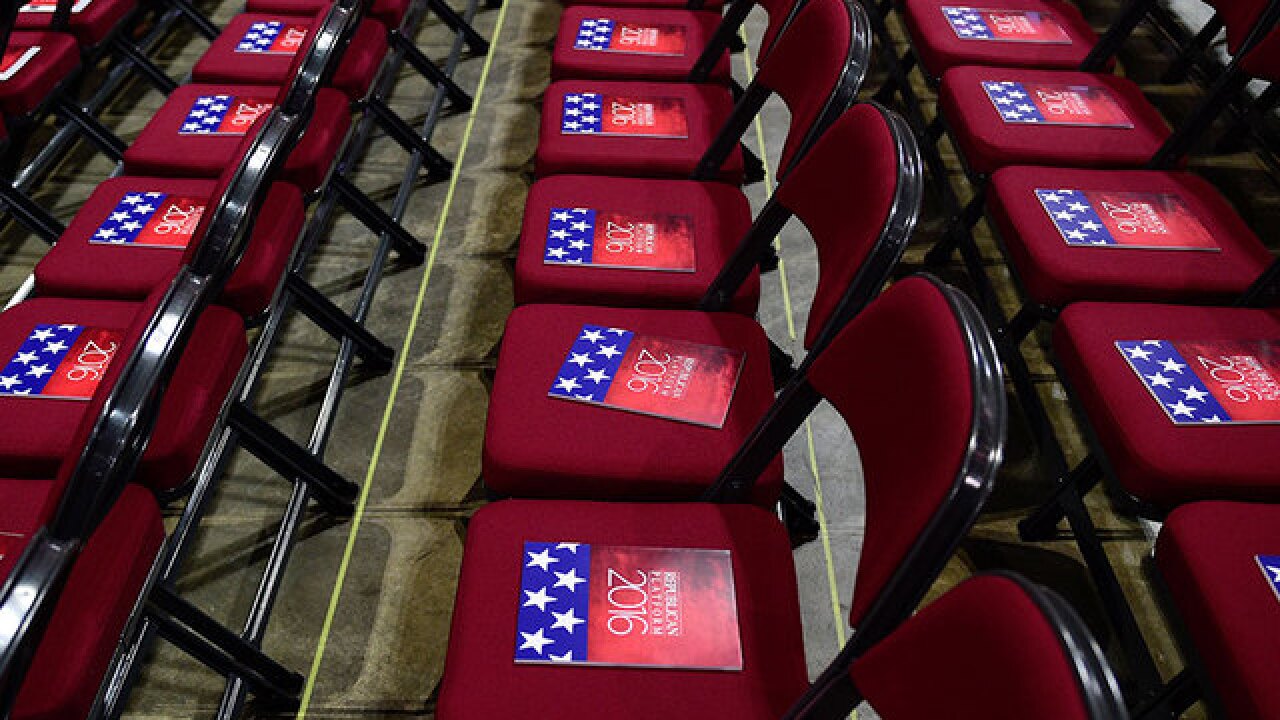 <p>The formal printed 2016 Republican platform sits on the chairs of the state delegates on the floor of the Republican National Convention the morning of the first day at the Quicken Loans Arena on July 18, 2016, in Cleveland, Ohio. The convention runs through July 21. (Photo by Jeff Swensen/Getty Images)</p>

In the conventional sense, the 2016 Republican National Convention is poised to be a disaster, to use a favorite word of the nominee, Donald Trump.

Exhibit A: The no-show list.  Past presidents, fallen primary opponents, top senators, party elders and rising stars are everywhere but Cleveland this week. Thus, the Trumpian event won’t even have “the greatest” celebrities. Whether it’s politics, show biz, sports or military brass, the A-list ain’t showing up.

Trump doesn’t seem troubled in the least. The day before the convention, I was chatting with a columnist who has covered as many conventions as anyone.  There was still no schedule of speakers, no keynote speaker, no well-trumpeted themes and no all-star orators.

“Trump doesn’t give a sh-t,” was this veteran’s conclusion.

Trump might, though, if the convention proves to be a preface for Election Day. In other words, is the No-Show convention an omen for a no-go Election Day where GOP voters don’t turnout at a normal rate?

Bob Stevenson was a top hand for Republican senators Warren Rudman, Pete Domenici and Bill Frist and a maven on New Hampshire politics.

But Stevenson doesn’t think the great Cleveland No-Show has much predictive value.

“I wouldn't equate turnout at any political convention with Election Day turnout, but even more so here,” he said. “Traditional Republicans will be sufficiently motivated by the specter of a Hillary Clinton presidency or a Democrat takeover of the Senate to show up on Election Day.”

The key to victory in November is winning in the core battleground states and big turnout from the parties’ faithful is only one factor. “The battle in those states, and what will determine the outcome nationally, will be over the independent vote,” Stevenson says.

“I am skipping it,” says Norm Ornstein, Washington’s presiding political scientist who is based at the conservative think tank, the American Enterprise Institute. “Neither my heart nor my digestive system could take it.”

But Ornstein doesn’t think his ailments are a symptom of a great Republican illness.

“The no-shows reflect more an elite view at this point and I'm not sure that the tribal instinct of most Republicans won't kick in and will get at least an average turn out for the party,” he says.

Trump clucks about the GOP in the primaries and promises to do even better in the general. It is certainly true that the 29.6 million Republican primary voters this year dwarfed the 2012 mark, 18.9 million.  Trump got 13.3 million votes; Mitt Romney took 9.9 million.

The bad news for Trump is that Hillary Clinton got 17.1 million primary votes this year from a total pool of 30.8 million.

Trump and Clinton may be the most unpopular general election candidates since telephone polling was invented, but they are not equals when it comes to party support.

Conventions don’t do much real business anymore and the vast bulk of voters pay them scant attention. But they do reflect the solidarities and divides in the parties.

Trump’s No-Show convention will be followed by Clinton’s Big Show convention where every star in the Democratic sky will appear. Republican voters who are on the fence about Trump, however, are watching their biggest stars scurrying away from the party nominee.

Conventions aren’t destiny, but they’re not chopped liver either.

This year’s GOP convention is breaking all the conventions. That’s the Trump style, in politics at least.

“I don't put it past Trump to create even more alienation and motivate even more heightened Democratic turnout,” Ornstein says.

That one seems like a safe prediction, for sure.