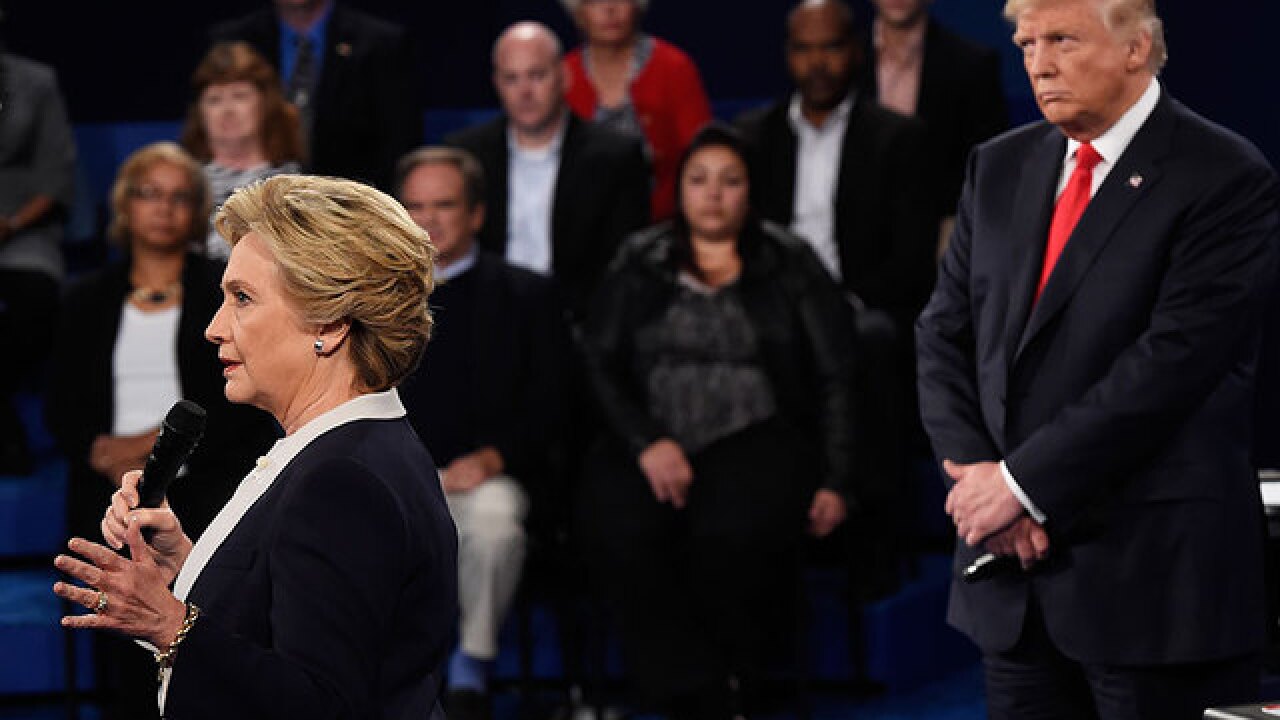 <p>Democratic presidential nominee former Secretary of State Hillary Clinton speaks as Republican presidential nominee Donald Trump listens during the town hall debate at Washington University on Oct. 9, 2016, in St Louis. This is the second of three presidential debates scheduled prior to the Nov. 8 election. (Photo by Saul Loeb-Pool/Getty Images)</p>

Historians remind us that gutter politics is nothing new in America, but never has a nominee from one of the major parties publicly raced to the sewers of politics as Donald Trump has in recent days.

Reeling from scandal and Republican mutiny caused by his own words in a crude, sexually abusive piece of video unearthed by The Washington Post, Trump set the table for the debate by trotting out for the cameras four of the Clintons' perennial accusers and their accusations that have gone unsubstantiated for decades. Steven Bannon, CEO of the Trump campaign and the former chairman of the right-wing tabloid Breitbart News, wore a green hunting jacket as he watched from the back, grinning.

This was the fitting preface for what has to be the lowest, most demoralizing of presidential debates. Fortunately or unfortunately, it was not a debate likely to change minds.

Hillary Clinton’s job in the debate was to follow an ancient rule of war and politics: Never interfere with the enemy in the process of destroying himself. She did an adequate, not masterful job under the most trying of circumstances.

Trump’s was first not to dissemble into a snarling bully and then to make the debate about Hillary Clinton. Voters will judge his success, but he was relentless and focused in his attacks.

If there was a moment that typified the night, I would nominate Trump saying of Clinton, “She has tremendous hate in her heart.”

Yet by constantly repeating that Clinton was all talk and no action, Trump probably cued some viewers to hear her informed and detailed answers as just political yada-yada. She was damned if she did, damned if she didn’t.

The audience questions were generic, but the moderators did try to get direct answers on the toughest issues.

“That is sexual assault. You bragged that you committed sexual assault,” moderator Anderson Cooper said to Trump, referring to the “Access Hollywood” tape.

“I didn’t say that at all. I don’t think you understood what was said. This was locker-room talk,” Trump responded. “Certainly I’m not proud of it. But this is locker room talk.”

“I’m very embarrassed by it. I hate it. It’s locker room talk,” Trump said later, before an instant pivot. “I will knock the hell out of ISIS.”

Clinton said she has had deep disagreements with past Republican nominees. “I never questioned their fitness to serve. Donald Trump is different,” she said. “What we all saw and heard on Friday was Donald talking about women, what he thinks about women, what he does to women, and he has said that the video doesn’t represent who he is…It represents exactly who he is.”

“It’s just awfully good that someone with the temperament of Donald Trump is not in charge of the law in our country,” Clinton said later.

“Because you’d be in jail,” Trump shot back.

And so it went. There was seemingly nothing Trump wouldn’t try. And Clinton was unable to pierce his bravado and throw him off his strange balance.

Democrats were surely hoping for a forensic nail in the coffin — the zinger, the shaming locution that would put Trump in the ground for good. It didn’t come because that is the stuff of Hollywood and scripted reality television.

Republicans hoped Trump would staunch some bleeding. He may have in some quarters of the GOP and his loyal base.

This debate was just one wave in the churned up ocean of the huge Trump scandal and the mass defection of Republicans from his ticket. It is the voters’ cruel fate that there is one more to go.