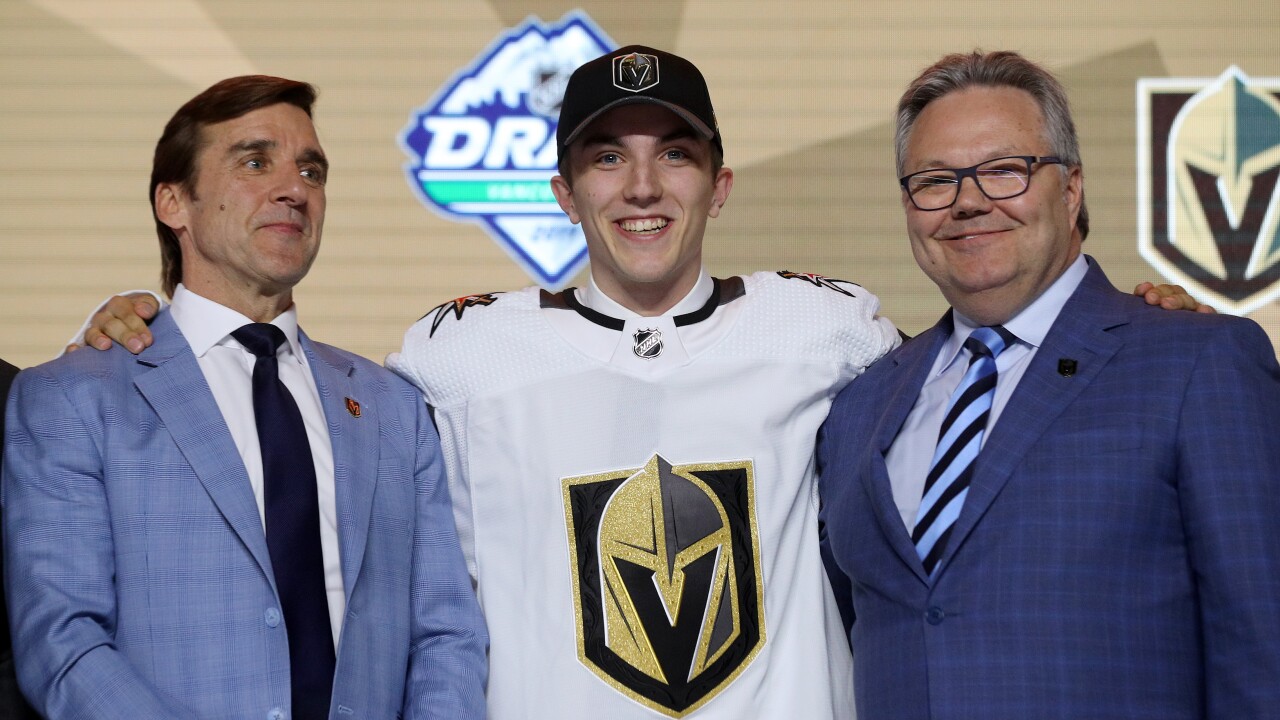 LAS VEGAS (KTNV) — Payton Krebs was selected seventeenth overall by the Vegas Golden Knights on June 21 during the first round of the 2019 NHL Draft.

Here's what Krebs had to say after joining the team.

VEGAS GOLDEN KNIGHTS FORWARD PEYTON KREBS IN HIS OWN WORDS:

Thoughts on what your emotions were when you heard your name…

It’s surreal. I was trying to hold in the tears. It’s a special moment for me and my family and I’m just really thankful to be able to be blessed by the game and I’m just very excited to get to know Vegas and all it has to offer, so I’m very excited.

Thoughts on your injury…

Unfortunately, I cut my Achilles the other week so I had surgery on that two weeks ago and I’m just healing up now so I can be ready for the season.

Yeah, Cody I played against him once this year. We actually chatted on faceoff there so it’s pretty cool. He’s a great person. My brother’s known him for a while now and I’ve gotten to know him so pretty special guy and I’m looking forward to getting to know him better.

Thoughts on what you can bring to the team…

I think I can be a 200-foot player who can add a lot of speed and hockey IQ to the Vegas Golden Knights and I want to bring home a cup.

I talked to them at the Combine but wasn’t really sure where I was going to end up. I just heard my name and I was so pumped and so excited. My uncle texted me right before and he said, “Vegas, baby!” right before so that was pretty cool. I’m so pumped right now. It’s pretty cool.

Thoughts on where your determined mindset originated from…

I think growing up with lots of brothers you always have to make sure you’re on your toes and fight for everything. I’ve had a great support system growing up and I just put in my mentality that I’ve got to work for everything. To get here is not easy and the draft is a little piece of the puzzle for sure, but I want to keep going hard. My family has been amazingly supportive of me and my coaching staff, I’ve had great coaches. I’m just blessed to be here.

Thoughts on your family and upbringing…

I grew up in Okotoks, Alberta just outside of Calgary. My dad brought me into hockey, and I fell in love with it. I think my passion grew as I got older and I’m so excited to be here and just keep going with my journey here.

Thoughts on how much you’ve watched Vegas…

It’s been a special three years and I hope to continue that, for sure. The atmosphere in Vegas starts with their fans. I’ve heard it’s unbelievable, so I’m looking forward to feeling that, experiencing that, and I wanted to go to a place that I could get the shivers every time I walked into the building. I think Vegas will do that. I’m pretty pumped.