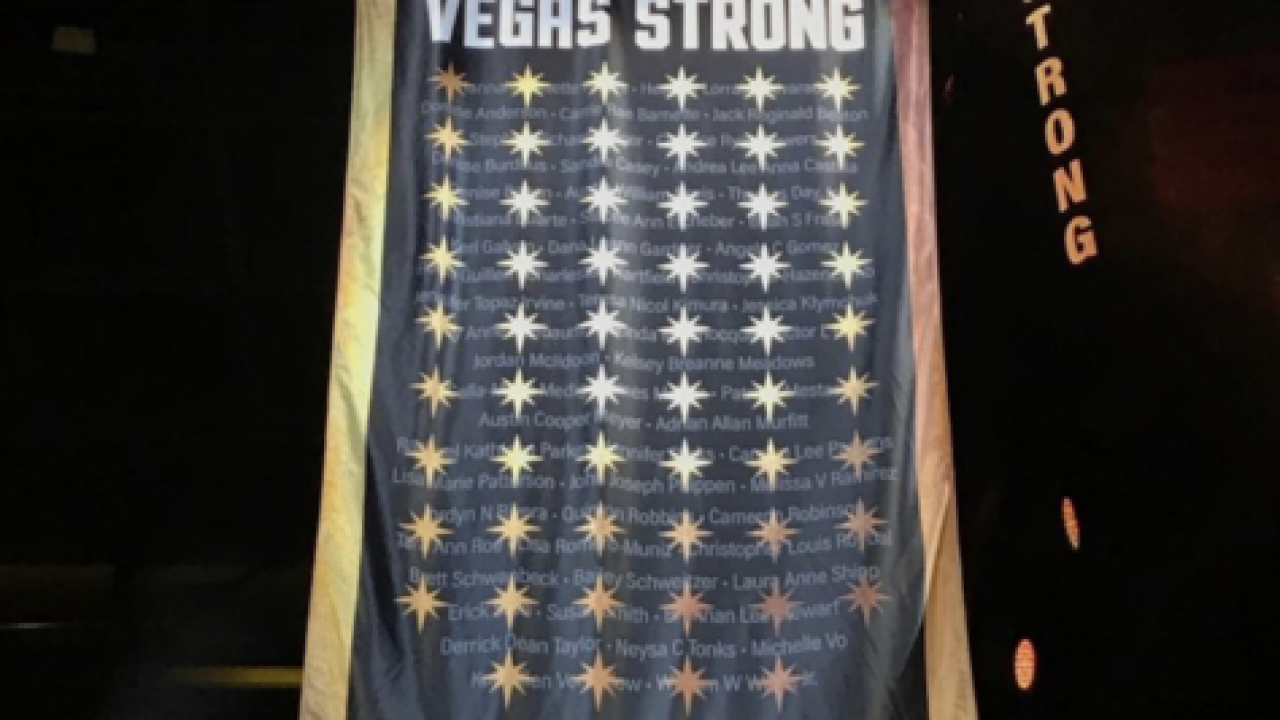 Copyright 2018 Scripps Media, Inc. All rights reserved. This material may not be published, broadcast, rewritten, or redistributed.
<p>PHOTO BY VEGAS GOLDEN KNIGHTS</p>

The Vegas Knights proved they were Vegas Strong once again during the last regular game of the season on Saturday night.

The team, which played its first game on Oct. 6 not long after the mass shooting that claimed 58 lives during a country music festival on the Las Vegas Strip, honored those victims before an appreciative crowd at T-Mobile Arena.

A black-and-gold banner honoring the 58 victims was unveiled during an emotional opening ceremony. The banner has 58 stars and the names of the 58 victims. The team also announced that it is retiring the number 58.

"Tonight we fly 58 stars in the sky as a reminder that the 58 will always be with us."

The 58 will always be with us #VegasStrong pic.twitter.com/FwT0HOH3uS

"The Las Vegas Golden Knights have decided, that the number 58 will never be worn," said the arena announcer.

Players from both teams stood on the ice during the ceremony, along with the family of shooting victim Neysa Tonks. VGK majority owner Bill Foley and George McPhee were also present.

The Knights went on to beat the San Jose Sharks in an exciting game in front of more than 18,400 hockey fans to lock up the Pacific Division title.

After the game, players presented their game jerseys to a group of fans.

There’s one sick goal in that jersey 👏 pic.twitter.com/ZmIwsH0JvV

That smile right there

That’s why we do what we do pic.twitter.com/LAU1f36RZw

Game-worn jerseys from the players

Like, immediately after the game ends kind of worn pic.twitter.com/H3CDU3l0Yu

The Vegas Golden Knights' consistent message of Vegas Strong from the very first game (where they also honored the victims of the mass shooting) and their involvement in the community have won the hearts of many Las Vegas residents. Many people who had never seen a game in real life are now packing the stands, attending the practice sessions, and buying VGK gear.

In an incredible gesture, the Vegas Golden Knights have retired the number 58 in honor of the lives lost during 1 October. #VegasBorn #VegasStrong pic.twitter.com/LoiwSBFXCt

Cried at the home opener and now at the home closer... The Vegas Golden Knights retire tonight the number 58 which will never be worn by a player to honor the 58 victims of October 1st. Way to go Golden Knights... We are Vegas Strong! pic.twitter.com/YXR9Wv41GG

HOW IT ALL BEGAN

There hasn’t been a voyage this fantastic since Coolio pic.twitter.com/A1dXS7RrN7