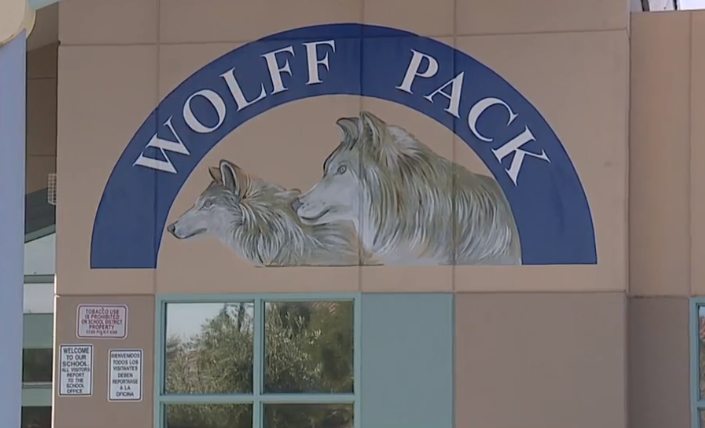 State funding for schools is a top issue facing Nevada lawmakers in Carson City, as this year kicked off with some Clark County School District schools forced to eliminate positions.

HENDERSON (KTNV) — State funding for schools is a top issue facing Nevada lawmakers in Carson City, as this year kicked off with some Clark County School District schools forced to eliminate positions.

However, a Henderson school turned that adversity into quick action for the principal and the PTA.

With spirit day hats and t-shirts visible on students in Mrs. Rowland's 5th-grade class, for a few bucks students can buy shirts or customized hats with proceeds benefiting the school.

For school Principal Linnea Westwood the beginning of the school year came with some unwelcome news as her student count was lower than expected.

Westwood was faced with possibly having to eliminate a 5th-grade teacher she had just hired.

However, after shifting some positions around, she had to get creative with her budget.

"I ended up taking all of the money out of our regular supply budget and moving it to pay for that teacher,” Principal Westwood said.

And that shift sent the school into fundraising mode for school supplies, and the PTA went into high gear.

Rachel Donn, PTA president with three of her four kids attending Wolff, led the program to community outreach fundraisers like restaurant night with local Henderson businesses such as Bell's Barbeque.

"I will have a child in this school continuously until 2027,” Donn said.

Principal Westwood herself found a creative way parents could also invest in the school, get a tax write off, and not have to deal with parking problems.

"For the first ten families that donate a thousand dollars. I will reserve a parking spot for you for the rest of the year,” Westwood said.

Sure enough, 11 families stepped up with parking spaces that were even decorated to their liking.

While fundraising in the past has led to items that enhance the school like library tables and chairs, Principal Westwood knows the responsibility to fund public schools should come from the state.

“We are hoping not to have to do so much of that fundraising in the future,” she said.

But with families willing to step up for the benefit of the kids gives “Wolff Pack pride” a whole new meaning.

Copyright 2019 Scripps Media, Inc. All rights reserved. This material may not be published, broadcast, rewritten, or redistributed.
What is Raising The Bar?