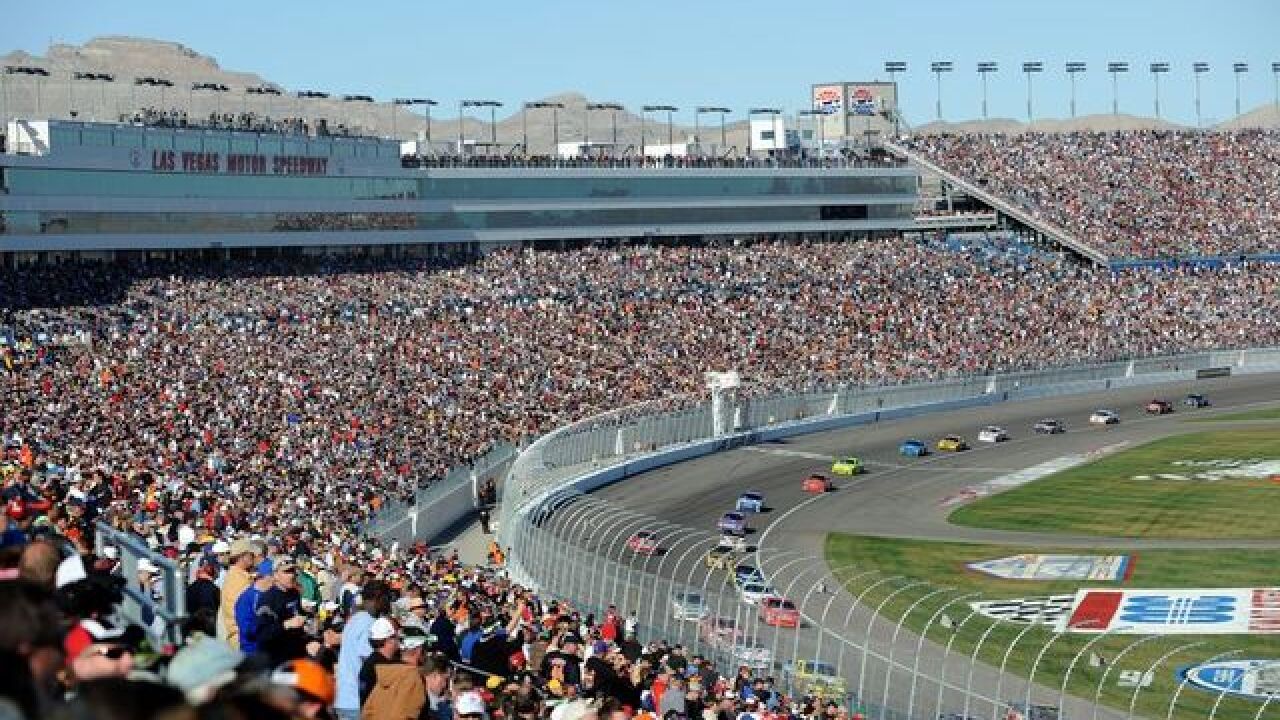 Here is a guide to some of the things to see and do and eat and drink during NASCAR Weekend 2018 in Las Vegas (March 2-4).

The Neon Garage at Las Vegas Motor Speedway offers unprecedented access to race teams and drivers, unique concessions areas, live entertainment and the Winner's Circle. Cost is $104 for a weekend pass or $64 for a single-day pass. Children ages 12 and under are admitted free with a ticketed adult.

The NASCAR Hauler Parade returns to the Las Vegas Strip on March 1. The parade will feature about 40 brightly-colored 18-wheeler trucks. It will begin at approximately 6 p.m. on the south end of the Strip and make its way to Sahara Boulevard before getting on Interstate 15 to go to Las Vegas Motor Speedway.

A 15-foot-tall replica of the world-famous "Welcome to Fabulous Las Vegas" sign will be a must-see attraction in the speedway’s fan-engagement area during this weekend’s NASCAR triple header. Fans will be able to take photos in front of the sign and are encouraged to share them on social media throughout the race weekend, and the display also will be equipped with a prize wheel for visitors to enjoy. The display will be a touring experience that will travel to other Speedway Motorsports Inc. facilities throughout the year to promote the city of Las Vegas as a travel destination. The replica – mounted on a 17’x18’ platform – was produced by CSM Events in Charlotte. The Las Vegas sign is one of an array of new fun and interactive features NASCAR fans can experience in LVMS’s fan-engagement area. The ever-changing interactive area is a favorite among race fans who visit the 1.5-mile speedway year after year.

Lyft Las Vegas will put fans in the driver's seat for an immersive NASCAR experience in the most advanced standalone virtual reality motion chair called the MMOne. The simulator features a 360-degree revolving chair synchronized with VR goggles and joystick, giving riders complete control of their virtual experience. Throughout NASCAR Weekend, riders can experience a 2-3 minute race around a simulated track of award-winning game "Trackmania" created by Ubisoft.

NASCAR driver Chase Elliott will deal blackjack and host a pit party at Hooters hotel-casino on March 3. The event will begin at 3:30 p.m. Elliott will serve as a blackjack dealer for the first 100 people to attend the Chase Pit Party. Elliott will deal blackjack against his fans, and the players with the winning hand(s) will move into the exclusive Pit Party, located on the Porch, hosted by Elliott. During the Pit Party on the Porch, winners will have the opportunity to do a special Q&A, play tailgating games and hangout with Elliott while he acts as a celebrity host. In addition, five lucky fans will each win two Pit Passes and tickets to attend the race on March 4.

NASCAR driver Brendan Gaughan will visit SLS Las Vegas with his SLS branded car from 11 a.m. to 3 p.m. March 3. Fans will be able to meet Gaughan and take photos. SLS will offer specialty cocktails made with Brendan's City Light Shine.

Championship race car driver Kurt Busch will be at the Gold Spike in Downtown Las Vegas from 5 to 5:30 p.m. March 3. He will be signing autographs and taking photos with fans of all ages.

Cabo Wabo is inviting guests to watch the kick-off parade of NASCAR weekend, the Hauler Parade, sitting strip-side on Cabo’s patio on March 1. The restaurant will also be selling Sammy’s favorite cocktail, the Can’t Drive 55, which is a blend of Cabo Wabo blanco tequila, Sammy’s beach bar rum, vodka, gin and splashes of lime, orange, pineapple and cranberry juices, finished with a touch of amaretto Disaronno, priced at $15, throughout all of NASCAR weekend. Beer bucks and shot specials will also be available throughout the weekend to guests watching the races on any one of Cabo’s dozen flat screen HDTVs or wall projectors.

Crazy Horse III is hosting NASCAR viewing parties and beer bucket specials from March 2 to 4. The award-winning gentlemen’s club will treat NASCAR fans to $20 beer buckets and the company of the venue’s gorgeous entertainers, while watching the draft on Crazy Horse III’s massive 70-inch and 100-inch high-definition televisions.

RACE JAM 2018 at the Fremont Street Experience in Downtown Las Vegas will feature a free concert by 38 Special. The band is known for its top hits including  “Hold On Loosely,” “Rockin’ Into the Night,” “Caught Up in You” and “Fantasy Girl.” Free admission, no tickets required.

Comedian Bill Engvall will perform during NASCAR Weekend at 9 p.m. March 2 at Treasure Island. With 30 years and nine comedy albums into his career, Engvall remains one of the top comedians in the country. His family-oriented stand-up show still connects with audiences of any age by finding humor in everyday situations. Recently, Engvall released a new comedy special “Just Sell Him for Parts.” He also competed alongside his family on “Celebrity Family Feud” and was eaten by a shark on cult favorite “Sharknado 3: Oh Hell No!” He also took on the role of a mysterious neighbor in the thriller “The Neighbor.” Currently, you can hear Engvall on his podcast “My Two Cents,” discussing everything from parenting to power tools. Tickets are available starting at $59.95, plus taxes and service charges, and can be purchased by calling 866-712-9308 or 702-894-7722.

Aliante hotel-casino is hosting the official after-party on March 3. The after-party will kick off with a Q&A session at 7:30 p.m. with NASCAR Driver Ryan Blaney and veteran FOX Sports Pit Reporter Jamie Little followed by a live performance at 8 p.m. by Black Jacket Symphony: AC/DC’s “Back In Black.” There will be giveaways and autographed prizes along with beer and drink specials. Attendees must be 21 years of age and older. A variety of specialty cocktail will be available for just $5 each in the race and sports bar and ETA Lounge. There will also several beer specials at all casino bars.

If you would like to submit information for this list, please send a press release to webmaster@ktnv.com.