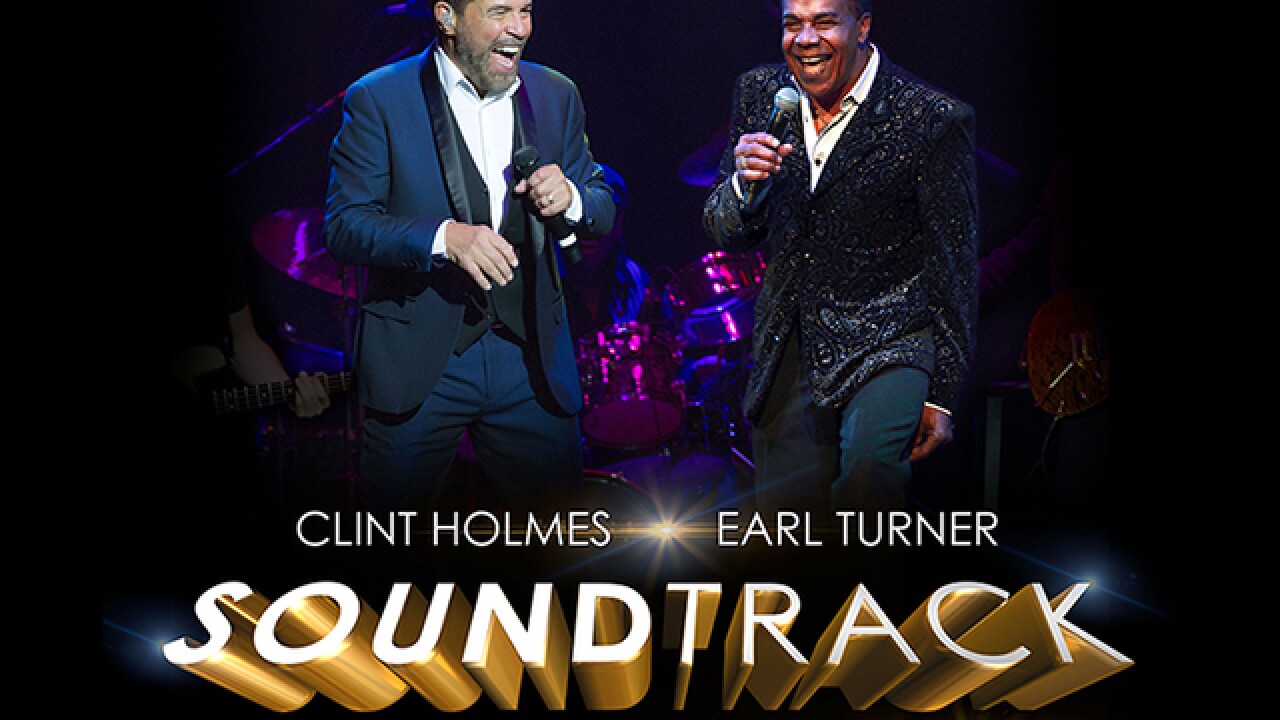 Copyright 2018 Scripps Media, Inc. All rights reserved. This material may not be published, broadcast, rewritten, or redistributed.
Westgate Las Vegas

Celebrated entertainers Clint Holmes and Earl Turner are taking the stage together to celebrate the ‘soundtrack’ of our lives in "SOUNDTRACK: Your Songs. Our Stories. The Show." The latest collaboration between these two Las Vegas legends will debut inside the famed Westgate International Theater at Westgate Las Vegas Resort & Casino Feb. 14 at 7 p.m.

"SOUNDTRACK: Your Songs. Our Stories. The Show." combines the talents of two of Las Vegas’s most beloved and highly-regarded entertainers, Clint Holmes and Earl Turner. Based on the music of our lives, past and present, Earl and Clint will combine their unique energy, voices, humor and life experiences to bring new life to the music that makes up the soundtracks of our lives. The audience will reminisce to songs that make us all ‘remember when’ and celebrate the music of some of today’s great contemporary artists.

These two entertainers have often shared each other’s stages as headliners and for more than two decades, lent their voices to each other’s award-winning shows. Now, having combined their talents on the same stage and in the same show, there will be no doubt in Las Vegas as to the city’s most entertaining and organic vocal experience. Featuring a live eight-piece band and the musical direction of Christian Tamburr, a three-time Down Beat Magazine Music Award winner, this musical performance will rock the historic International Westgate Theater.

Whether on the stage solo or complementing one another, these artists will bring back a feeling of “old Vegas” in a show that brings audiences the best of yesterday and today. Featuring hit songs from Michael Jackson, Al Green, Bruno Mars, Blake Shelton, Bill Withers and Irving Berlin, among others, the show will also highlight female vocalist Serena Henry, whose credits include performing with Gladys Knight and Smokey Robinson.

This high-energy performance will pay tribute to musical greats such as Stevie Wonder and Prince, as well as Las Vegas legends, Frank Sinatra and Sammy Davis Jr.

Clint Holmes is one of the country’s finest vocalists. A consummate entertainer, performer and recording artist, Holmes scored a number-one hit in 1972 with “Playground in My Mind.” He has established a long resume of accolades and accomplishments, including “Singer of the Year” in both Las Vegas and New York City. His latest album Rendezvous was nominated for two Grammy® Awards in 2018.

Earl Turner, a multi-talented singer, songwriter, musician, dancer and actor, saw the Las Vegas Review-Journal name him “Male Vocalist of the Year” and “Las Vegas’ Most Dynamic Performer.” A 30-year veteran of Las Vegas showrooms and countless casino theaters across the country, Turner was honored when Harrah’s New Orleans Hotel and Casino named a showroom for him during his multi-year engagement and he was inducted in the New Orleans Music Hall of Fame.

"SOUNDTRACK: Your Songs. Our Stories. The Show." will perform Thursday through Sunday at 7 p.m. inside the International Westgate Theater at Westgate Las Vegas Resort & Casino, beginning  Feb. 14. Tickets are $48, $58, $78 and $98 plus tax and fees and can be purchased at the Westgate Las Vegas Resort & Casino Box Office at (800) 222-5361 or online at www.westgatelasvegas.com.