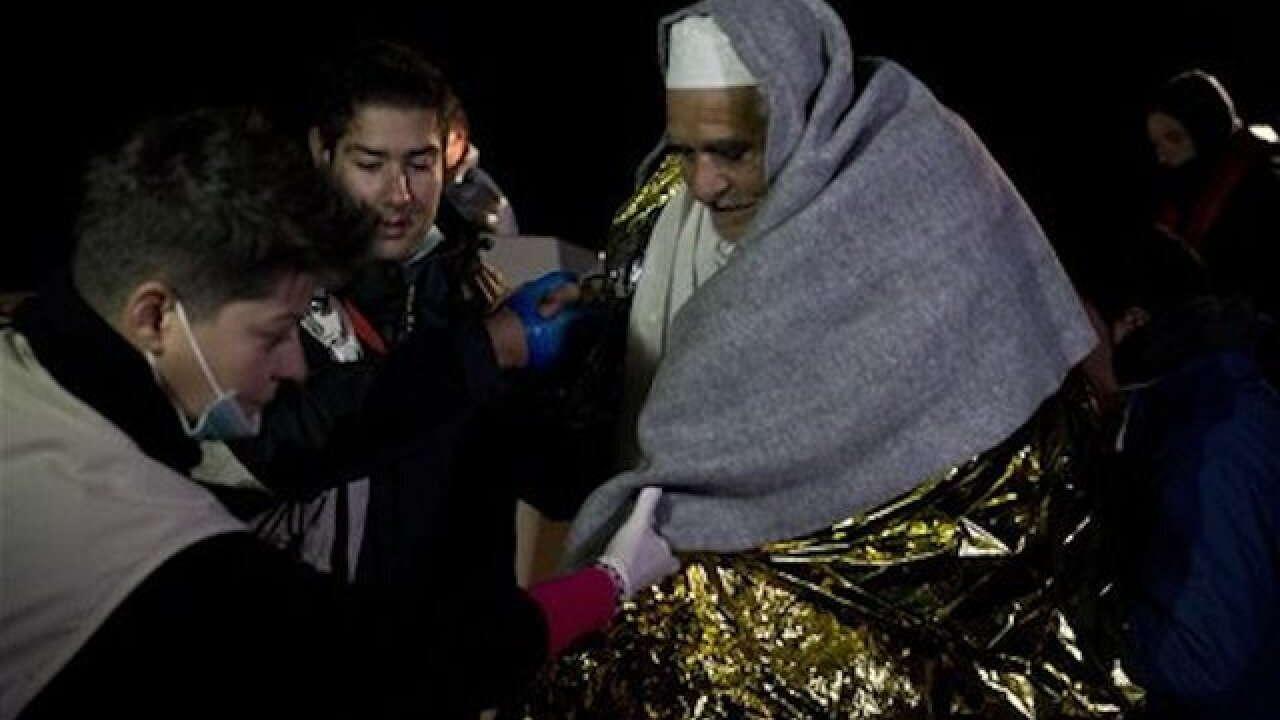 Copyright Associated Press
Petros Giannakouris
<p>A Syrian elderly man wrapped with a thermal blanket disembarks of a Greek coast guard vessel after he and other migrants were rescued near the shores of the Greek island of Lesbos, on Monday, March 21, 2016. The number of stranded migrants in Greece exceeded 50,000 Monday as the number of daily arrivals showed no sign of dropping. (AP Photo/Petros Giannakouris)</p>

ATHENS, Greece (AP) — Greece's prime minister warned Monday that an international agreement to limit the number of refugees traveling to Europe could not be properly implemented unless smugglers on the Turkish coast are stopped.

Turkey's president, meanwhile, slammed European countries for their criticism of his country's record on human rights and media freedoms and accused them of failing to protect the rights of refugees.

The refugee agreement went into effect Sunday, under which Greek authorities will detain newly-arrived refugees and send them back to Turkey and the European Union will settle more refugees directly from Turkey and speed up financial aid to help Turkey care for the 2.7 million Syrian refugees it is hosting.

On Monday, however, the two sides were still working out details of how the migrants will be sent back.

"We have to make an uphill effort because implementation of this agreement will not be an easy issue," Greek Prime Minister Alexis Tsipras said.

Tsipras met in Athens with EU Migration Commissioner Dimitris Avramopoulos and asked the EU to increase pressure on Turkey to crack down on smugglers.

Greek government figures released Monday said the number of stranded refugees in Greece now exceed 50,000 with no significant letdown in the number of daily arrivals.

"Unfortunately, yesterday, there was a high number of arrivals, some 1,500," Tsipras said. "If a reduction of (refugee) flows does not occur, we will not be able to evacuate the islands successfully so that the deal can start to be implemented fully."

Four migrants died Sunday while trying to reach Greece, two men off the island of Lesbos and two girls off the tiny islet of Ro, the coast guard said, as smugglers appeared to be opting for more overnight trips and increasingly dangerous routes.

Monitors from Turkey arrived Monday on the Greek islands of Lesbos and Chios to help supervise the agreement and were to stay for at least one week.

Greece's conservative opposition criticized the Turkish arrivals, a controversial topic as Greece and Turkey have ongoing boundary disputes in the Aegean Sea.

In Istanbul, President Recep Tayyip Erdogan said Turkey had agreed to the refugee deal with the EU to prevent Syrian refugees from being subjected to "derogatory treatment" as they piled up at closed European borders.

He also criticized Western countries for rejecting Turkish proposals for the creation of a no-fly zone or other secure zones in Syria, which he said would have prevented Europe's refugee crisis.

"All those who have not accepted a no-fly zone and a zone cleared of terror in Syria, and everyone who complains about the refugees are two-faced and hypocritical," the Turkish president said.

On the Greek mainland, army personnel expanded refugee shelters at sites in central and northern Greece — mostly at former army bases — so migrants who traveled to the Greek islands before the agreement came into effect could be resettled.

Ferries transporting them from the islands were using the port of Elefsina, west of Athens, instead of the main commercial port of Piraeus, to allow authorities to cope with the increased numbers of migrants.

This version corrects to show that Erdogan spoke in Istanbul, not Ankara.