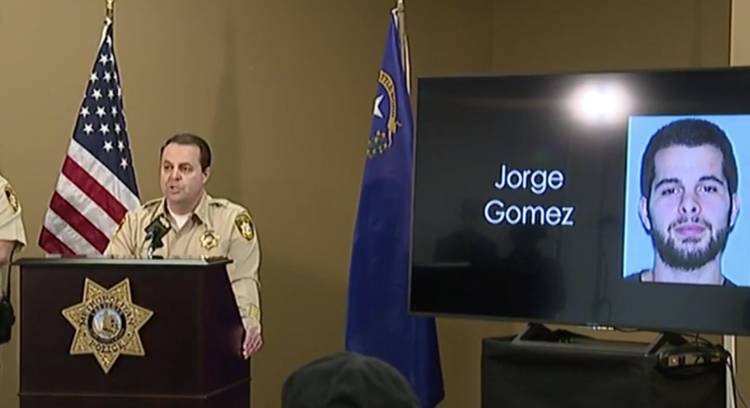 Las Vegas police held a briefing about a fatal shooting that happened during a protest in downtown.

Las Vegas police are briefing the media again about the shooting that happened during a protest in downtown Las Vegas.

Officers observed Jorge Gomez protesting on Fremont Street with a rifle slung over his shoulder and a holstered handgun on his hip.

Dispersal orders were given at that location and Gomez left the area and moved south. Meanwhile, a large crowd had also assembled in front of the Federal Courthouse located at 333 South Las Vegas Boulevard.

Officers assigned there were advised that some of the protesters in the crowd were carrying baseball bats. Dispersal orders were announced at this location and protesters were warned that remaining in the area would subject them to arrest.

Due to the size of the crowd, additional officers arrived on Las Vegas Boulevard and created a skirmish line to move the crowd south.

As the crowd was being moved, Gomez was observed walking on the sidewalk towards the steps of the Federal Courthouse and was behind the skirmish line.

Officers began approaching Gomez to conduct an arrest for failing to disperse.

An officer armed with a less-lethal shotgun saw Gomez armed with what he thought was a baseball bat, when in fact was a rifle and fired several bean bag rounds striking Gomez who began running.

As this was going on, Sergeant Ryan Fryman, and Officers Andrew Locher, Dan Emerton and Vernon Ferguson were driving by and got out of their vehicles. They observed Gomez raising the rifle towards the arrest team and discharged their firearms striking him multiple times.

Gomez was transported to UMC Trauma where he was pronounced deceased.

RELATED: Police on scene of 2 shootings during Monday night protests

All officers are assigned to the Professional Standards Division, Organizational Development Bureau. All officers have been placed on routine paid administrative leave pending the outcome of a review of this incident.

The officers were not wearing body cameras at the time because they are not normally required to do so. Police have obtained several videos that were posted on social media.