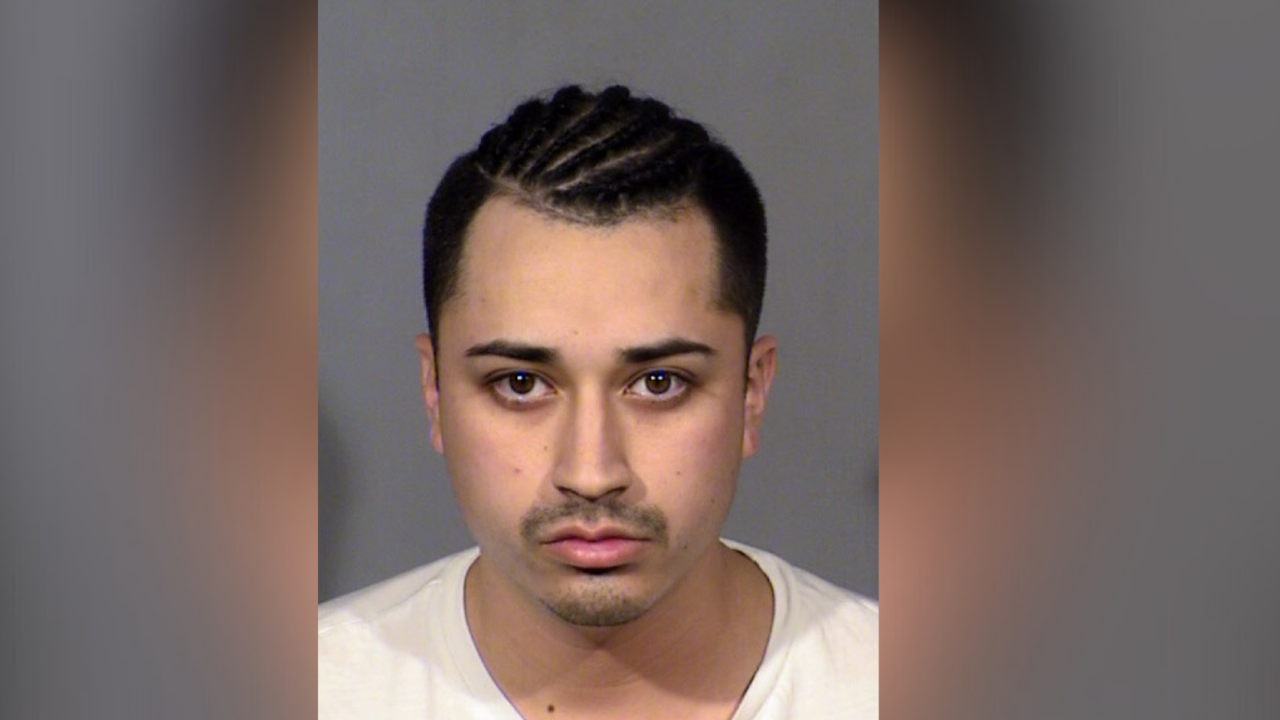 MARCH 16 UPDATE: Las Vegas Metropolitan Police Department have arrested a man in connection to the incident on Saturday night that involved a person in a "hazmat suit" spraying items with liquids.

Witnesses told police that the person in the suit sprayed several items, exposing multiple customers and employees. Due to the way the person was dressed and current coronavirus pandemic, several people became alarmed and notified police.

One of the witnesses told police that when she asked the man what he was doing, he motioned to her to open her hand. When she did, he sprayed her hand.

Witnesses gave police that the man got into a car driven by someone else and provided police with a license plate number, which they traced to Gonzalez.

Covert officers went to Gonzalez's home and set up surveillance. While waiting for a marked patrol car to respond, a man began walking towards one of the unmarked cars, holding his phone and appearing to film them.

When questioned by officers, the man became confrontational and did not want to answer any questions.

While taking Gonzalez into custody, they observed a juvenile male standing on the balcony of Gonzalez's home and recording them with his phone.

Officers contact Gonzalez's parents, who told them that the juvenile had asked for a spray bottle earlier, but didn't know why he wanted it.

The officers were able to recover video showing a male putting on a white painter's suit, gloves and goggles and then walking through the store, spraying various items while Gonzalez filmed him.

Police officers then interviewed the juvenile male who told police that he wanted to be famous on Instagram and YouTube by making funny videos. He told police that it was Gonzalez's idea to go to Walmart and spray items. He also said they decided to use a painter's suit because a hazmat suit was too serious.

Gonzalez reportedly bought painter's suit, goggles, a dust mask and latex-style gloves prior to the incident and then they went to Walmart.

Police were also able to locate a laptop and iPhone in the teenager's closet.

Because of the pair's actions, Gonzalez was arrested and is facing charges of dispersing a hoax substance and burglary. It is unknown what happened to the juvenile.

ORIGINAL STORY
A Las Vegas Walmart near the 215 and S. Rainbow Boulevard was evacuated early Sunday after police said a person wearing a full hazmat suit walked into the store and began spraying a clear liquid onto several items.

Police said 13 people came into contact with the liquid.

RELATED: Assistance to those affected by the coronavirus

None showed signs of any odd symptoms, and no one was taken to the hospital.

Police said the one person in the store followed the person into the parking lot a they left and recorded his license plate number allowing police to track them down and take the person into custody.

In a press conference, police used the opportunity to stress normal behavior at stores in light of the global COVID-19, also known as coronavirus disease 2019, pandemic and urged people not to hoard items.

"We know that there's a difficult time going on in the world right now," said Officer Ocampo Gomez, spokesperson for Las Vegas police, "but there is no reason for you guys to be going into the stores late at night and hoarding some of the supplies due to the fact that there are plenty of supplies left in the stores at this point."

It's not clear if the person will face charges, and police are working to identify the clear liquid.

Stay with 13 Action News for the latest with stories on the coronavirus.