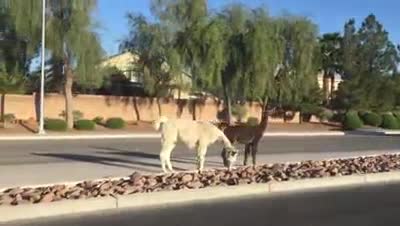 Hershey and Kisses' escape wasn't the first time animals running wild on city streets: a bull, a pig, horses and now llamas. As the city limits expand into rural areas and open spaces, animals and people are bumping into each other more and more. 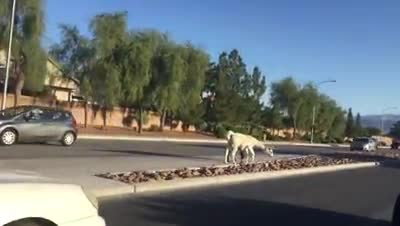 "I think we were shocked more than anything to see them because it's not something you see every day," said Nikia Dyson, who spotted the animals.

Animal control received a call about the llamas at 6:43 a.m.

The owner was eventually located, and the llamas were safely returned to their home on Boyd Lane. The owner said the llama's names were Hershey and Kisses. The owner was also issued a citation for animals interfering with pedestrians.

Video of the llamas was recorded by Dyson.

Check out these #llamas on the loose this morning near Jones Boulevard and Elkhorn. 13 Action News is looking for the owners. https://t.co/POOvgjrUqf pic.twitter.com/7mLGZe62xe

Former County Commissioner Tom Collins knows a thing or two about livestock as he had livestock escape when a bull got free from a fenced enclosure in his backyard a few years ago.

"Nobody got hurt. The animals got returned to their homes. The people are grateful, and there should be no fine or citation or violation," Collins said, when asked about Tuesday's situation.

Hershey and Kisses' escape wasn't the first time animals running were wild on city streets: a bull, a pig, horses have been a few others also seen around the valley.

As the city limits expand into rural areas and open spaces, animals, and people seem to bump into each other more and more.

Collins expects more scenes like these to happen with the neighborhood expansion.