Sheriff Lombardo showed new video from the night of the incident and repeatedly said that the officers acted appropriately in that situation.

Lombardo said video shown during the press conference showed that Bennett was acting suspicious and that it was not about race.

One of the videos shows Bennett yelling at officers that he wasn't doing anything while an office is heard saying, "sit down." Bennett continued to ask why he was being arrested.

While he was being detained, Bennett said his handcuffs were put on too tight before they were adjusted.

UPDATE 1 P.M. SEPT. 7: A Care2 petition is calling for the firing of the Las Vegas officers who held Seattle Seahawks star defensive Michael Bennett at gunpoint for as he put it, “being a Black man in the wrong place at the wrong time.”

The petition gathered over 2,000 signatures within three hours of launching.

Bennett said the incident was a “traumatic experience for me and my family” and that he is considering filing a civil rights lawsuit. The Las Vegas Metropolitan Police Department has launched their own investigation, but Care2 members say the officers should be swiftly fired.

“It is time for police leadership to send a clear message that it's not a crime to walk while black, and it is unacceptable for police officers to abuse people without cause,” writes Care2 petition author Aaron Viles. “No more paid vacations for outrageous police behavior. Fire the officers now and fix racist police practices.”

UPDATE 11 A.M. SEPT. 7: The Las Vegas Police Protective Association has formally asked the NFL to investigate Seattle Seahawks defensive end after his claims that he was racially profiled and assaulted by the Las Vegas Metropolitan Police Department.

The letter reads, "While the NFL may condone Bennett's disrespect for our American Flag, and everything it symbolizes, we hope that the League will not ignore Bennett's false accusations against our police officers."

Bennett has openly spoken on his refusal to stand for the National Anthem before games and cites situations like this for the reason the silent protest are needed.

On Wednesday, the NFL Player's Union stood behind Bennett. 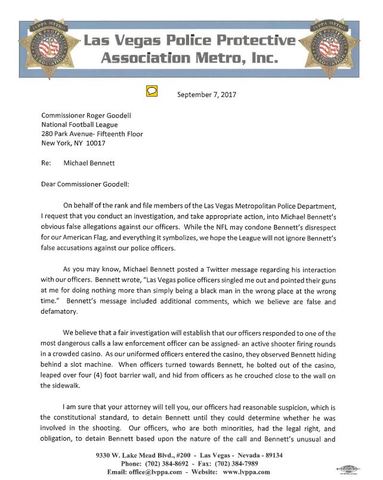 UPDATE AT 10 P.M. SEPT. 6:  The scene is chaotic. Police body-camera video shows officers scrambling through the casino at the Cromwell trying to find what they’re told is a shooter.

TMZ video shows NFL star Michael Bennett,  face down on the ground, yelling “I wasn’t doing nothing man! They told us to get out! Everybody ran!”

An officer standing over Bennett, ordering him to keep his hand together as slaps handcuffs on him.

The frantic moments happened outside Drai’s at the Cromwell, hours after the Mayweather/McGregor fight. Someone believed they heard gunshots. Customers ran a hid as police searched for a suspect. Bennett said he’s the victim of racial profiling.

“Sometimes you get profiled for the color of your skin,” said Bennett.

Bennett said he was heading back to his hotel. He said he began running just like everyone else, but police singled him out. “Do I think every police officer is bad?” Bennett asked. “No, I don’t believe that. “Do I believe there are some people out there  who judge people on the color of their skin? I do believe that.”

“I see no evidence that race played any role in this incident,” McMahill said. “He quickly ran out of the south doors, jumped over a wall onto flamingo road east of Las Vegas boulevard into traffic.”

"There's a lot of people who experienced what I experienced at that moment,” said Bennett, referring to recent cases in which African-American men died after behind stopped by police. “They're not here to live to tell their story."

LVMPD said they're reviewing more than scores of police body-camera videos. They’re asking public with cell-phone video to contact the police internal affairs unit, which is launching an investigation.

According to Undersheriff Kevin McMahill, calls were received about a possible active shooter inside The Cromwell at about 1:30 a.m. Aug. 27.

During their search for the shooter, a man was observed crouching behind a gaming machine.

As officers approached, the man stood up and began running. He exited The Cromwell and jumped a wall.

That is when Las Vegas police officers caught up with the man, who as later identified was Bennett, and placed him in handcuffs.

Police say that they detained him for about 10 minutes. After determining that he was not a threat, they released him.

Although body-cam footage from that night was shown, the arresting officer's body-cam was not activated.

The body-cam footage of another officer shows people rushing from The Cromwell as police officers enter. It then shows multiple police officers searching the casino for the reported shooter.

The undersheriff says that they are in the process of reviewing footage from 126 cameras and an investigation into the incident has been opened. He also pointed out that the officer that placed Bennett in handcuffs is Latino.

The undersheriff asked members of the public to contact their Internal Affairs division at 702-828-3111 if they have video that shows what happened that night.

The sheriff also asked that Bennett and his legal contact the police department.

UPDATE AT 2:45 P.M.: The Las Vegas police department will hold a press conference at 3:30 p.m. Wednesday to discuss the accusations by NFL player Michael Bennett.

UPDATE 11 A.M.: The Las Vegas Metropolitan Police Department tweeted a response to the claims of racial profiling and abuse made by NFL player Michael Bennett.

They are urging the public to reserve judgment until they are able to complete their investigation.

Reference a statement made by Michael Bennett, this case is under investigation. Reserve judgment. We will address this publicly today.

Bennett's lawyer spoke on his behalf and addressed their side of the situation.

ORIGINAL STORY: Seahawks defensive end Michael Bennett is known for his openness and willingness to tackle tough issues. That is why it comes as no surprise to see him publicly criticize the Las Vegas Metropolitan Police Department on social media for what he says was racial profiling during the Floyd Mayweather Jr. and Conor McGregor fight weekend.

He claims that on Aug. 26 he was headed back to his hotel after the Mayweather-McGregor fight at T-Mobile Arena in Las Vegas when several hundred people heard what sounded like gunshots. Bennett says that when he began to run like many others did around him,  police officers singled him out and pointed their guns at him for "being a black man in the wrong place at the wrong time."

The police ordered him to get to the ground and according to his letter they told him they were going to "blow his f***ing head off." He recounts an officer placing a knee in his back, restricting his breathing, and handcuffing him so tight that his fingers went numb.

Bennett says that is when his life flashed before his eyes and he thought he'd die on the floor for no reason other than being black.

After being handcuffed, Bennett was taken to a nearby cop car until police could identify him. At that point, they realized he was no threat and let him go. 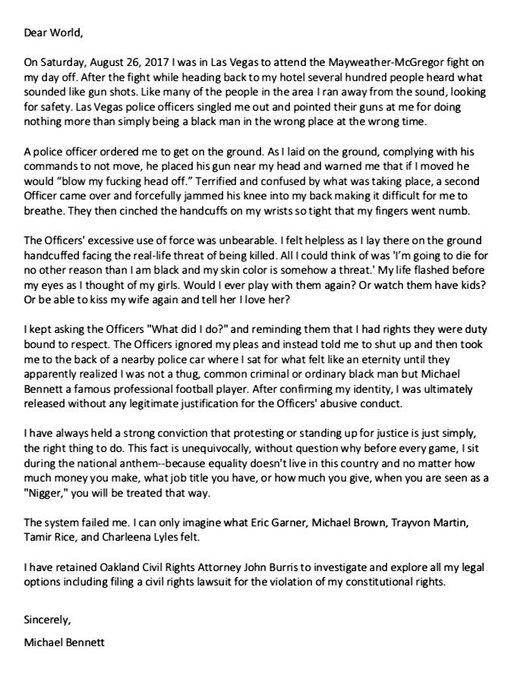 For Bennett, the feeling of relief was not enough to overcome the horrendous circumstances surrounding his detainment. He expresses later in his letter that these situations are exactly why he no longer stands for the national anthem before games and why he is so outspoken on racial inequality.

It is unclear whether Bennett will pursue legal action against the LVMPD.

A former Las Vegas police officer is currently facing charges for the death of a black man named Tashii Farmer on the Las Vegas Strip.

Kenneth Lopera put Farmer in a chokehold after a confrontation outside The Venetian hotel-casino. He has been charged with involuntary manslaughter and oppression under the color of office. Farmer's family has filed a wrongful death lawsuit against Lopera and the Las Vegas Metropolitan Police Department.

A recent documentary titled "What Happened in Vegas: The movie police couldn't erase" has also been making the rounds on social media. The documentary was made after the filmmaker witnessed Las Vegas police allegedly abusing a stranger in custody. After the filmmaker called 911 to report police brutality, he was reportedly attacked by police. The documentary investigates what is described as a terrifying pattern of police brutality in the Las Vegas police department.

We've reached out to the LVMPD in regards to Bennett's claims and we are awaiting a response.