Parents in a Summerlin neighborhood are sharing concerns about re-zoning proposals that could send their kids to different middle schools. CCSD says it’s about addressing overcrowding, but these parents say that’s not case. Jeremy Chen reports. 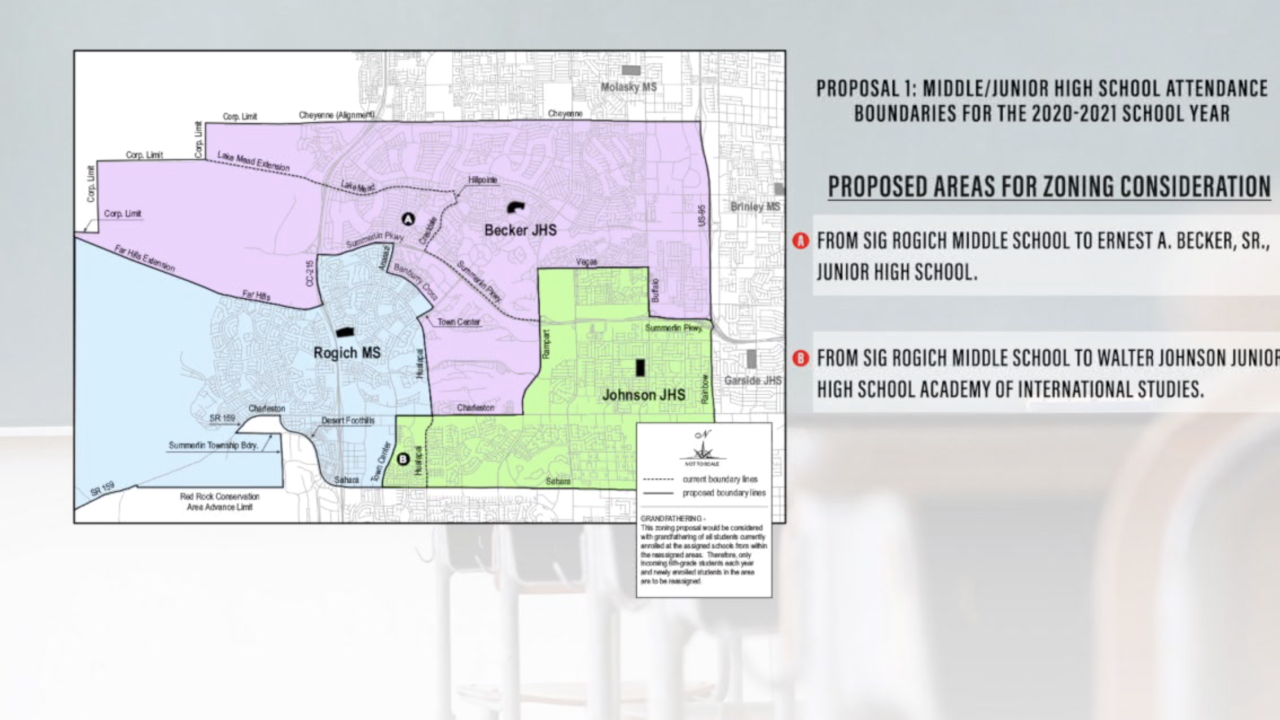 LAS VEGAS (KTNV) — Parents in a Summerlin neighborhood are sharing concerns about re-zoning proposals that could send their kids to different middle schools. Clark County School District says it’s about addressing overcrowding, but these parents say that’s not the case.

“When you rezone, it’s change, and people have made decisions to live in particular areas because of the schools,” Natalie Cornejo, a concerned parent, said.

She is part of a group of parents concerned about potential rezoning. Their Summerlin neighborhood is currently zoned for Sig Rogich Middle School.

Cornejo’s main issue is the alignment with the high schools for her fourth-grade daughter. Many students at Johnson will go to Bonanza High School whereas students at Rogich are mostly zoned for Palo Verde High School.

“There are only 20 kids in our neighborhood zoned to go to [Palo Verde High School]. So, she would go back to Palo and not know anybody and at 14, to be in that position, just doesn’t make sense,” Cornejo said.

Other concerns she and others have is geography. Johnson is three miles farther than Sig Rogich. CCSD in a statement given to parents says: “The objectives of these proposals are to provide enrollment relief in a high residential growth area, as well as utilize available capacity at surrounding schools.”

These parents say the proposals don’t solve the issue of overcrowding, however. According to CCSD documents, Rogich is at about 120% enrollment capacity, while Johnson is at about 110 percent.

“So essentially you’re punishing our 80 kids from this neighborhood and you’re sending them to another overcrowded situation,” Cornejo said.

The parents say they understand the district is trying to address the issue the best they can, but say this isn’t the solution for their neighborhood. They would prefer having their children remain zoned for Rogich.

“At this point you’re changing something with no benefit to the kids. In the end you’re impacting them socially, educationally, and there’s a real cost to doing what they’re doing,” Victor Cornejo, a concerned parent, said.

Parents will be able to voice their thoughts and input at a meeting Monday night at the Sig Rogich Middle School gym starting at 6 p.m. Comments may also be emailed to AZAC@nv.ccsd.net.