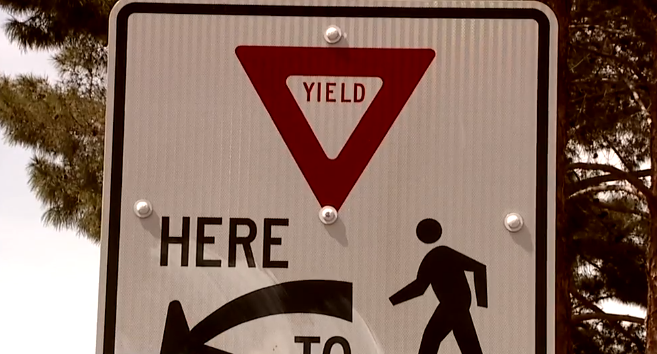 A crosswalk has been installed near Boulder Highway and Tropicana Avenue. However, many locals told 13 Action News that it has not helped them feel any safer while on the street.

LAS VEGAS (KTNV) — Residents living near Boulder Highway said they are fearful of crossing the street.

A crosswalk has been installed near Boulder Highway and Tropicana Avenue. However, many locals told 13 Action News that it has not helped them feel any safer while on the street.

"The drivers just need to slow down, but they are not slowing," nearby resident Sherry Thomas said.

The speed limit on Tropicana is 45 miles per hour. But, right outside Whitney Library there's a crosswalk, and just before that, there are flashing lights - warning drivers to slow down – but Thomas says she rarely sees drivers do that.

"That crosswalk is there for a reason. People have to cross the street," she said.

In the four years, she's lived on Sacks Street, Thomas says she's seen many pedestrians, including families with children, almost get hit – as it's a crosswalk she doesn't feel safe using.

"I like to walk down to the Dollar Store, but I'm afraid. I'm worried they won't see something, she said.

Edward Thomas, who's lived in the area for a decade, says the flashing lights should give drivers enough time to slow down.

"When you've got the lights, you shouldn't have to worry. As soon as you step off that curb there and it's marked off and everything, everyone should be putting on their brakes," Thomas said.

"If you're a pedestrian and you step into a street be sure to pay a thousand percent - keep your head on a swivel, watch everyone - because you're the one that will pay the price of a mistake someone makes," Breen said.