More college graduates are moving back in with their parents because it is too expensive for them to live on their own. Nina Porcciuncula reporting.

Young college graduates are more likely to be living with their parents than they were before the housing bubble, especially in places that had a more exaggerated boom and subsequent crash.

A new Zillow analysis of Census data finds the share of college graduates in their 20s increased the most between 2005 and 2016 in Las Vegas and Riverside, Calif. Nationally, 28 percent of recent college graduates live with their parents, up from 19 percent in 2005.

Near the end of 2004, homes were gaining nearly 50 percent in value each year. When the market collapsed, home values plunged by 62 percent, more than any other major U.S. market. 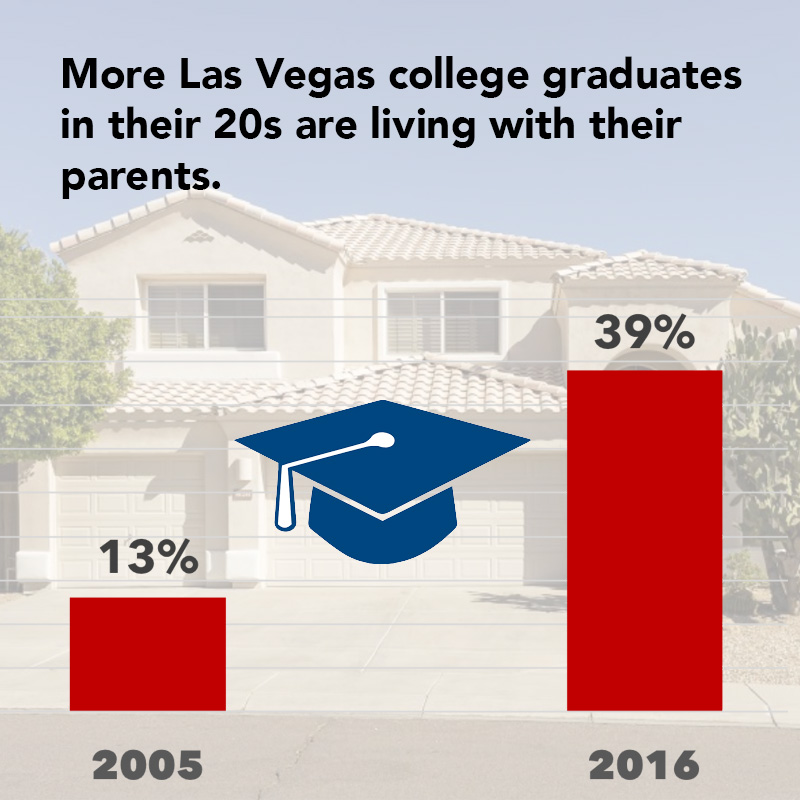 RELATED: Price of buying, renting in Las Vegas going up

In Las Vegas, 13 percent of graduates lived with their parents in 2005 while that number spiked to 39 percent in 2016.

"Being in college gives you that hope that one day you will get a job that can kind of compensate for all of those years that you had to struggle in college," says UNLV senior Madison Lewis.

But a college degree does not guarantee a high-paying job. Worse, wages aren't increasing and college remains expensive. Recent college graduates face the challenge of a higher cost of living and the burden of student loans.

As more young graduates live with parents, the share living with a romantic partner was on the decline. In every large metropolitan area, a smaller share of college graduates in their twenties live with a partner than did in 2005. Las Vegas had the biggest decline in the share of recent graduates living as a couple, falling from 47 percent to 29 percent.