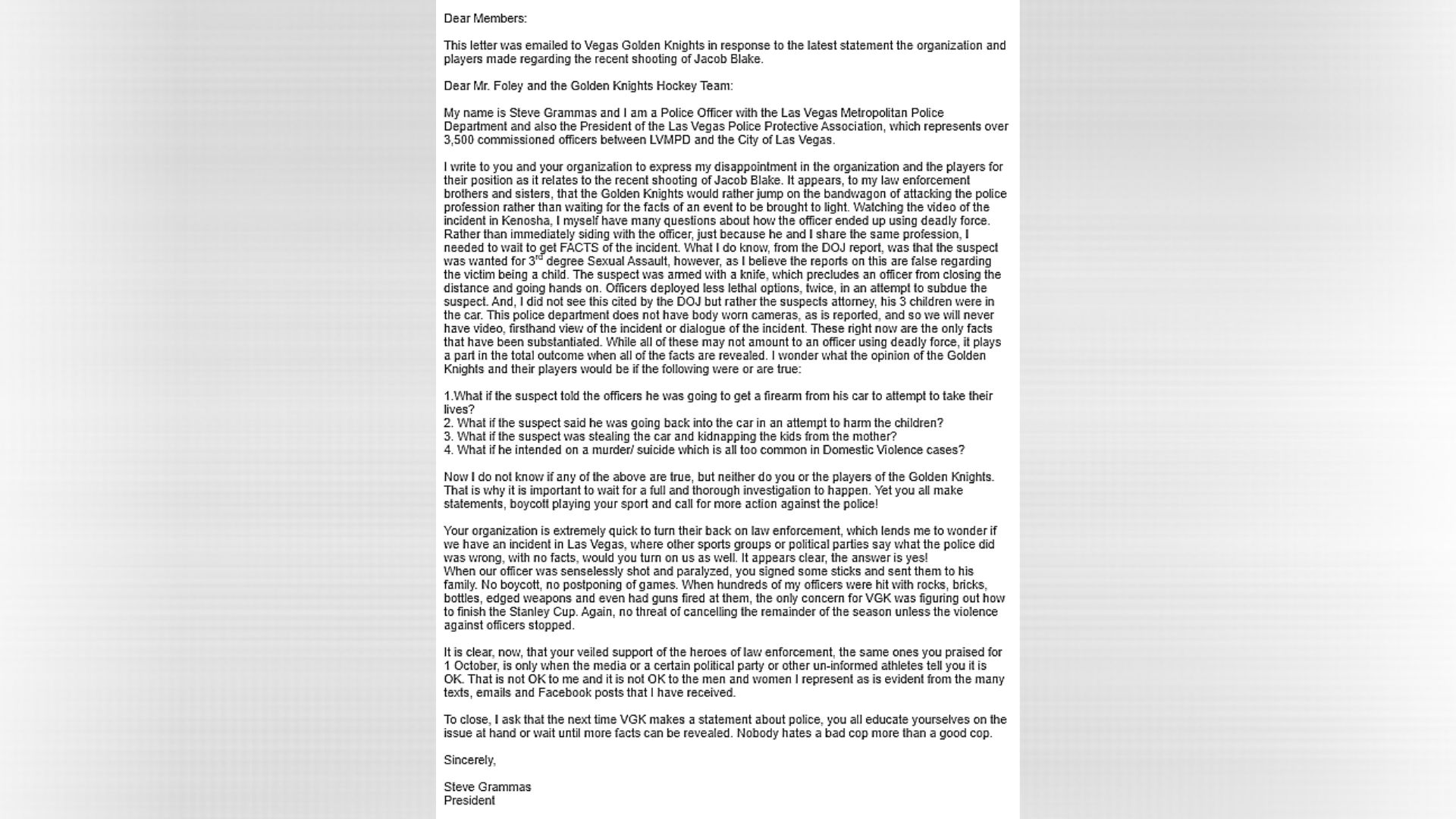 NEWS: The Las Vegas Police Protective Association sent a letter to the Golden Knights regarding their support of Jacob Blake, a Black man shot by police in Wisconsin. 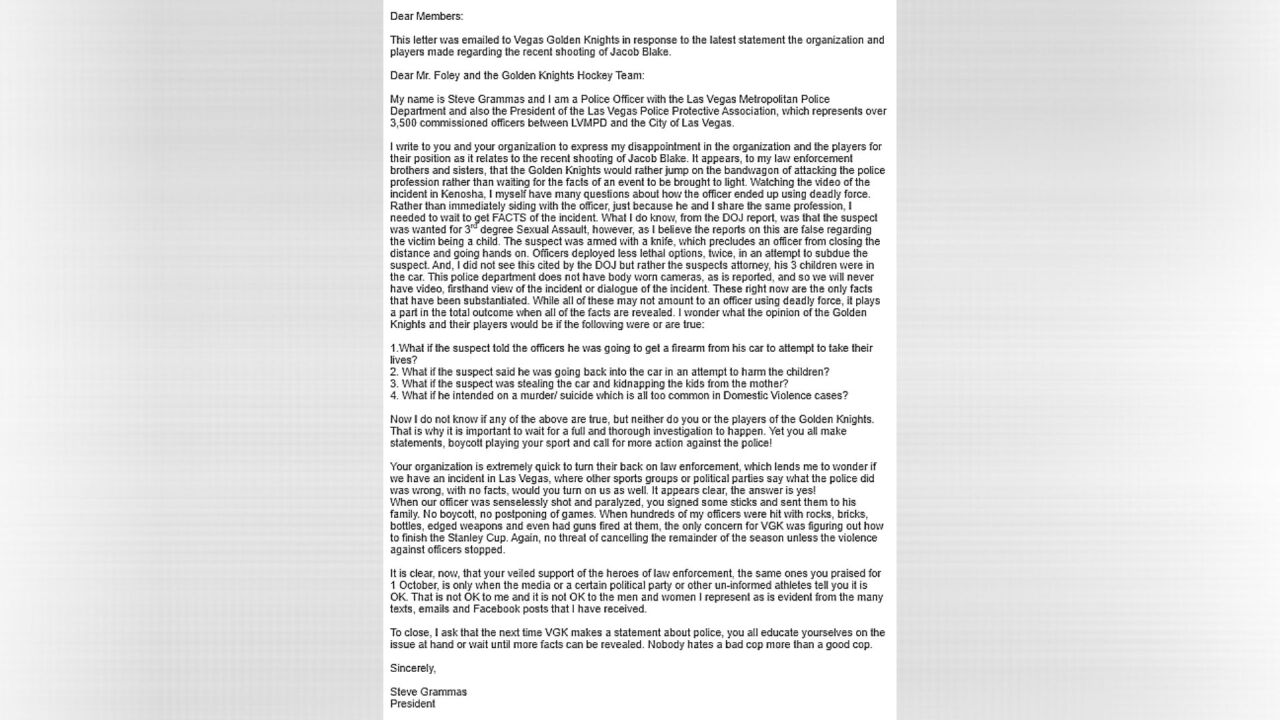 AUG. 29 UPDATE: The Vegas Golden Knights sent the following statement in response to the letter from the Las Vegas Police Protective Association to 13 Action News on Saturday afternoon.

"We are aware of the recent open letter to our organization from the Las Vegas Police Protective Association. We had a productive conversation with the Association on Saturday and look forward to continued dialogue."

LVPPA President Steve Grammas confirmed that he spoke with Vegas Golden Knights' owner Bill Foley on Saturday. This is the email that he sent:

We want to first thank everyone for their support for the letter that was sent to the Golden Knights. We have had a huge amount of folks reach out in support of what the PPA said and those people, both commissioned officers, civilian employees and regular civilians, have expressed their views and opinions on the issue.

Upon sending the email to the Knights, I was immediately contacted by Bill Foley.

Today, Bill Foley and I had a very good phone conversation about the issues raised in the letter as well as some dialogue on how we move forward. Bill made clear his absolute appreciation for Law Enforcement and could not be more proud and appreciative of the men and women in Las Vegas. We committed to continue the dialogue with himself, the players and ourselves to make sure we can always communicate in a positive manner when issues arise.

We will continue to advise our membership on the progress we make between ourselves and the Golden Knights and potentially involve officers in round table discussions between LEO and the Knights organization.

ORIGINAL STORY
LAS VEGAS (KTNV) -- The Las Vegas Police Protective Association, a powerful union representing thousands of officers in Southern Nevada, sent a scathing letter to the Golden Knights in response to the team's messaging over the police shooting of Jacob Blake in Kenosha, Wis.

LVPPA President Steve Grammas penned the letter saying the Golden Knights' players and administration should have waited for more information to be revealed in the case before taking a stand.

"It appears, to my law enforcement brothers and sisters," Grammas wrote, "that the Golden Knights would rather jump on the bandwagon of attacking the police profession rather than waiting for the facts of an event to be brought to light. (Image below, full letter can be seen at bottom of this article)

Grammas cited reports that Blake possessed a knife at the time of the shooting, had an outstanding warrant, and police attempted the use of less-than-lethal force to detain Blake before the shooting.

In the letter, Grammas called the Golden Knights' prior showings of support for Las Vegas police officers "thinly veiled," including support provided to Officer Shay Mikalonis and his family.

Mikalonis was shot during violent protests on the Las Vegas Strip and is recovering in a California hospital.

In a Tweet, the Knights said they agreed to postpone a couple of playoff games to shine a light on continued systemic problems and attempt to resolve racial injustices and inequalities in the United States.

Statement from the Vegas Golden Knights and our players pic.twitter.com/WVvhtnS8Q1

The Knights have not responded directly to the LVPPA letter.

They take to the ice Saturday evening to play the first of two postponed playoff games.

Here is the full letter sent to the Vegas Golden Knights:

My name is Steve Grammas and I am a Police Officer with the Las Vegas Metropolitan Police Department and also the President of the Las Vegas Police Protective Association, which represents over 3,500 commissioned officers between LVMPD and the City of Las Vegas.

I write to you and your organization to express my disappointment in the organization and the players for their position as it relates to the recent shooting of Jacob Blake. It appears, to my law enforcement brothers and sisters, that the Golden Knights would rather jump on the bandwagon of attacking the police profession rather than waiting for the facts of an event to be brought to light. Watching the video of the incident in Kenosha, I myself have many questions about how the officer ended up using deadly force. Rather than immediately siding with the officer, just because he and I share the same profession, I needed to wait to get FACTS of the incident. What I do know, from the DOJ report, was that the suspect was wanted for 3rd degree Sexual Assault, however, as I believe the reports on this are false regarding the victim being a child. The suspect was armed with a knife, which precludes an officer from closing the distance and going hands on. Officers deployed less lethal options, twice, in an attempt to subdue the suspect. And, I did not see this cited by the DOJ but rather the suspects attorney, his 3 children were in the car. This police department does not have body worn cameras, as is reported, and so we will never have video, firsthand view of the incident or dialogue of the incident. These right now are the only facts that have been substantiated. While all of these may not amount to an officer using deadly force, it plays a part in the total outcome when all of the facts are revealed. I wonder what the opinion of the Golden Knights and their players would be if the following were or are true:

Now I do not know if any of the above are true, but neither do you or the players of the Golden Knights. That is why it is important to wait for a full and thorough investigation to happen. Yet you all make statements, boycott playing your sport and call for more action against the police!

Your organization is extremely quick to turn their back on law enforcement, which lends me to wonder if we have an incident in Las Vegas, where other sports groups or political parties say what the police did was wrong, with no facts, would you turn on us as well. It appears clear, the answer is yes!
When our officer was senselessly shot and paralyzed, you signed some sticks and sent them to his family. No boycott, no postponing of games. When hundreds of my officers were hit with rocks, bricks, bottles, edged weapons and even had guns fired at them, the only concern for VGK was figuring out how to finish the Stanley Cup. Again, no threat of cancelling the remainder of the season unless the violence against officers stopped.

It is clear, now, that your veiled support of the heroes of law enforcement, the same ones you praised for 1 October, is only when the media or a certain political party or other un-informed athletes tell you it is OK. That is not OK to me and it is not OK to the men and women I represent as is evident from the many texts, emails and Facebook posts that I have received.

To close, I ask that the next time VGK makes a statement about police, you all educate yourselves on the issue at hand or wait until more facts can be revealed. Nobody hates a bad cop more than a good cop.