More than 800 customers were affected, including businesses.

This is a roundup of all the breaking news from around the Las Vegas valley for July 18, 2018.

A rollover on northbound U.S. 95 near Charleston Boulevard has caused the closure of all lanes in that direction.

The extent of injuries are unknown at this time.

UPDATE: Power has been restored to the affected areas.

BREAKING: power has been restored near 215/Eastern.
EARLIER: pic.twitter.com/RD4jYskSzM

ORIGINAL: 816 customers are currently affected by a power outage on Eastern Avenue between the I-215 and St. Rose Parkway.

It appears all the signal lights are out on Eastern between St. Rose Parkway and at least 215. You may want to avoid the area for lunch. @KTNV @RTCSNV pic.twitter.com/YuMI0B05MP

The NVEnergy website says that the outage is due to damaged equipment and power is expected to be restored around 3 p.m. 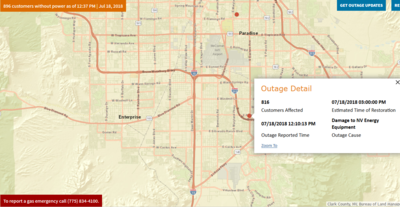 Traffic signals are down on Easter Avenue, so try to find an alternate route.

A fatal crash has been reported on U.S. 93 (also known as Great Basin Highway) near Mile Marker 63, which is about 15 miles north of Interstate 15. Nevada Highway Patrol says 2 people were killed and 1 person injured in the multi-vehicle crash. Traffic is being rerouted onto State Route 168.

Two people were taken into custody after a pursuit started outside of Las Vegas. Police said a pursuit of a vehicle finally ended near Tropicana Avenue and Rainbow Boulevard. Multiple agencies were involved, including Las Vegas police, Nevada Highway Patrol and Nye County Sheriff's Office.