It’s the last night of the Pony Club leg of her tour, and Stormy Daniels is holding court on main stage as women shower her with money.

Some of them are other dancers, hoping to cash in on Daniels’ draw – she is, after all, the first-ever Penthouse Pet of the Century (oh, and the center of a political firestorm over a $130,000 hush payment for an alleged 2006 affair with President Donald Trump). But many aren’t. For every lingerie-clad dancer waiting for her turn on the stage, there’s a woman in a Target blouse and capris equally eager to give Daniels a hug, tell her how much she means to her, and to slip a handful of ones into her thong.

It’s all the guys in the crowd can do to hold their spot near the front as they wait for their turn as the target of Daniels’ attention, and the more traditional strip club fare it brings.

“Look at these people coming in!” he says, pointing to three women and two men, plainly first-timers, gingerly making their way toward the second-level VIP seats ($60 a piece tonight). “When’s the last time they were in a strip club?”

Daniels’ show is clearly geared toward the club-casuals. There’s no flashy pole work, and the soundtrack is straight out of a greatest hits catalog: “Cat Scratch Fever” by Ted Nugent (she entered to this, wearing a leopard-print catsuit – complete with cat ears and tail); Guns N’ Roses’ “Welcome to the Jungle;” and, in case you forgot where you were, “Closer” by Nine Inch Nails. 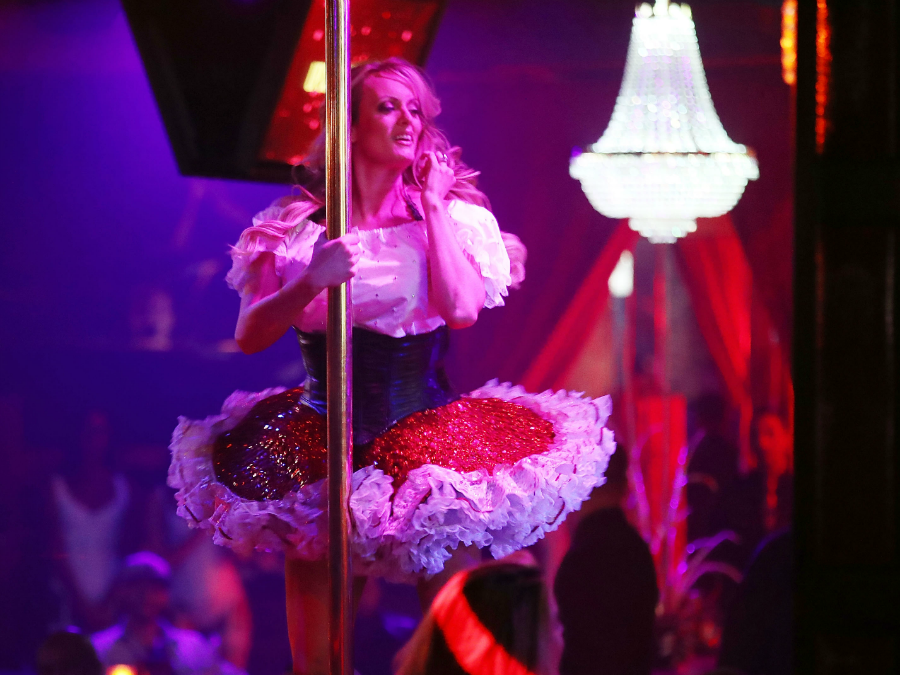 Her first set caps off with “Africa,” by Toto, which proves to be a crowd pleaser.

Adding to the scene: In the back of the stage is a cardboard cutout of President Trump, a toothy grin fixed to his face as he watches the night’s proceedings.

In the cheap seats – normally $6 on a weeknight, but $20 tonight – Crystal Beth and Ladonna Jones (they were inordinately proud of their fake names) are on their feet, clapping and mouthing the words. For tonight’s excursion, they’ve brought three guys with them who’ve never been to a strip club.

“I feel a kinship with her,” Beth says. “I admire the fact that she had the courage to come forward. We wanted to support her.”

Then she asks me what I think about the busts of the women working tonight.

The Night Before Stormy Rolls In

“The thing about Stormy Daniels is that she is a sex worker… she is a person who cares about her community, which is this country,” Karma tells me. “She knew she was going to face so much scrutiny and she still came forward and did the right thing. She’s what I wish people saw sex workers as.”

While Stormy Daniels – her appearance just 24 hours away – dominates the evening’s conversation, the vibe is decidedly different. Seats with customers in them are fewer and farther between – and the only women present are there to work. The giant pink pony is still out front, though. 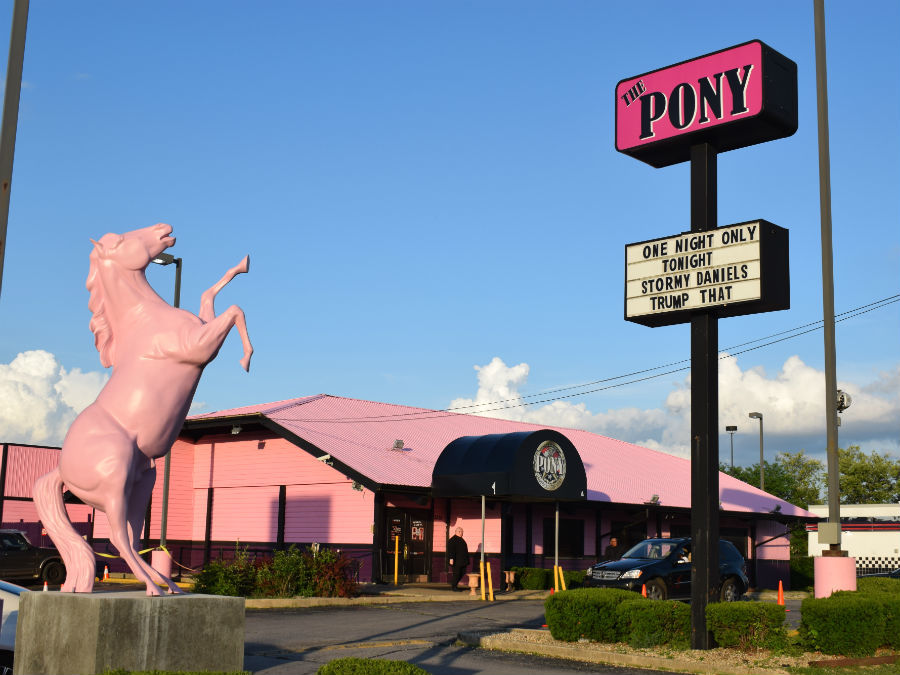 Karma (a stage name) says she got her start as a dancer at the Pony Club seven years ago. It was Rick’s Cabaret then. Westlund, who owns a chain of Pony Club locations around the country, changed the name three years ago when he bought it from a friend. He dubbed the girls who dance at the club “Ponies.”

Karma is going for a classic stripper look tonight: black lingerie, a crystal choker, and bright, shiny, red high heels – like Dorothy might have worn if, instead of the Emerald City, the Yellow Brick Road led to the Bunny Ranch.

When she’s performing, she clicks the heels together and slams them on the stage. You’ve got to do what you can to compete for customers’ attention in an environment awash in sensory distractions.

I’m there to talk about Stormy Daniels’ imminent appearance. Karma has other concerns, though.

“[Sex work] is not a sad, seedy industry like some people want it to be,” she tells me. She’s concerned about the portrayal her profession gets in the media. “Especially with SESTA and FOSTA (recent pieces of federal legislation) being a huge thing… so many of us are independent workers. We don’t need to be saved. We don’t need to be rescued. We need to be represented.”

She’s referring to the U.S. House’s Fight Online Sex Trafficking Act (FOSTA) and the Senate version, the Stop Enabling Sex Traffickers Act (SESTA), which passed earlier this year. The law was intended to address sex trafficking on websites like Backpage and Craigslist’s personals sections – and it has – but it’s also drawn criticism by many in the sex worker community for taking away tools they used to keep themselves safe.

“People used Backpage and websites like that to talk to each other and screen dangerous clients,” Karma said. Now, those sex workers are in the dark – and in some cases, back out on the streets.

Whether or not she signed up for it, for many women – and in particular for sex workers like Karma – Stormy Daniels has become a focal point of a national conversation about women’s empowerment, the status of the sex industry and the influence powerful men have on both.

Trump initially denied the entire story, but Cohen later said he had used his own personal funds to pay Daniels through an LLC. The President was eventually forced to acknowledge a reimbursement to Cohen for payment to Stephanie Clifford in a required financial disclosure in May.

The disclosure about the payment has prompted calls for the Department of Justice and Federal Election Commission to investigate it as a potential violation of campaign finance law.

Cohen is now facing a federal investigation of his own into alleged acts of fraud and concealment.

Karma is proud of Daniels. She hopes the attention she’s bringing to the industry will encourage Daniels’ supporters to advocate for broader change.

“People who want to help sex workers should be focusing on decriminalizing it,” she said.

Before leaving to look for greener – and more lucrative – pastures, Karma shared her theory of dancer archetypes with me.

“There’s definitely different types of dancers,” she says. “There’s students – they want to graduate without debt. There’s moms, single or otherwise, who want to make bank for their kids. There’s adventurers – like me, I would say. There’s people who start dancing and then don’t really have a plan. And then there are people who dance for a while and then want to get the hell out.”

And those archetypes, it seems, are fluid.

“I started as a student, and then I dropped out and became an adventurer,” another dancer, Bianca, tells me after I share Karma’s theory with her.

In Chicago, where she lives, she dances under another name. But tonight (and tomorrow, when she hopes to make $1,000 off of the crowd Daniels draws) she’s Bianca. Clubs don’t allow you to dance under the same name as another dancer – so they have to have backups, Bianca says.

Bianca, a wavy-haired brunette dressed in red lingerie and white lace-up boots, and her fellow Chicagoan dancer, Story, are in town for two nights only. Daniels appeared recently at The Admiral club in Chicago, where Story has danced before, but neither were able to secure a spot during her run there. They’re hoping the trip down to Indianapolis will be worth it.

“You can’t expect everyone who comes in to see Stormy to buy a lap dance, but you hope that they will support the club,” Bianca says.

At 23, Bianca – who started dancing in Portland, Oregon, 3 1/2 years ago after dropping out of school as a music education major – says she’s danced in six states. She doesn’t plan on dancing forever. But for now, it’s working for her. She even does competitive pole dancing as a hobby, although it’s too expensive to pursue on a more regular basis.

Story picked up the profession after graduating with a fine arts degree and medical debt.

“I was sobbing because I didn’t know how I was ever going to pay that,” she says.

Bianca and Story, it turns out, are a recent item.

“It’s a new thing,” Bianca says. “But so far it’s been amazing. It’s really incredible to be with another sex worker who understands the life. I was with a guy who hated what I did. I could never tell him about it when I had a good day. He didn’t want to hear it.”

Back to Wednesday night, and the Ponies’ hopes for a lucrative payday are swiftly vanishing. Stormy Daniels can draw a crowd, alright, but they’re there to see her. She sucks up all the oxygen in the room. 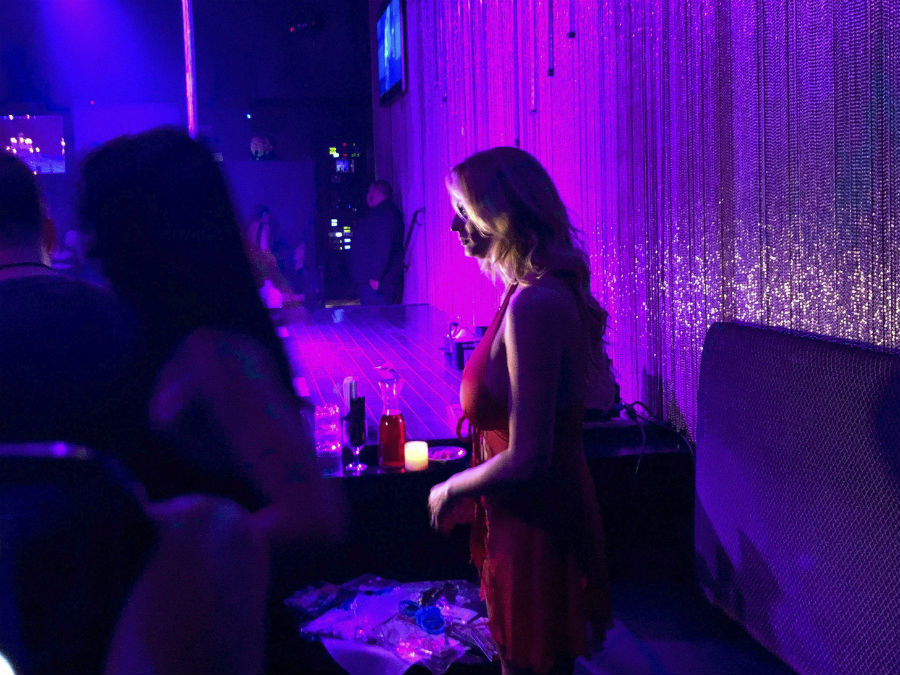 Stormy Daniels holds a meet-and-greet with patrons during her appearance at the strip club Gossip on Saturday, May 5, 2018, in Melville, New York. (Photo by Kevin Hagen/The Associated Press)

The line to meet Daniels fills the VIP area and empties out the main floor. The second dancer after Daniels on the main stage, Grace, draws perhaps the evening’s most impressive non-Stormy crowd of just five guys.

A short, 22-year-old Latina in a body-length fishnet getup, I first met Grace as she was scarfing down a shrimp alfredo off the club’s menu – she swears it’s actually pretty good – in between sets. It’s not 10 p.m. yet, but she’s already made her money for the evening, $200 in five hours, although she’s hoping to maximize the remaining dance time.

Grace has been dancing for three years since she was 19.

What would she rather do?

“I know this is cliché, but nursing would be awesome,” she says.

While Grace finishes carbing up for her second act, club owner Westlund wants to talk about his side of the industry.

“You ask 10 people, seven of them have been to a strip club,” he says. “Gentlemen’s clubs are a $3 billion industry. We have more people coming through our doors than the NFL, the NBA, the MLB and the NHL combined.” (The NFL raked in an estimated $13 billion alone in 2015, so that may not actually hold up.)

Westlund says he sold more than 100 presale tickets for Daniels’ show. He’s hoping her appearance generates two-to-three times as much revenue as usual.

It will undoubtedly be lucrative for Daniels, too, who could make $5,000 just for showing up at a club the Pony’s size, according to Forbes. And that’s before factoring in photo fees, and the wads of cash fans have been throwing at her all night.

If she’s pleased about that, it’s hard to tell from her expression. Walking back to the dressing room after her meet-and-greet, flanked at all times by her security guards (called “The Dragons,” Westlund says), Daniels has the look of someone who’d rather be anywhere else.

“She looks miserable,” a dancer tells me – adding that she hasn’t made any money tonight.

For her second set of the night, Daniels shows up on stage in a sparkly firefighter’s uniform, complete with a strobing helmet light, to “Burning Down the House” by the Talking Heads. The whole set is fire-themed, it turns out: “Fire Woman” by The Cult; “She Rides” by Danzig; and “Heavens on Fire” by KISS.

Daniels doesn’t stick around once the final song winds down. She heads back to her bus, off to a weekend stint in New England.

I catch up with Bianca and Story, who are going back to Chicago in the morning, on my way out. They landed a couple of dances, they say, but aren’t going to hit the $1,000 night they’d hoped for.

Before I go, Story has one last thing for the article: her outline of the perfect lap dance.

“I think the perfect lap dance is when a guy – or a girl – respects my boundaries and allows me to express my creativity,” she says. “And he leaves a big tip.”