UPDATE: Teacher arrested for terroristic threats wrote 'Vegas will lose its luster after me'

A friend named James contacted police after he said Leslie McGourty was making statements about poking "a lot of holes in a lot of people on Saturday" and that she was going to be dead Sunday. The friend took screenshots of the conversation and sent them to police.

According to the report, McGourty wrote she was "forming a plan" that would "blow everyone's mind" and that "people will remember me." She also wrote that since she was a woman, she would be remembered.

James and McGourty exchanged texts referencing the 1 October shooting but also other mass killers, according to the report. McGourty wrote, "I have the means, motive, and brains. Vegas will lose its luster after me." 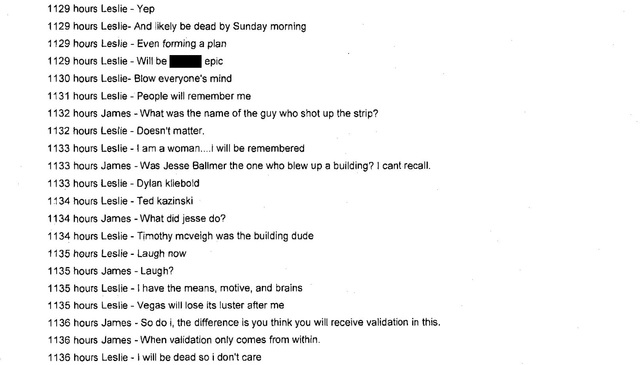 At one point, James texted McGourty, "You have a hole deep inside you are trying to fill. A little voice screaming to be cared for." She responded, "But since nobody's filling it I'm going to poke a lot of holes in a lot of people on Saturday."

James later asked, "Again to what end than to hurt other people?" McGourty responded, "Imagine knowing exactly the moment that you're going to die. I know exactly that your favorite song will be playing. By your favorite band. It's just too perfect."

Police said she had planned to go to the Life of Agony concert at Beauty Bar on May 19.

She later wrote, "Who knows? Maybe I will start a movement. Another me-too movement. But this time in which women feel empowered enough to become serial killers."

She was taken into custody at 7:47 a.m. McGourty told police that she did send the text messages but she never planned on hurting anyone.

UPDATE 7 P.M. MAY 17: Private text messages that were sent to police led to a local teacher's arrest, according to the teacher Leslie McGourty.

McGourty, who bailed out of jail Thursday morning, told 13 Action News she had sent text messages to an acquaintance which she believes were take out of context. She would not specify what the text said, but claimed she did not mean what she had said in the texts.

Students of McGourty described the Physics teachers as nice, but could sense she had personal issues.

"Ms. McGourty was a pretty nice teacher," student said. "You would kind of see her personal world blend in with her work life."

McGourty's mother Natalie did speak to 13 Action News by phone. She defended her daughter saying she has been a teacher for more than 22 years.

"She comes from law-abiding citizens, we don't even own guns," Natalie McGourty said.

The principal at Bonanza High School did send out a letter to parents Thursday morning alerting them about McGourty's arrest, but reassuring them the arrest had nothing to do with the high school.

ORIGINAL: According to the Las Vegas Metropolitan Police Department, a teacher was arrested for making "terroristic threats" Wednesday.

Police have not released the details of the alleged threat.

The teacher's name is being reported as Leslie McGourty. Police released a mug shot of her Thursday morning.

13 Action News spoke with the mother of that teacher. The mother, who lives out of state, was concerned for her daughter. She tells 13 Action News her daughter teaches physics at Bonanza High School. We are told the teacher has been in Las Vegas for 3 years; however, she's been teaching for 25 years.