UPDATE APRIL 6: It's not just the military community, family and friends and Las Vegas that are mourning Maj. Stephen Del Bagno after his F-16 crashed during routine training. He will be missed by Hollywood too.

Bagno, whose call sign was "Cajun," was a consultant for the upcoming movie "Captain Marvel," which is set to be released next year.

Marvel Studios sent the following tweet after the Thunderbirds pilot was identified.

We lost a friend yesterday. Marvel Studios is saddened to hear of the loss of Air Force Maj. Stephen Del Bagno, who we were lucky to get to know during his time as a consultant on Captain Marvel. We will miss him greatly; he’ll always be part of the team.

Actress Brie Larson, who plays an Air Force pilot who becomes a hero in the movie, posted this on Twitter.

I’m so sad. Will have more to say tomorrow. We miss you Cajun. 💔

Del Bagno was flying his Fighting Falcon during a routine aerial demonstration training flight. He was Thunderbird No. 4. According to Del Bagno's LinkedIn profile, he has been a Thunderbird since November 2017.

Del Bagno was 34 and lived in Valencia, California.

"We are mourning the loss of Major Del Bagno," said Brig. Gen. Jeannie Leavitt, 57th Wing Commander in a statement. "He was an integral part of our team and ourselves hearts are heavy with his loss. We ask everyone to provide his family and friends the space to heal during this difficult time."

ABC Military expert retired Col. Steve Ganyard says the tricks the Thunderbirds do are dangerous, but a tragedy like this is also mystery because of how experienced the pilots are and how much training they go through.

Del Bagno himself had logged more than 3,500 flight hours in 30 different planes.  A native of California, Del Bagno also worked in the Air Force stationed in Alabama and Florida.

Ganyard says the Air Force could also be looking into video to try and find a cause of the crash since demonstrations are usually taped.  He says they'll look into both the possibilities of pilot error or mechanical issues.

Plans were being made Thursday for a memorial for Del Bagno.

UPDATE 9 P.M. APRIL 4: A pilot  for the United States Air Force Thunderbirds died after his F-16 Fighting Falcon crashed during a routine training flight over the Nevada Test and Training Range.

Nellis Air Force Base says an investigation is underway to figure out the cause of the crash. The pilot's identity has not been released.

This is the 2nd incident involving a Thunderbird plane in a year. A Thunderbird flipped over after landing during a “familiarization flight” for an air show in Ohio in June 2017. The pilot and his passenger were hospitalized with injuries after the incident.

A Thunderbird also crashed after a flyover over a graduation ceremony at Air Force Academy in 2016. The pilot survived that crash.

The Thunderbirds were scheduled to perform this weekend at March Air Reserve Base near Riverside, California. That performance has been canceled.

The crash on Wednesday was the third U.S. military crash this week.

Four crew members were killed Tuesday after a Marine helicopter crashed during a training mission in California.

A Marine Harrier jet also crashed during takeoff on Tuesday in East Africa. The pilot was able to eject before that crash.

The Thunderbirds formed in 1953 as the Air Demonstration Unite at Luke Air Force Base in Arizona. They moved to Nellis in 1956.

ORIGINAL: A F-16 assigned to Nellis Air Force Base in Las Vegas crashed on Wednesday morning.

The plane crashed around 10:30 a.m. during routine training on the Nevada Test and Training Range, which is located north of the Las Vegas valley.

NAFB says that emergency responders are on the scene. The condition of pilot is unknown at this time.

The range covers more than 3 million acres. NAFB did not give any other information about where the plane crashed or why. 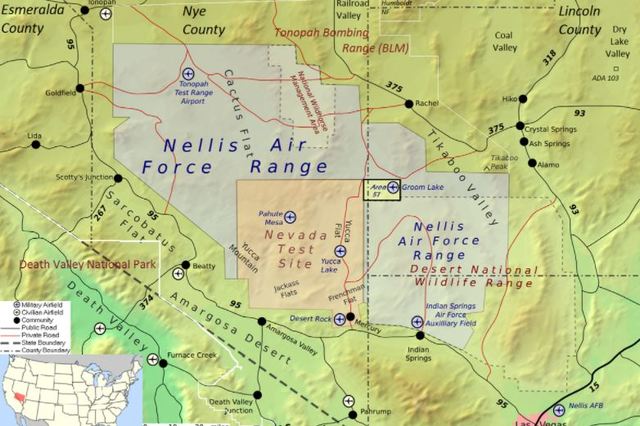