Nissan owners are concerned about the vehicle's safety due to engines that stop while driving in the heat. Some people were told to try a different type of gas, but is it a bigger problem?

UPDATE JULY 12: Judging by the reaction on social media -- this problem is happening to hundreds of drivers all across Las Vegas.

While some customers posting on Facebook report the problem went away when they switched to 91 octane gas, others say it made no difference.

Leah writes, "The dealership told us to put 91 octane in but it hasn't worked. We have just spent wasted money in gas and time. We are still having the same problem... I find it ridiculous and dangerous for the customers to be dealing with such negligence."

A complaint posted June 28 by a Las Vegas Sentra owner states, "while driving at various speeds or while parked, the vehicle stalled without warning."  The driver says a dealership recommended using higher octane fuel, which was tried, but "the failure persisted... The manufacturer was notified... And an investigation was opened."

Other car owners say the problem extends beyond Nissan.  This Service Bulletin from General Motors was posted June 30 regarding cars stalling or hesitating in high ambient temperatures.  It advises customers to use more expensive gas, "with octane levels greater than 91, refrain from extended idling periods and park in a covered garage."

LAS VEGAS (KTNV) -- Scorching summer temperatures are testing the limits of nearly everything. Contact 13 discovered a heat-related danger on the road that's lurking under the hoods of countless cars. The car maker is aware of the problem, but doesn't want to say much about it.

Drivers tell Contact 13 it's time for a recall before the danger turns deadly.

"I'm scared driving this car, to be honest with you," says Karen Branton.

Karen keeps tabs on her teenage twins' 2012 Nissan Versas to make sure they're safe. She takes each car herself once a week and recently had a close call.

"Got off the interstate. Drove into a Kohl's parking lot. I was driving and the car just stopped."

No warning lights, no alarms and the gas tank was nearly full.

"I had no control of the steering wheel. I had no brakes," Karen says. "Luckily it just coasted to a stop."

So Karen called a service advisor at the Planet Nissan dealership.

"And he said, 'well we've already had about 40 cars this morning with this same problem.'"

Planet Nissan confirmed they've been seeing 30 to 40 cars a day for several weeks. And it's not just Versas. They're also seeing engines suddenly die in Sentras and some Altimas.

Other Nissan dealerships in Las Vegas are getting the calls too. What are they telling customers like Karen?

"It has something to do with vaporizing," she says.

Karen was told to switch to more expensive, higher octane fuel. We asked the U.S. Energy Information Administration about that.  The federal agency says the vapor pressure of gasoline does not vary between grade. So telling customers to spend more on premium gas could just be a waste of money.

Contact 13 learned other Nissan owners are getting different stories. One Versa driver said she was told not to fill her gas tank all the way to full. And when our producer called another local dealership, he was told that using name brand gasoline might help.

"I think it's just a band-aid that they're throwing out there," says independent mechanic John Skaw of Vegas Auto Care.

Skaw has a Nissan Rogue in his shop that he says did the same thing.

"It's absolutely dangerous," Skaw says.  "Temperatures over 100 degrees -- 105 degrees -- it stalls. It stops. It dies out. Does everything that it's not supposed to do."

Skaw: "Well obviously they posted a T.S.B. about it. So they know something.:

T.S.B.'s are Technical Service Bulletins. Contact 13 discovered one Nissan posted last August for Versas made between 2012 and 2016. 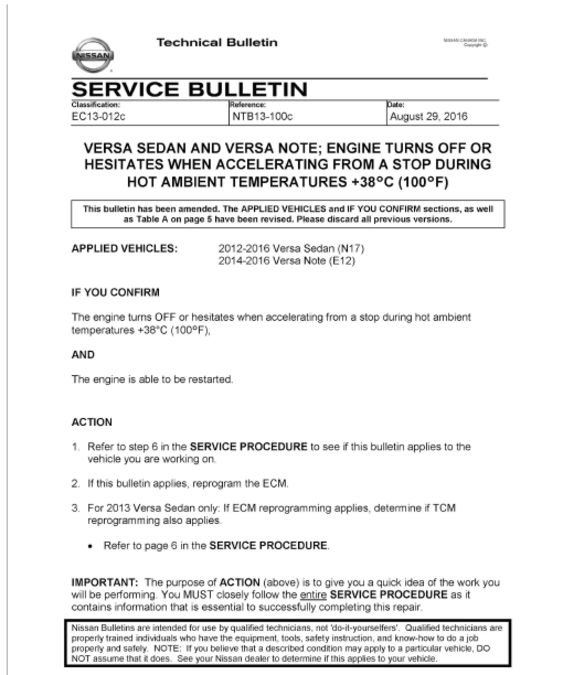 It reports "the engine turns off or hesitates when accelerating from a stop.during hot ambient temperatures."

Both point to the cars' computer.

Darcy: "When do you think something like this should rise to the level of a recall?"

But Nissan hasn't done that.  Customers like Karen wonder what they're waiting for.

"Parents buy these cars because they are very good on gas mileage," Karen explains. "The purchase price is great! But if my kids are going to be unsafe in this car, I don't want anything to do with it."

One dealership told us recalibrating cars' computers is the fix.

We tried to get a clear answer from Nissan North America. They declined an on-camera interview and provided the following statement:

We are checking with our dealers in the area and will have field engineers investigate customer-reported issues similar to those you describe. Customer satisfaction is of the utmost importance and we will work directly with our customers to resolve their issues.

Contact 13 is not aware of any accidents or deaths that have been attributed to this problem, but the fear of a crash is real.

If you've had this happen in your car, be sure to report it to the National Highway Traffic Safety Administration by clicking here.