A Henderson family says that a dryer started a fire in their home and they could have lost everything. Tricia Kean reporting. 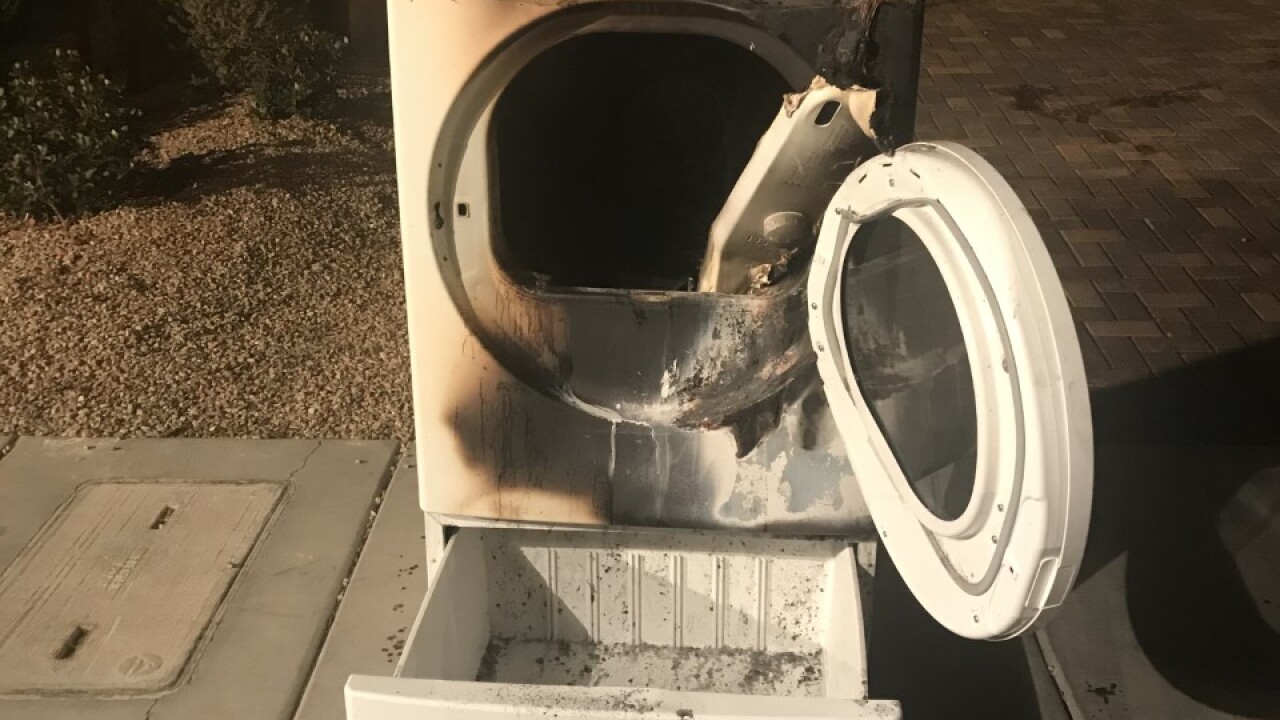 HENDERSON (KTNV) — A harrowing house fire leaves a local family only moments to escape. The culprit was right in their laundry room. Contact 13's Tricia Kean shows us what the family says was a ticking time bomb.

"All of a sudden I said, there's flames! Flames just started coming out from the bottom of the dryer," says Sheri Long.

John and Sheri Long say their own dryer nearly killed them. Back in January they were doing laundry and their Electrolux dryer caught fire.

"The flames started getting higher and higher," says John.

Sheri called 911 and the family ran out of the house.

"It was 26° outside that night... My youngest had no shoes on and they didn't have jackets," says Sheri.

Sheri snapped these pictures of the scene. Henderson firefighters quickly knocked out the flames.

"All I could think was everyone is outside and we're safe," says John.

Firefighters put it out, but the house suffered major damage. The total cost to their insurance company for repairs and hotel stay:

The couple started digging and discovered class action lawsuits involving Electrolux. It turns out in 2014, the company agreed to settle allegations about defects causing its dryers to catch fire.

The Henderson Fire Department's incident report says Sheri and John's dryer fire originated "...under the lint trap..." The initial flare up was "...most probably the electrical wiring..."

The report from the insurance investigator goes on to say: "The cause of the fire was the result of an unknown mechanical event..."

"It was a manufacture defect," says Sheri.

John and Sheri blame Electrolux for the fire and say the company owes them.

"I want my deductible back. I want back my $2,225 that was my personal out-of-pocket expense due to their faulty appliance," says Sheri.

But the couple's insurance company isn't going after Electrolux, stating "...the product must be less than 10 years old at the time of the loss..."

"Our dryer was 10 years and 4 months. So they said their hands were tied," says Sheri.

But John and Sheri say that's no defense for what happened and everything they've been through.

"It doesn't excuse any kind of warning if they had known about the defects that they were experiencing," says John.

The couple has reached out to Electrolux directly, but still can't recoup their deductible. Contact 13 also reached out. No one from the company was available to talk. But they issued this statement:

"Electrolux dryers are safe when installed, maintained and operated according to the dryer's Use & Care Guide. In this case, neither the fire department's report nor any of the additional materials provided by the Longs identified a defect in the dryer."

Electrolux goes on to say: "Because we take the safety of our products very seriously, we would be happy to consider any additional information that the Longs believe supports their claim."

And they're right. Along with citing that "mechanical event", the report also says "the specific ignition... and cause of this fire could not be conclusively determined." But Sheri and John aren't done fighting.

"Ultimately I want everybody to know if they have this appliance there's a danger. Any household in America could have this ticking time bomb in their house," says Sheri.

It's so important you really understand your insurance policy. Make sure you're protected, just like the Longs, in case of an emergency.

If your having a dispute with your insurance, contact the Nevada Division of Insurance. They may be able investigate your case and help you come to a resolution with your carrier.