The Nevada Department of Transportation announced that they're shutting down U.S. Highway 95 at Interstate 15 during the Electric Daisy Carnival.

UPDATE JUNE 6: Project Neon construction continues tonight as The Nevada Department of Transportation (NDOT) will close north and southbound U.S. 95 at Interstate 15 from 10 p.m. until 5 a.m.

Despite the previously mentioned closures, Interstate 15 and the “Spaghetti Bowl” interchange ramps will remain open.

UPDATE MAY 18: Once Project Neon wraps up, there will be 28 new bridges. This weekend, crews will be building one over U.S. Highway 95. They will be placing 6 concrete beams in place. They are 170 feet long and weigh 200,000 pounds each. That's why the full closure is needed. It's a safety issue.

During the closure, crews will be working around the clock to make sure everything is done in time to re-open Monday morning. So far, one million man-hours of work have been completed on Project Neon. It is on time, on budget, and 65 percent complete. According to NDOT, the project couldn't have come at a better time.

Roughly 180,000 vehicles drive through the U.S. Highway 95 on a weekend day, so this closure is going to affect a lot of people, and there's still more to come. In the next year, there are five full closures planned, before construction wraps-up, July 2019. 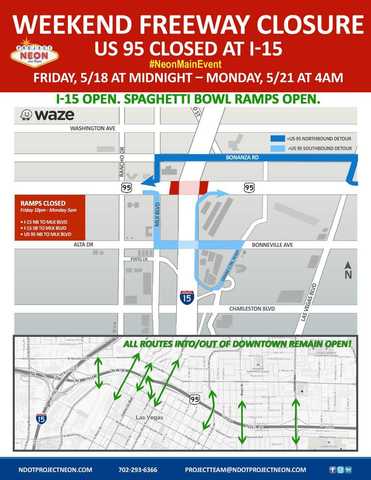 UPDATE MAY 16: The Nevada Department of Transportation is reportedly opening an extra lane on Interstate 15 during EDC heavy traffic times.

CORRECTION: NDOT has told 13 Action News that no additional lanes will be opened to help with EDC traffic. We are awaiting further comment from Insomniac.

A message from our Head Night Owl, @PasqualeRotella: A little info before EDCLV 🙋‍♂️

ORIGINAL ARTICLE: The Nevada Department of Transportation announced that they're shutting down U.S. Highway 95 at Interstate 15 during the Electric Daisy Carnival.

"It was unavoidable since the following weekend is Memorial Day. And the Electric Daisy Carnival moved up its festival date by a month, which also threw off our closure planning," NDOT wrote in a statement to the press. 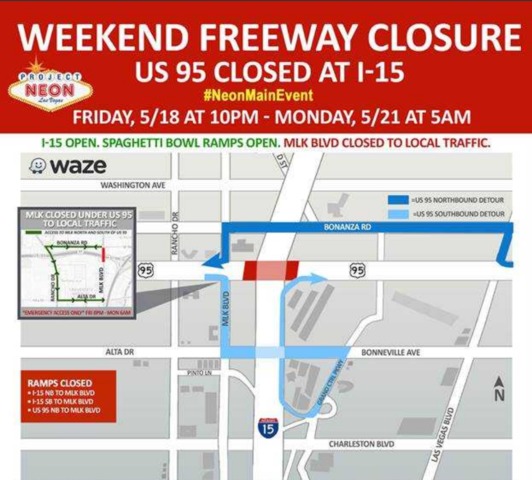 Interstate 15 and the "Spaghetti Bowl" ramps will also stay open, and NDOT says they have been in contact with EDC organizers about coordinating alternative routes.

This will be the second of six freeway closures as part of Project Neon.