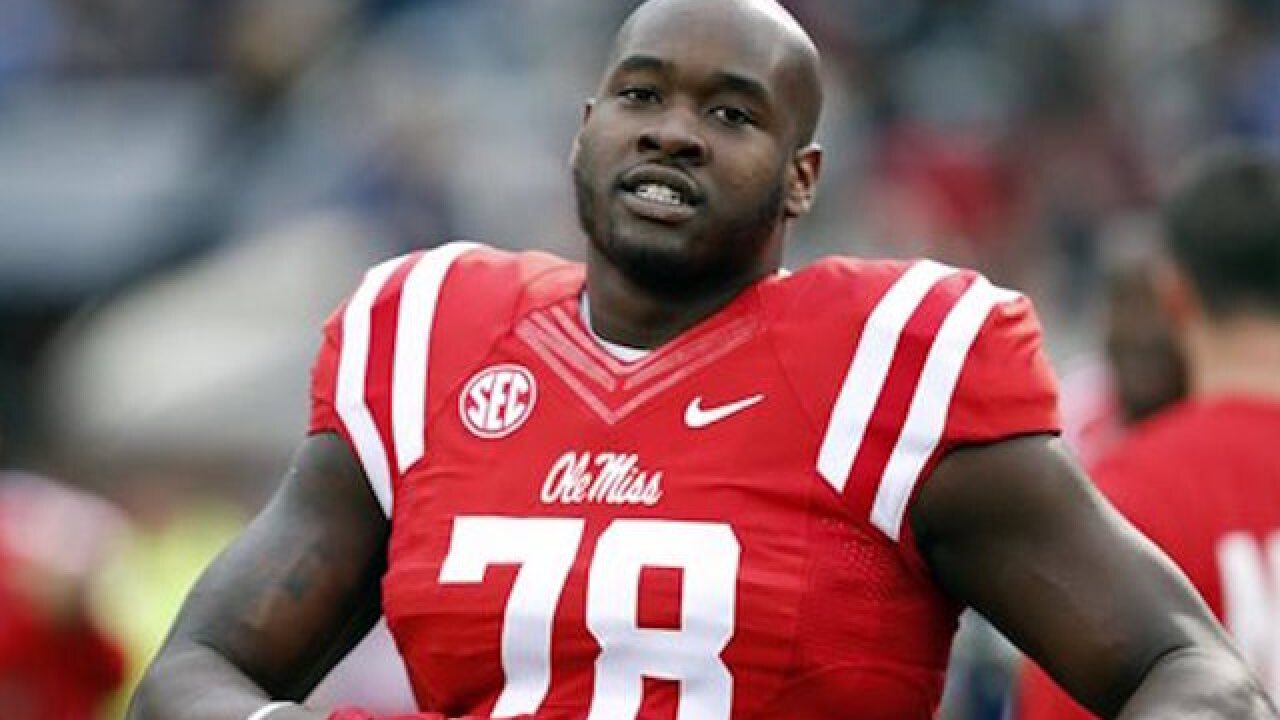 Copyright Associated Press
Rogelio V. Solis
<p>In this Oct. 24, 2015 file photo, Mississippi offensive lineman Laremy Tunsil (78) loosens up prior to a game. Mississippi will investigate former offensive lineman Laremy Tunsil's comments that he accepted money from a member of the football staff while playing at the school. The university said in a statement Friday, April 29, 2016, it is "aware of the reports from the NFL Draft regarding Laremy Tunsil and potential NCAA violations during his time at Ole Miss" and "will aggressively investigate and fully cooperate with the NCAA and the SEC." (AP Photo/Rogelio V. Solis)</p>

Mississippi coach Hugh Freeze was surprised by former Rebels offensive lineman Laremy Tunsil's statement at the NFL draft that he accepted money from a coach while at the school.

Now the fifth-year coach is asking for patience while the school continues its investigation.

"I was shocked like everyone else living it out in real time," Freeze said of Tunsil's draft night comments. "But I'm confident our administration is going to find the facts and then give us a good report on it."

Freeze said Thursday on an SEC teleconference he is not involved in the "fact-finding process" but has been told that the school has "made a lot of progress" in the investigation.

Tunsil acknowledged after being selected by the Miami Dolphins that he accepted money. Freeze was also in Chicago for the draft.

There was also a post on Tunsil's Instagram account — which he said was hacked — showing an alleged text conversation with an Ole Miss football staff member about arranging payment for bills.

The football program is already under NCAA investigation. The school received a Notice of Allegations from the governing body in January and is preparing its response.

The Ole Miss athletics department has been largely silent since Tunsil's comments last week, other than to release a statement on Friday that it was aware of the situation and would "aggressively investigate and fully cooperate with the NCAA and the SEC."

"I'm trying to be patient," Freeze said. "That's difficult sometimes because you want to respond but there's great wisdom in being patient and making sure you get the facts and we're still in that process."

Tunsil's draft night comments were the latest twist in an NCAA investigation that's lasted nearly four years. The review started in 2012 with the women's basketball team and quickly spread to the football and track and field programs.

The case appeared to be wrapping up before Tunsil's potential draft-night bombshell. Ole Miss received its Notice of Allegations in January. NCAA rules usually give a school 90 days to respond, but the case received a 30-day extension in late April.

If Tunsil's comments lead to more allegations against Ole Miss, the case could be delayed several months while a new Notice of Allegations is produced.

"I think it depends on what the facts reveal," Freeze said. "We haven't even discussed the next step."

Freeze has turned Ole Miss into one of the SEC's better programs over the past few years. The Rebels have beaten Alabama two seasons in a row and finished with a 10-3 record last season, including a victory over Oklahoma State in the Sugar Bowl.

One reason Ole Miss was able to jump into the league's elite was its sudden ability to recruit elite athletes. The Rebels had a loaded 2013 class that included Tunsil, receiver Laquon Treadwell and defensive tackle Robert Nkemdiche. All three were selected in the first round of last week's draft.