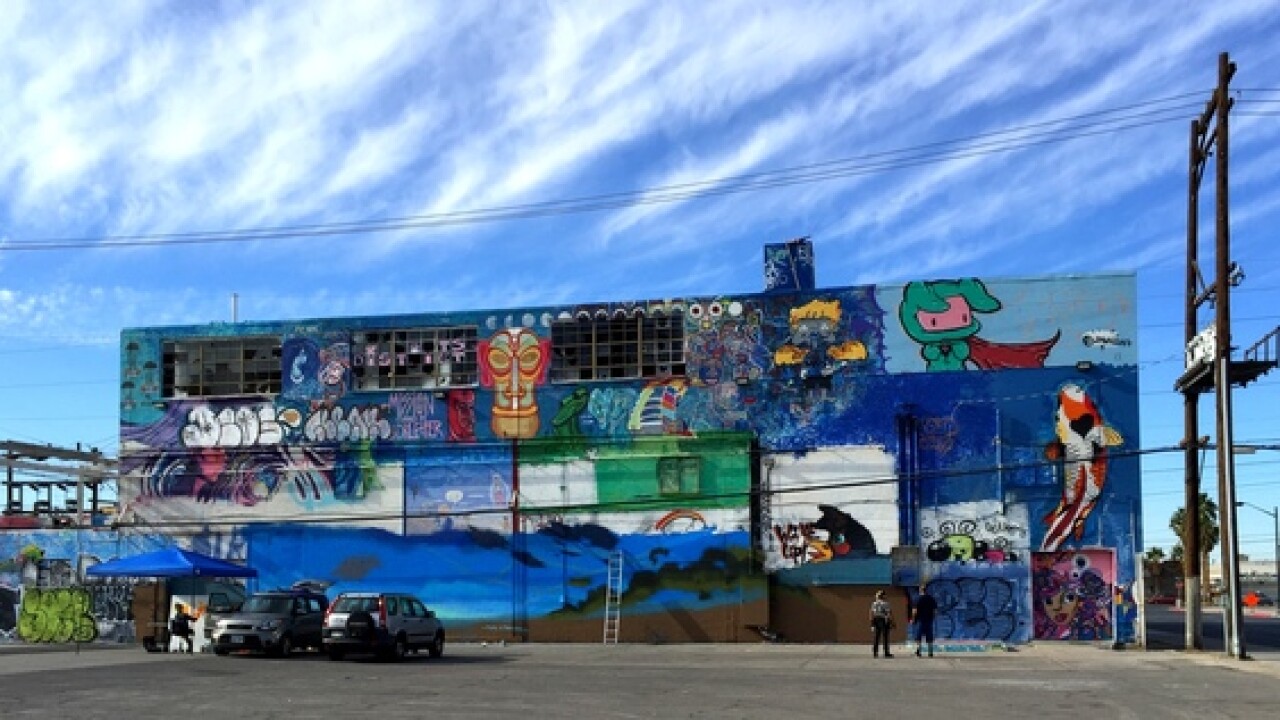 Local artist Gear Duran is concerned about what is happening in North Dakota and is expressing that concern in a colorful way on the side of a building in the arts district in Downtown Las Vegas.

The construction of a pipeline that would run from oil fields in North Dakota to southern Illinois has led to increasingly violent protests on an Indian reservation the past two months and international media attention.

An elder for the Standing Rock Indian Reservation established the Sacred Stone Camp over the summer as a center for cultural preservation and spiritual resistance to the pipeline.

The Standing Rock Sioux tribe was joined by representatives of 300 federally recognized tribes and several thousand supporters over the summer as the protest gained more and more attention from around the world.

RELATED: Competing groups are trying to define the Dakota Access pipeline debate. So where does the truth lie?

On Sept. 3, construction workers reportedly bulldozed a section of land that the Indian tribe had identified as sacred ground. When protesters entered the area, security guards used pepper spray and dogs to drive the protesters out. Several people were bitten during the incident.

In late October, local soldiers and police in full riot gear cleared another encampment that was directly in the proposed pipeline's path.

The protests have also led to several arrests or warrants for arrest, including former Green Party presidential candidate Jill Stein and her running mate Ajamu Baraka.

A warrant for journalist Amy Goodman was also issued for filming the incident on Sept. 3.

Actress Shailene Woodley was arrested on Oct. 10 along with 27 other people at the time. So far, more than 140 people have been arrested for their involvement in the protest in North Dakota.

Duran, who claims to have the blood of two Indian tribes in his veins, is equally passionate about what he sees is happening to his Native American brothers and sisters in North Dakota.

Duran says that the giant protest mural on the Mission Building will contain some graphic imagery depicting what is happening at the protest camps. He says that he knows that some people will love it and others will hate it but he views the mural as a "moral imperative."

Duran, whom you may have also seen on the first season of the reality TV show "Skin Wars," started working on the mural a couple of days ago and hopes to have it completed by Monday or Tuesday but will return on First Friday, downtown's monthly art, music and food festival, to put the finishing touches on the mural.

Duran describes himself as a "digital cyberpunk art slayer and visual mercenary." He was born in Santa Maria, California, and attended the Gnomon School of Visual FX in Hollywood.

Duran, who is also known as Gearboxxx, made his name as a street graffiti artist. He moved to Las Vegas several years ago to do what he loves most -- create one-of-a-kind art -- and is now the owner of GBX3 Studios. He is also a body-painting instructor and has his own line of spray paint. He and girlfriend, Heather Hemann (also known as Calliope or the Duchess of Deco), are highly respected members of the local art community.

Woooooohooooo!! Day 1 complete mission accomplished. Got all the background hammerd in, now tomorrow we get to do the fun stuff. #nodapl #fightthepower #graffiti #lasvegasartsdistrict #lasvegas

A video posted by Gear Duran (@gearduran) on

Protest mural for the #dakotaaccesspipeline . Come out n support. Located in the arts district!! See you kids here!!

A video posted by Gear Duran (@gearduran) on