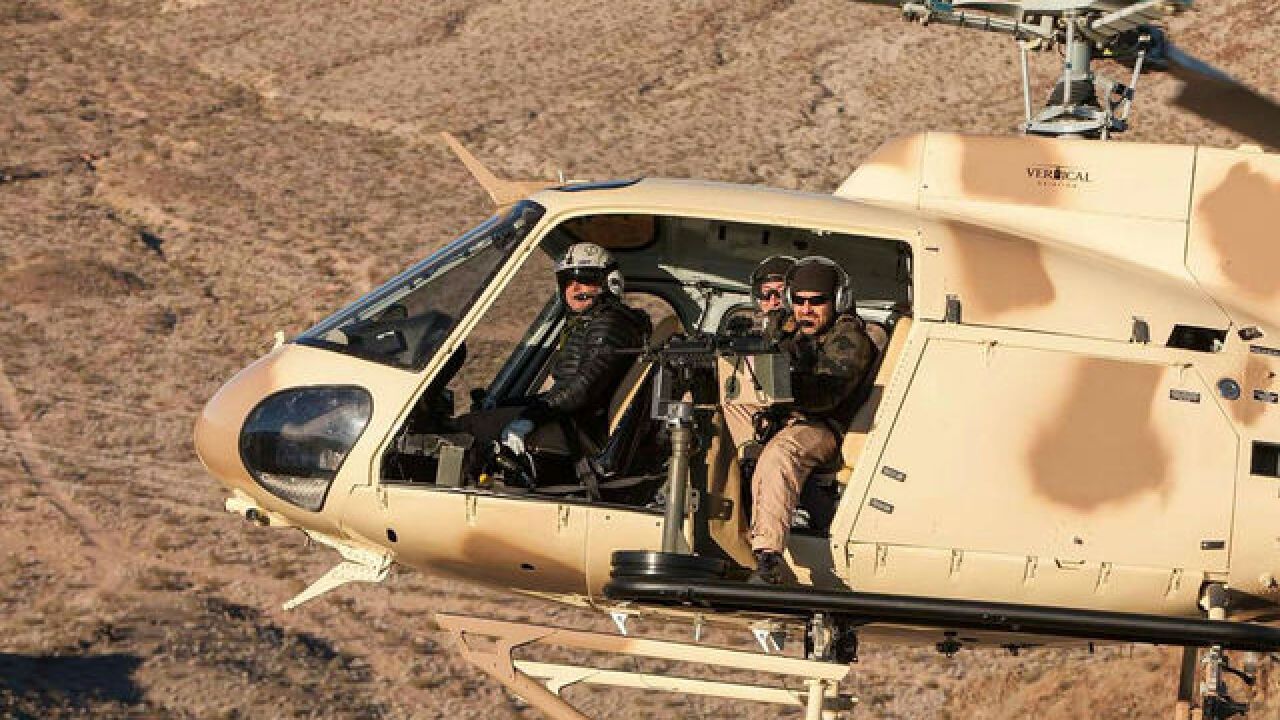 People used to come to Las Vegas for one reason and one reason only -- gambling.

But that has changed over the years. Las Vegas is now known for its headliner entertainment, fancy restaurants, abundant shopping and a variety of adventures.

Gunship Helicopters offers one of the most exciting adventures of all -- a true, helicopter door-gunner experience.

For those who are brave enough, Gunship flies thrill seekers in its doors-off helicopters over rugged desert terrain dotted with cacti, cows and the occasional human to a remote range on a rugged mountaintop south of Las Vegas.

Once the helicopter has reached the range, shooters (first-timers are welcome) will fire 50 to 52 rounds of ammo from a M249 SAW belt-fed semi-automatic weapon at a group of brightly-colored targets perched on barren rocks.

The adventure begins though as soon as you arrive at Gunship, which is located in nearby Boulder City.

After signing in, which includes checking your blood alcohol level, checking your weight (limit is 300 pounds per person) and making sure you are not carrying weapons, you will sit through a pre-flight mission briefing and ground simulation.

Next, you'll be outfitted with a flight suit and given eye protection if needed (make sure you check the dress code before you go). Gunship Helicopters takes both fun and safety seriously.

Next, you'll head out to one of their helicopters. Their primary and biggest helicopter is an AStar, which is the same helicopter that is used by the military, law enforcement, emergency responders and others around the world.

Once you have been buckled inside of the open-door aircraft, you'll receive instructions on how to move about the cabin safely and how to fire the gun. You will also be given a noise-canceling, wireless headset, which will allow you to communicate with the other passengers, Range Safety Officer, and pilot.

And then it is time to take off. It's also time to turn on and turn up the Vietnam-era classic rock music.

The low-level flight to the privately-owned range just south of Goodsprings provides the perfect opportunity to enjoy the rugged beauty of the Mojave Desert.

Upon arrival at the 71-acre range, the helicopter will activate its warning system for anyone who might be in the area and the Range Safety Officer will begin prepping the gun for firing.

As soon as everything is ready to go, it's time for the shooting to begin.

The helicopter will hover a short distance from the AR500 steel reactionary targets and the shooter will move into position and begin firing.

Once the shooting has concluded, the helicopter will fly back to its base in Boulder City. Shooters will then have the opportunity to purchase photos and video (sorry, no cell phones are allowed on the helicopters -- you definitely don't want to accidentally drop one of those out the door during flight!).

The price for the once-in-a-lifetime type experience is approximately $400 to $600 per person depending on the package that is chosen and worth every single penny. Non-shooters are also welcome to ride along for $99 and children (ages 15 and older) can also fly and shoot. Group discounts are available.