13 National, State and Local Parks to Visit Near Las Vegas 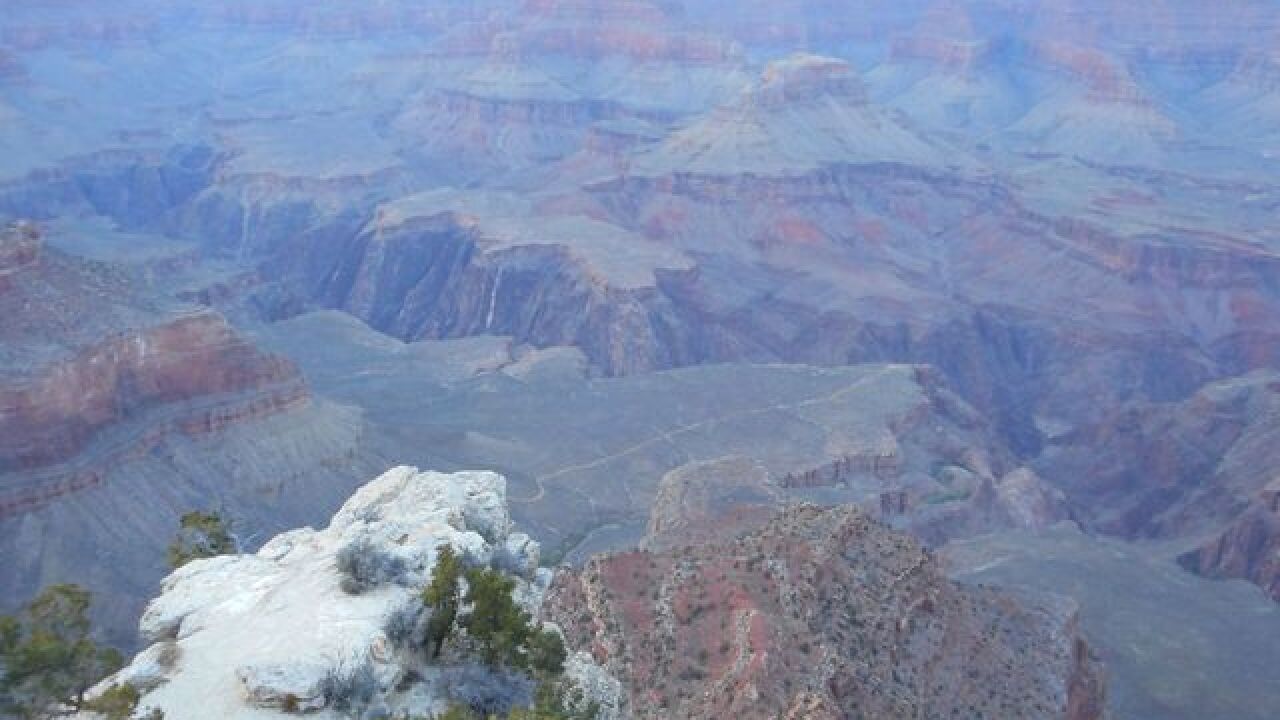 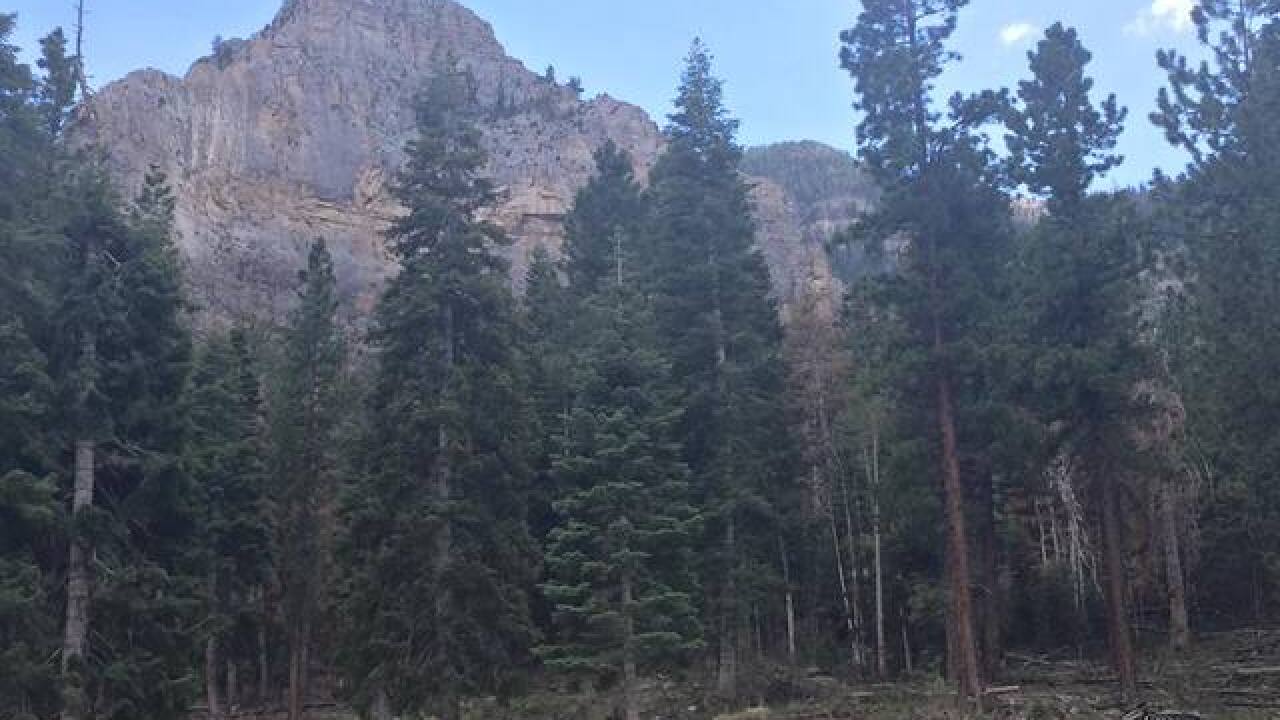 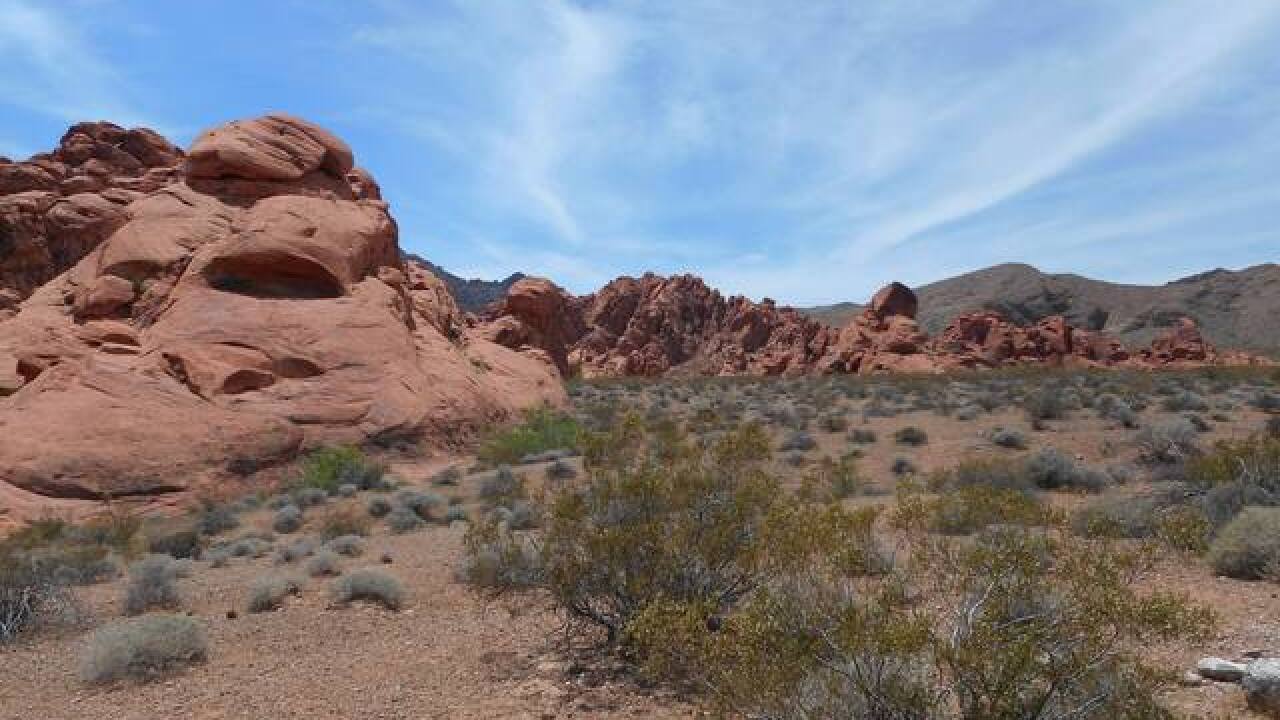 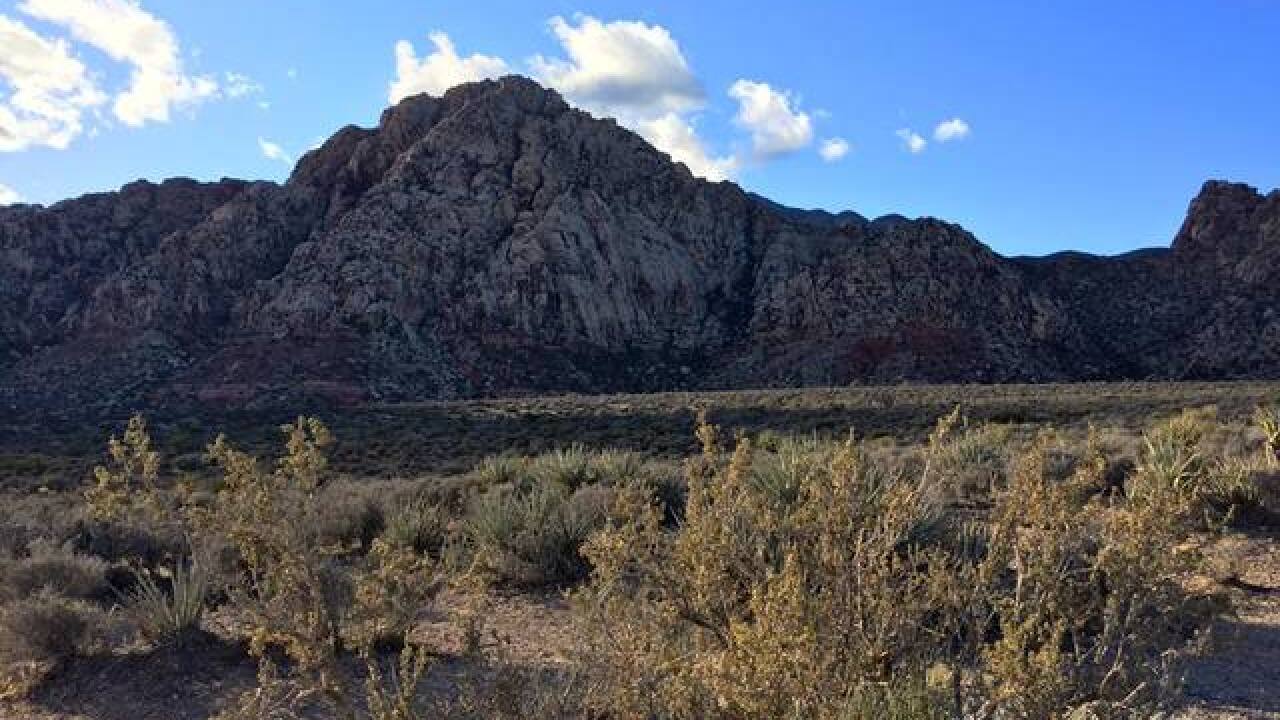 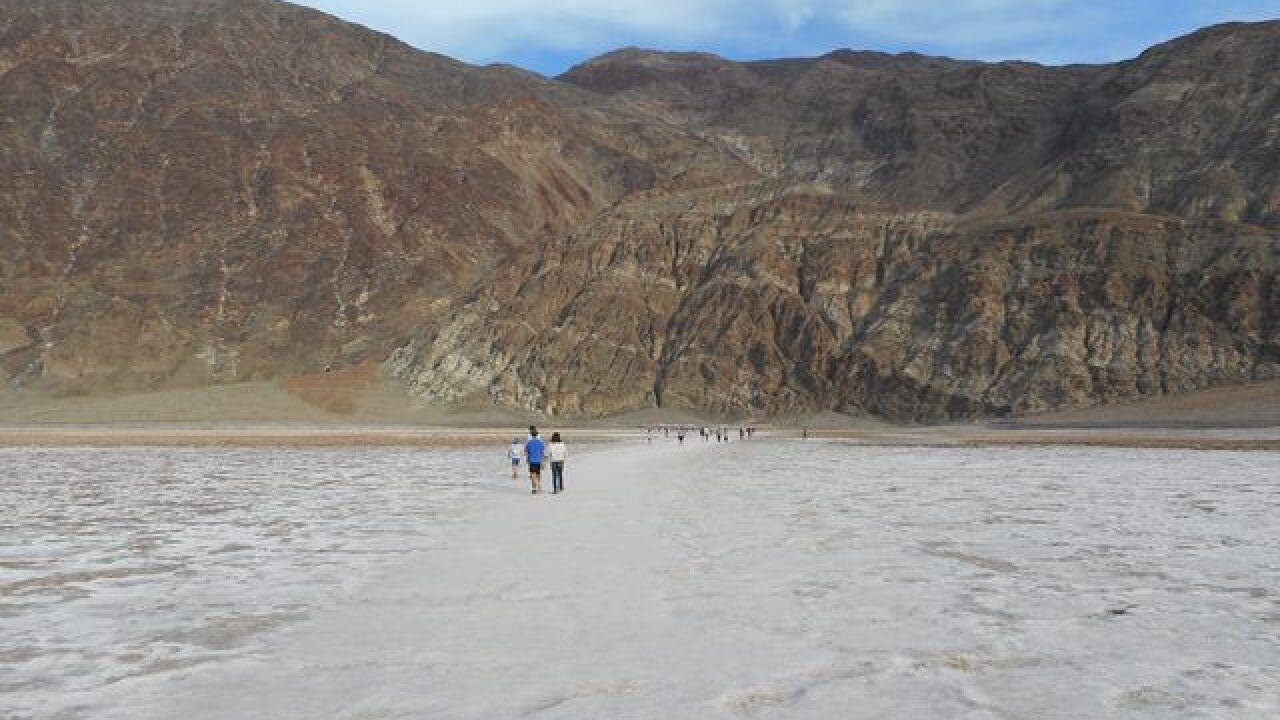 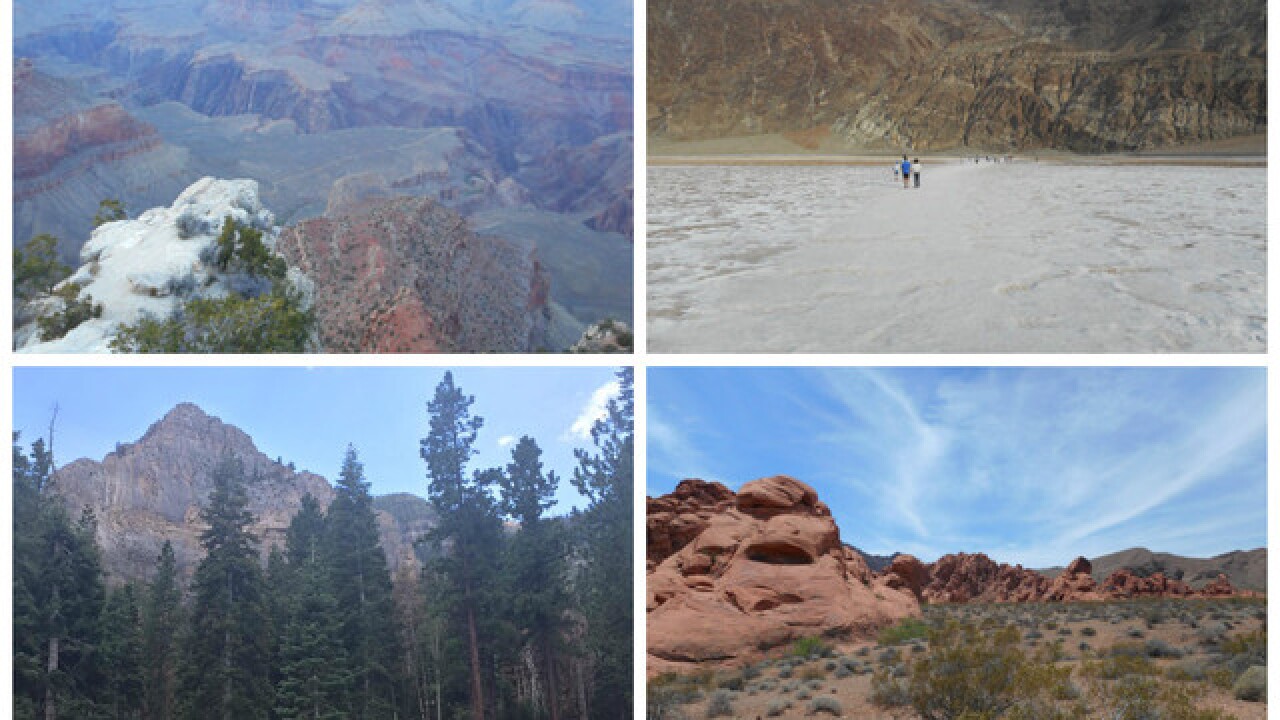 If you're itching to go outdoors, Las Vegas has many parks to offer -- from smaller city parks to state parks and national parks within a few hours drive.

1. Red Rock National Conservation Area
This might be the most obvious one but for good reason. While many hikers might not want to brave Red Rock during the summer, there are hikes such as Icebox Canyon that bring some welcome relief from the heat. On the opposite end, it is beautiful to visit in fall when the temperatures cool down. It also helps that it is right in our backyard!

2. Mt. Charleston/Spring Mountain National Recreation Area
Now if you want a big cool down during summer or winter, take the hour or so drive and go up to Mount Charleston. It is anywhere from 30 to 40 degrees cooler there. There are many hikes in the area, including up to the peak itself and Cathedral Rock, a short hike but uphill for almost the entire trek up. You can also venture over to Lee Canyon and take part of its summer activities. In the winter, many locals visit for snow and all the accompanying fun.

3. Valley of Fire State Park
Despite the heat during the summer, Valley of Fire is still a popular spot with its beautiful landscapes. It almost seems like you're on another planet's surface as you make your way around the park. There are also several hikes to take that can feel downright refreshing in the fall and winter.

4. Lake Mead National Recreation Area
Now if you want to cool down while still enjoying the heat, Lake Mead is the place to go. Plenty of boaters visit Lake Mead during the summer but there's also swimming and other water activities. There are also plenty of places to visit along the vast national recreation area, which extends into western Arizona. Trails such as Goldstrike Canyon and Arizona Hot Springs are open during the cooler months.

5. Death Valley National Park
While we have national recreation areas nearby, the closest national park is Death Valley. The majority of it is in California but there is a small portion in Nevada. There are such sites as Badwater (the lowest point in North America), Dante's View and Scotty's Castle. Despite being one of the hottest places on earth, Death Valley does occasionally get rain (and the aforementioned flooding) and this past spring, a wildflower bloom.

6. Zion National Park
While it's listed 6th on this list, Zion National Park was also the 6th most-visited national park last year and only about 2 1/2 hours from Las Vegas. The park is known for its steep red cliffs and canyons and plenty of hikes, including the Narrows and Angels Landing. It's a little less crowded in the winter months where there's the likelihood of snow.

7. Grand Canyon National Park
If you're ready for a long day trip or a weekend trip, the Grand Canyon is a great place to go about 5 hours away from Las Vegas. It helps that it tends to be cooler there than the rest of Arizona or Southern Nevada in the summer. Summer is a good time to visit the less-frequented North Rim since it is only open from May to October. The Grand Canyon can also get snow during the winter.

8. Floyd Lamb Park at Tule Springs
If you want an escape right on the edge of Las Vegas, Floyd Lamb Park might be a good bet. The park, a site for various events throughout the year, is 680 acres full of wildlife, lakes and views of nearby mountains. The Tule Springs Ranch, which is on the U.S. National Register of Historic Places, is located within the park.

10. Lincoln County state parks
Now it might seem a world away from Las Vegas, but Lincoln County has five state parks to explore several hours from the city. There is Cathedral Gorge, which has cave-like formations and cathedral-like spires. Miller Point offers views of the canyon. There's Beaver Dam right on the Nevada-Utah border with its streams and waterfalls. Spring Valley State Park (not to be confused with Spring Valley in Las Vegas) offers opportunities for fishing, camping and sight-seeing in addition to the Ranch House museum. Kershaw-Ryan State Park is at the north end of Rainbow Canyon with various trees and even wild grape vines climbing the canyon's cliffs. And finally, there's Echo Canyon, which offers a reservoir for fishing and other water activities.

11. Joshua Tree National Park
Joshua trees are a significant part of the desert landscape and two deserts -- the Mojave and the Colorado -- meet at Joshua Tree National Park in Southern California. The park, about 3 hours from Las Vegas, showcases the high desert with its Joshua trees while the low desert features the creosote bush. Depending on the level of difficulty (and the weather that day), visitors can take a nature walk to backpacking hikes. There is also plenty of stargazing amongst its dark skies.

12. Great Basin National Park
It's the only national park completely in Nevada, although it's not far from the Utah stateline. It's not the closest national park to Las Vegas -- around 4 1/2 hours -- but it is well worth the drive. There is 13,000-foot Wheeler Peak, the second tallest in Nevada, which climbers can summit. Visitors can also take a 12-mile scenic drive for views of the peak and other mountains. There are also the Lehman Caves, which can only be entered by a guided tour. Great Basin is another great place for stargazing.

13. Mojave National Preserve
Whether you're heading to Las Vegas or Los Angeles, there are miles upon miles of desert landscape to explore in the Mojave Desert off Interstate 15 and further south, Interstate 40. There are plenty of exits to take and even a scenic detour, accessed via Kelbaker Road in Baker, Calif. Of course depending on weather, there are plenty of things to do such as hiking, backpacking, horseback riding and four-wheel drive routes.

There are plenty more parks to explore nearby. If you have any suggestions, email katherine.jarvis@ktnv.com or comment on her Facebook page.