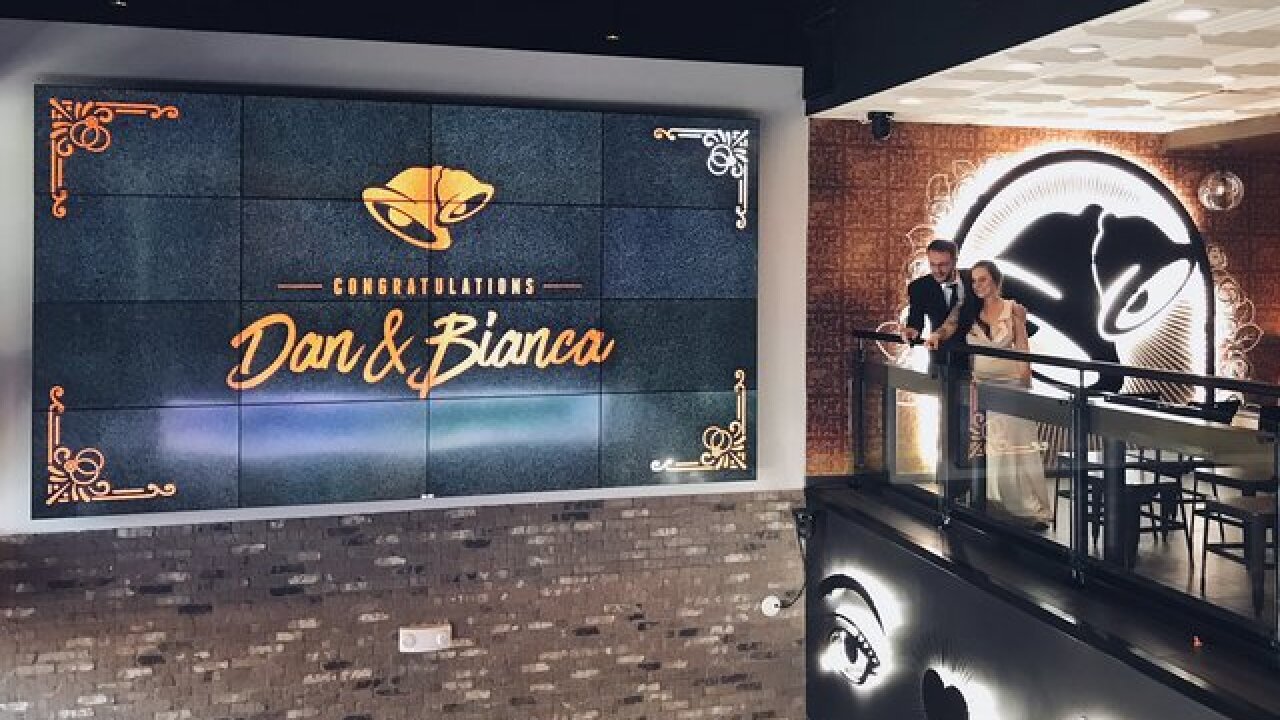 Copyright 2017 Scripps Media, Inc. All rights reserved. This material may not be published, broadcast, rewritten, or redistributed.
Taco Bell/Twitter

Yo quiero Taco Bell. And you for life. The first couple got married at the Taco Bell Cantina in Las Vegas Sunday.

New York City couple Dan Ryckert and Bianca Monda won the Love and Tacos Contest that led to the couple exchanging vows at the cantina on the Las Vegas Strip, which first announced on Valentine's Day that it would be holding weddings in a chapel at the restaurant.

Today's the day! #LoveAndTacosContest winners @DanRyckert & Bianca are getting married. Catch the wedding on our #Snapchat. pic.twitter.com/rOczqCM1kY

The #LoveAndTacosContest actually had two winners this weekend: @DanRyckert & Bianca and these awesome wedding crashers. pic.twitter.com/Yj7eToCAMI

Ryckert is a Taco Bell aficionado, even including on his Twitter profile "Taco Bell groom." He has ordered every item off the menu and for his birthday, his now wife surprised him with a visit to the seaside Taco Bell in Pacifica, California, outside of San Francisco.

Ryckert and Monda first met online in San Francisco and their love of Taco Bell was a common factor early on.

“It was actually one of the first conversations we ever had,” Ryckert told People in April. “She told me that she’d pick Taco Bell over a fancy Mexican place any day of the week, and I knew then that we were going to be a great fit.”

In addition to the wedding, the winning couple got airfare for six to Las Vegas, a Taco Bell-catered dinner at the cantina, Taco Bell wedding shirts, professional wedding photography/videography, a room at Planet Hollywood hotel-casino, two tickets for the High Roller, a private cabana at the Planet Hollywood pool, VIP table for six at Drai's Nightclub and entry for two and credit at the Qua Baths and Spa at Caesars Palace.

Ryckert and Monda's wedding is the first of many at the Taco Bell Cantina with weddings set to begin Aug. 7.

Ringing in at $600, the wedding package includes a ceremony performed by an ordained officiant, a private reception area for up to 15 guests, custom merchandise for the bride and groom, Taco Bell-branded champagne flutes, a Taco 12 Pack, a Cinnabon Delights cake and, last but certainly not least, a sauce packet bouquet. And all you have to do is order it off the menu.

Taco Bell has offered to pay for the package for the nine other finalists in the Love and Tacos contest. More than 150 couples competed for the chance to win a wedding at the Taco Bell Cantina.

For more details on getting married at the Cantina, check out Taco Bell's website.