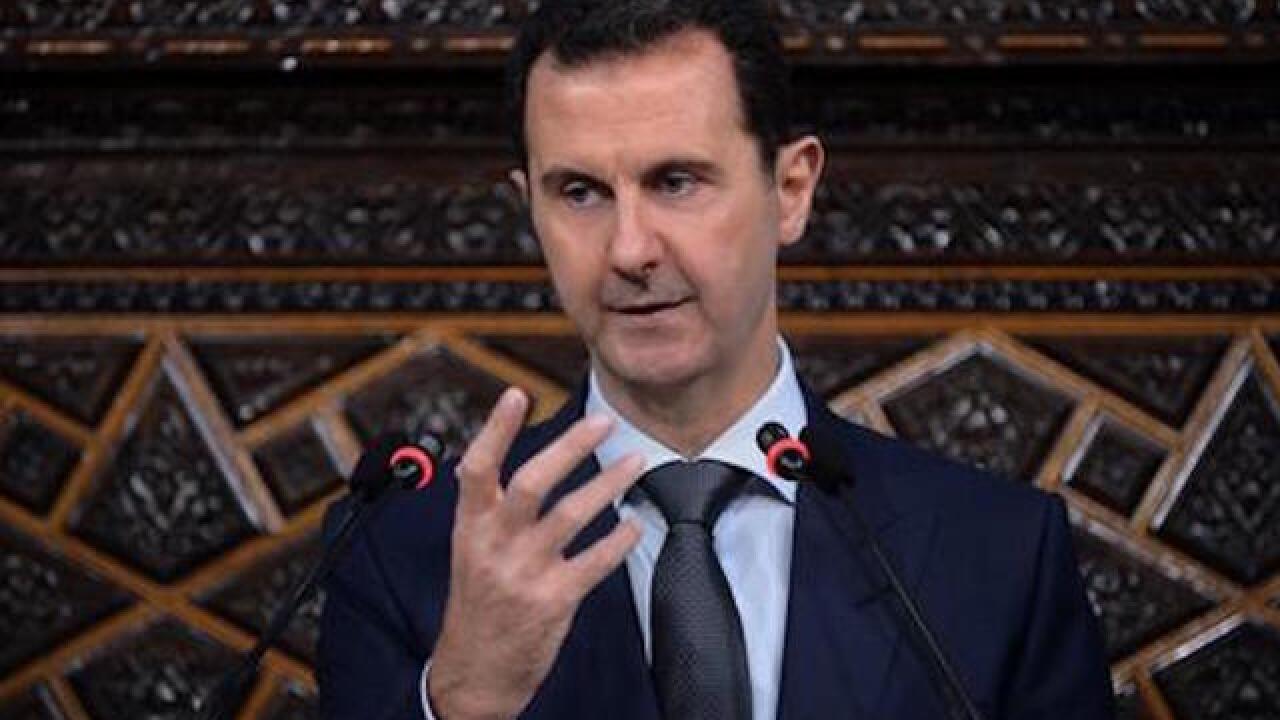 BEIRUT (AP) — The Syrian military declared a unilateral, three-day cease-fire for the entire country on Wednesday, coinciding with the start of the Muslim Eid al-Fitr holidays that marks the end of the holy month of Ramadan, state media reported.

The truce is to expire at midnight Friday, according to the state TV report.

U.S. Secretary of State John Kerry was quick to welcome the declaration, saying discussions were underway with Russia and other parties to expand it. Kerry appealed to all parties to honor it to allow for some respite in the country's ongoing bloodshed.

"We very much welcome the Syrian Army declaration of the 72-hour period of quiet in celebration of and in honor of Eid," Kerry said during a visit to Tbilisi, Georgia. "We are trying very hard to grow these current discussions in a longer-lasting, real, enforceable, cessation of hostilities."

"We hope that the 72 hours could perhaps be a harbinger of possibilities to come," he added.

But there were reports of sporadic violence Wednesday.

One rebel group said government forces and allied fighters moved in on a strategic town held by a powerful rebel group in Damascus suburbs. Seizing Madya, a town north of capital in the rebel-held eastern Ghouta could potentially sever one of their main supply routes.

Another U.S.-backed armed group, the New Syrian Army, which focuses on battling the Islamic State group in the country's east, said it is observing no truce.

"With Daesh, there is no such thing as cease-fire," said Mozahem al-Saloum, spokesman for the New Syrian Army, using the Arabic acronym from Islamic State. The group does not fight President Bashar Assad's troops.

Wednesday's announcement is the first time Syrian authorities have declared a blanket truce for the entire country. The last truce — a high-profile "cessation of hostilities" brokered by the United States and Russia — was declared on Feb. 27 and excluded militant groups such as the Islamic State and al-Qaida's branch in Syria, the Nusra Front.

For weeks, it sharply reduced violence in much of the country. However, the exclusion of areas under the militants' control opened the door for disagreements over who else was considered a terrorist group and would therefore be excluded from the cease-fire. The government of Bashar al-Assad considers all armed opposition to be terrorists.

The February cease-fire finally collapsed with a government offensive in the northern province of Aleppo, where a coalition of armed opposition groups has strongholds and also cooperates with the Nusra Front.

On the first day of Eid al-Fitr, Assad traveled to Syria's third largest city, Homs, for the holiday morning prayers.

State TV showed him praying in a Homs neighborhood that has been the scene of many car bombs over the years. Since nearly all of Homs' neighborhoods fell under government control earlier this year, the city has been mostly calm. Assad had recently traveled to the front line in eastern Damascus, another attempt to project confidence amid his troops' new territorial gains achieved with Russia's military and air support.

In the violence reported Wednesday, Jaish al-Islam, or the Army of Islam, a powerful armed rebel group that is in control of areas in Damascus suburbs, said clashes with pro-government forces have not let up.

Yasser al-Tayeb, a spokesman for the group, said pro-government forces were pressing on with their ground offensive on Mayda, in the eastern Ghouta suburbs of Damascus, which they launched on Tuesday. Hes aid they have also continued the bombardment of the besieged suburb of Douma.

On Tuesday, the state-run news agency SANA said Syrian forces were in control of large sections of the town, making it a "launching point" to expand operations in the area.

The government had blamed Jaish al-Islam for last Friday's killing of a Syrian air force pilot whose plane had crashed in the eastern Damascus suburbs, and vowed to punish the group. Jaish al-Islam blamed al-Qaida's branch for killing the pilot.

The Britain-based Syrian Observatory for Human Rights said pro-government militias, including the Lebanese Hezbollah group, have all but seized control of Mayda, an important supply route for the rebel-held suburbs.

In northern Aleppo, a province hotly contested between the government and an array of insurgent groups, activists reported reciprocal violence. Two children were killed when insurgent groups lobbed missiles into al-Zahraa, a predominantly Shiite town in the north. The Observatory said one person was killed and a media activist was wounded when warplanes struck in a rebel-controlled part of Aleppo city.

A rescue worker in the rebel-held part of Aleppo city, Bibars Meshal, said on Wednesday afternoon that barrel bombs struck Hraitan, an area north of the city.

In the central Hama province, activist Hassan al-Amari said in the afternoon that warplanes targeted the town of Hawash in the Sahal al-Ghab plains, north of Hama, where hard-line rebels, including the Nusra Front, seized territory from the government in April. The region's plains lie just east of Assad's coastal stronghold of Latakia. SANA said government forces clashed with IS fighters in northern Hama.