Russia: Syria withdrawal to be done in 3 days 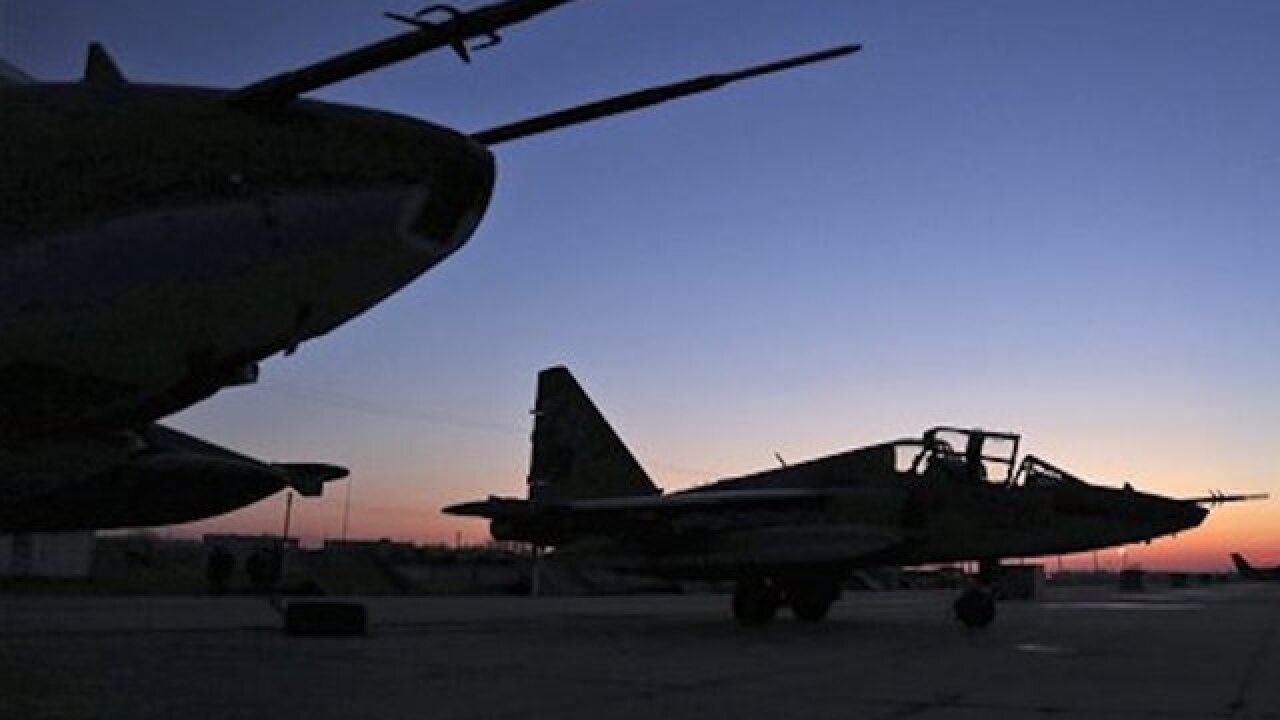 MOSCOW (AP) — President Vladimir Putin warned Thursday that Russia can again build up its forces in Syria "in a few hours" if necessary, and will continue striking extremist groups.

Putin, who ordered a partial withdrawal of Russian warplanes from Syria earlier this week, said that Russia has kept some forces in Syria to support the Syrian army's action against the Islamic State, the Nusra Front and other extremist groups. He also emphasized that the Russian military will be ready to use an array of air defense missile systems it has in Syria "against any targets that would threaten our servicemen."

Putin's statement underlined Russia's intention to maintain a strong military presence in Syria to keep its gains after a 5 ½-month air campaign that has helped turn the tide of war and allowed Syrian President Bashar Assad's forces to make significant advances.

Speaking during a Kremlin ceremony honoring Russian military officers who have taken part in the Syrian campaign, Putin said that the action in Syria has demonstrated Russia's "leadership, will and responsibility" in fighting "enemies of civilization."

He said the action in Syria cost the military about 33 billion rubles (about $480 million), adding that the Defense Ministry already had those funds earlier earmarked for maneuvers and used them instead to finance the Syrian campaign.

"There is no more efficient way of training than real combat," he said, adding that the military action in Syria allowed the Russian armed forces to test its long-range cruise missiles and other new weapons in real action for the first time.

Putin added that a Russian- and U.S.-brokered ceasefire that began on Feb. 27 has now allowed Russia to reduce its military presence in Syria. The number of Russian air missions flown in Syria has dropped from 60-80 to 20-30 a day, meaning that some warplanes could be sent home, he said without saying how many warplanes will stay in Syria.

Putin said that Assad had been informed in advance about the Russian pullout and supported the decision.

Putin praised the Syrian ruler for what he described as his readiness to contribute to a peaceful settlement. "We have seen his restraint, a sincere striving for peace and readiness for compromise and dialogue," he said.

The Russian president voiced hope that the partial withdrawal of Russian forces from Syria would send an "important positive signal" and help Syria peace talks that began in Geneva on Monday.

While praising cooperation with the U.S. in negotiating the truce, Putin warned that the Russian military remaining in Syria would be ready to act against any groups that would violate the cease-fire.

"If it becomes necessary, Russia is capable of building up its groups of forces in the region to the level required by the situation in literally a few hours and use our entire arsenal," he said. "We wouldn't like to do it ... and we count on common sense of all sides, on the Syrian authorities' and the opposition's adherence to the peace process."

Without naming any specific country, Putin said that "all interested nations have been warned" about Russia's intention to destroy any target that would threaten the Russian military. The warning appeared directed at Turkey, which downed a Russian warplane at the Syrian border in November.

"No one has the right to violate the airspace of a sovereign country, Syria," he said.

He also said the Syrian army will press its offensive on Palmyra and drive out the IS forces controlling it, adding that Russia will continue offering all kinds of assistance to Assad's military.

"It includes financial aid, the deliveries of weapons and military gear, help in training, organization and teaming of Syrian armed forces, intelligence support, help in planning combat missions," he said, adding that Russia would also continue to provide direct air cover for the Syrian military.