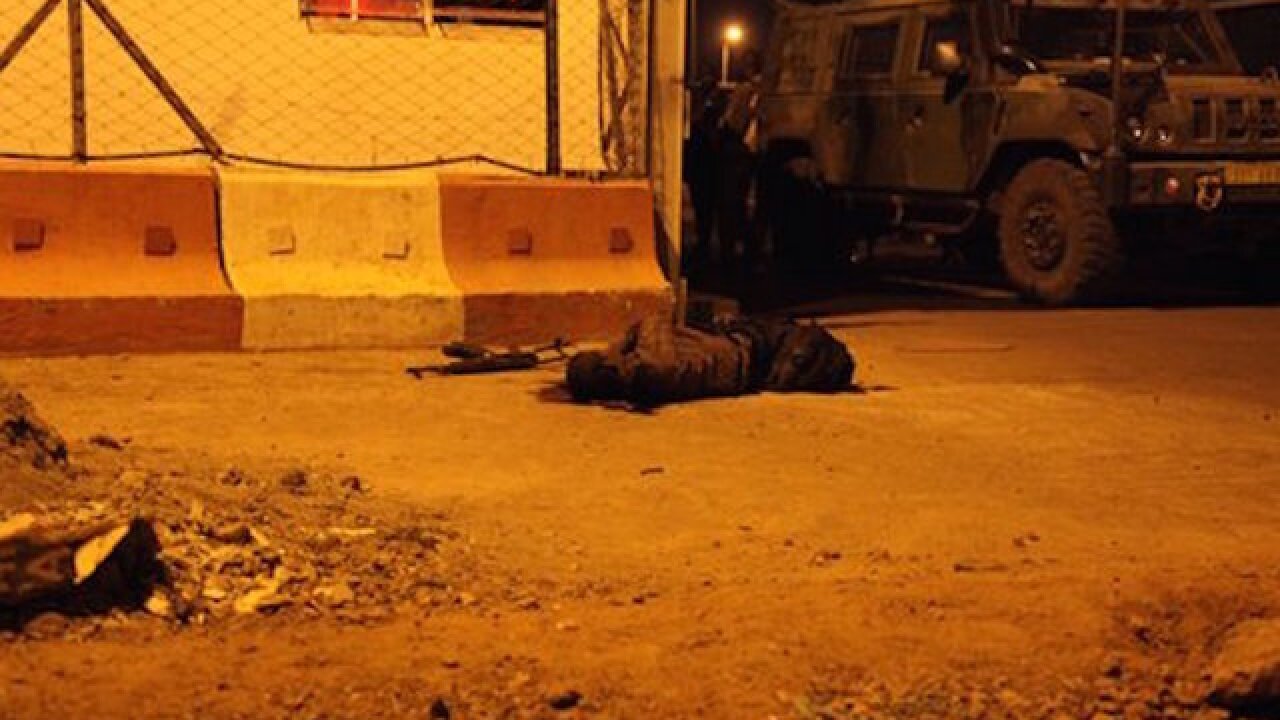 Baba Ahmed
<p>Soldiers stand next to the body of a suspected militant outside the European Union military missionís entrance in Bamako, Mali, Monday, March 21, 2016. Extremists launched an attack Monday evening on the European Union military missionís headquarters in the Malian capital, underscoring their determination to continue striking against Western interests in the region.(AP Photo/Baba Ahmed)</p>

BAMAKO, Mali (AP) — Gunmen launched an attack Monday evening on the European Union military training mission's headquarters in the Malian capital, Bamako, in what appeared to be the latest in a series of attacks on Western interests in the region.

Armed forces killed at least one man, who lay outside the hotel in jeans and a shirt in a pool of blood next to a Kalashnikov rifle. His backpack lay beside him. It was not immediately known how many people had launched the assault, and as of late Monday no group had claimed responsibility.

Sgt. Baba Dembele from the anti-terrorism unit in Bamako told an Associated Press reporter at the scene that it was believed some attackers had entered the Hotel Nord-Sud, where the mission is headquartered.

The EU training mission later released a statement saying it had come under attack by small arms fire but no personnel had been wounded, and that Malian security forces were securing the area.

EU soldiers, the Malian army, national police and other security forces stood outside the hotel.

The assault comes about four months after jihadis attacked the Radisson Blu hotel in Mali's capital, killing 20 people. Al-Qaida in the Islamic Maghreb and al-Mourabitoun claimed responsibility for that attack, saying it was their first joint attack since al-Mourabitoun joined al-Qaida's North Africa branch in 2015.

In January, extremists from the same militant groups attacked a cafe near a hotel popular with foreigners in Burkina Faso's capital, killing at least 30 people. And just last week, al-Qaida in the Islamic Maghreb claimed responsibility for an assault on a beach in Ivory Coast that left at least 19 dead, identifying the three attackers as members of al-Mourabitoun and Sahara units.

This week marks the fourth anniversary of the coup that unleashed widespread chaos in Mali. After the overthrow of the democratically elected president, extremists in the northern half of Mali took over major towns and began implementing their strict interpretation of Islamic law. The amputations and public whippings only ended when a French-led military mission forced them from power in 2013.

Over the past year, the jihadis have mounted a growing wave of violent attacks against U.N. peacekeepers who are trying to help stabilize the country.

The EU launched a training mission to help support and rebuild the Malian armed forces in February 2013 at the request of Malian authorities. The training is carried out in Koulikoro, about 60 kilometers (37 miles) northeast of the capital.

This story has been corrected to give the death toll in the Burkina Faso attack as 30, not 29.