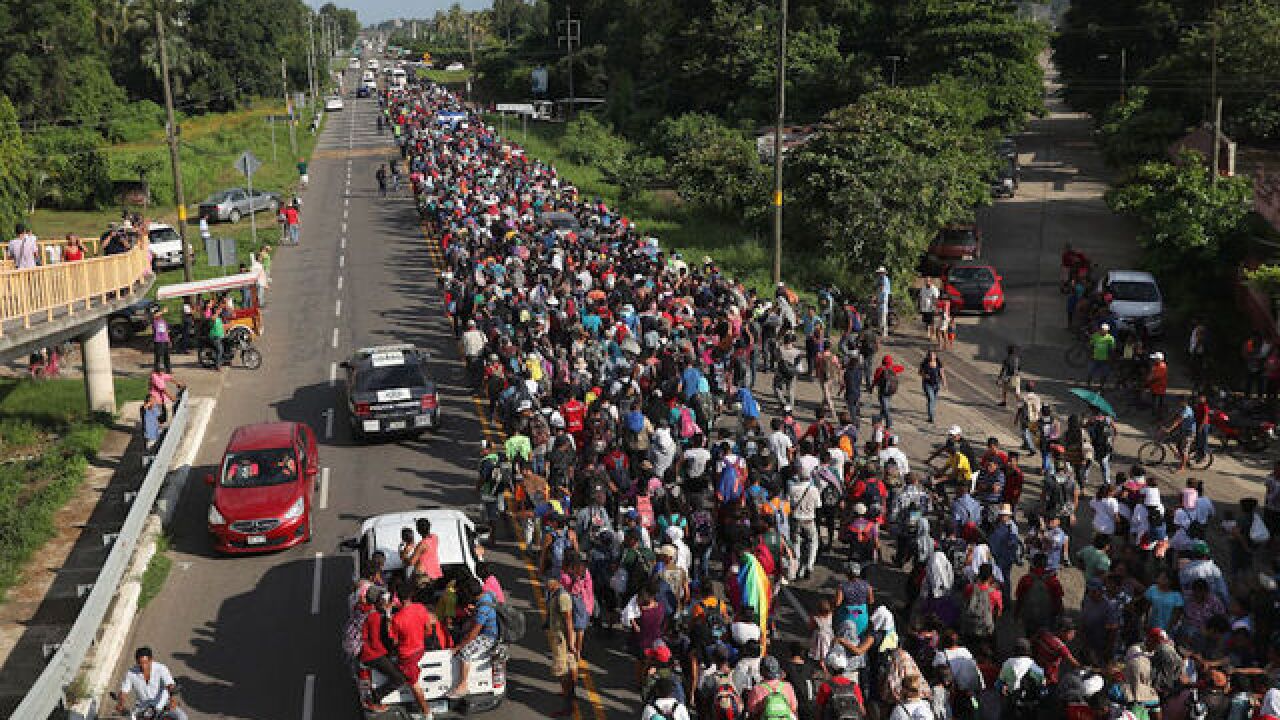 Image copyright 2018 Getty Images. All rights reserved. This material may not be published, broadcast, rewritten, or redistributed.
John Moore
<p>A migrant caravan walks into the interior of Mexico from the Guatemalan border on October 21, 2018 near Ciudad Hidalgo, Mexico The caravan of thousands of Central Americans plans to eventually reach the United States. U.S. President Donald Trump has threatened to cancel the recent trade deal with Mexico and withhold aid to Central American countries if the caravan isn't stopped before reaching the U.S.</p>

Trudging forward in the sweltering sun, thousands of migrants left the Mexican city of Tapachula on Monday and continued their trek toward the U.S. border.

There seemed to be little organization as the migrants streamed north -- and plenty of peril.

Cars whizzed by long lines of people walking on a highway. One man fell hard from the back of a flatbed. A group of migrants said they had witnessed a child run over by a truck.

Scenes from the 2,000-mile journey thousands are making to get to the U.S. border

Mexican and Honduran authorities confirmed Monday that a 25-year-old Honduran national participating in the caravan had died.

"I deeply lament the death of a 25-year-old Honduran man, who was participating in the migrant caravan. He lost his life when he fell off a trailer that was moving," Mexico's Interior Secretary Alfonso Navarrete Prida tweeted. Another Honduran national was confirmed dead Saturday, when he fell off a pick-up truck.

On Monday, the majority of migrants made their way on foot. But some also flagged down cars and trucks passing by and piled onto any vehicle that would take them.

The highway behind the passing migrants was littered with plastic bottles, juice boxes and Styrofoam plates, resembling the scene of a marathon that has just ended.

But for this group -- which U.N. officials estimate numbers more than 7,000 -- the marathon is far from over.

If they continue on foot, it will likely take them more than a week to make it to Mexico's northern border.

A key unanswered question: Will Mexican authorities stop the massive caravan before its members reach the United States?

Mexican President Enrique Peña Nieto said Monday it will be difficult for the migrant caravan to reach its goals if they don't respect Mexican immigration laws.

"To all those who have chosen to continue with this caravan, which operates outside of the legal order, I respectfully say and want to make clear, if you continue with this behavior it will be difficult for you to reach your goal, be it entering the United States or staying in Mexico," Peña Nieto said during a speech in Mexico City. "Any other means that don't involve respecting the law will make it very difficult for those marching with this caravan to reach their objective."

The caravan formed in San Pedro Sula, Honduras, more than a week ago and made its way through Guatemala before arriving at the Mexican border on Friday, when police at one point fired tear gas at an unruly crowd.

Before the caravan's arrival, Mexican authorities said that anyone who entered their country "in an irregular manner" could be subject to apprehension and deportation, but many migrants from the caravan appear to have circumvented authorities so far.

CNN teams witnessed migrants jumping off a bridge at the Mexico-Guatemala border over the weekend and riding rafts across a river to reach Mexican soil.

For days, Mexican police have made a point of showing stepped up security, standing guard in riot gear as the group marches on. But they haven't detained the majority of the migrants from the caravan.

Still, suspicions are running high among the migrants -- mostly Hondurans who say they're fleeing poverty and violence. Mexican officials have been sending buses and offering to transport them, but migrants have been hesitant to board -- worried they'll end up trapped in government custody, unable to continue their journeys to the U.S. border.

On Monday the migrants had a more modest goal for their destination: Huixtla, a town about 21 miles away.

That's roughly the same distance the migrants had traveled the day before.

Rosa Dubon, 34, said she fled Honduras with her 2-year-old and 4-year-old after MS-13 gang members started to make people pay monthly fees. Her older sons, she said, already fled after gangs back home had tried to recruit them.

"There is no going back," she said, standing under a bridge on a highway outside of Tapachula.

Further north, people lay down clothes on the side of the highway and offered them to those walking by, along with bags of water and diapers. One woman gave away tamales.

Many in the migrant caravan were limping at the end of that leg of their trek -- their shoes falling apart as they arrived in Tapachula. At night, they packed so tightly into the city's central plaza that there was almost no room to walk. Hundreds of people slept on the ground.

U.S. President Donald Trump warned once again that he'd declare a "national emergency" over the approaching caravan and others like it, vowed to slash foreign aid to several Central American countries and said that criminals -- and specifically people from the Middle East -- had infiltrated the group.

Even as analysts and a senior counterterrorism official countered that claim, Trump doubled down, telling reporters at the White House to "go into the middle" of the caravan and "search."

CNN reporters following the caravan say they haven't met anyone from the Middle East, and have encountered many people who are fleeing gang violence.

Mexican authorities say more than 1,000 migrants from the caravan have officially applied for refugee status in Mexico.

Miguel Hernandez watched members of the caravan march by in the southern Mexican state of Chiapas, waving and offering words of encouragement.

"I've never seen anything like this in my life, in 60 years, until today," he said. "It must be that where they live they don't take care of them the way they should."

Mexicans lined up along roads to hand out supplies to passersby, many expressing a sense of solidarity with the migrants' plight. They distributed hot food and cold drinks, and gave children bags full of candy.

Adela Ochoa Martinez passed out cups of water, noting that she was eager to help the passing migrants.

"They are people who need it. Today it's for them," she said. "Tomorrow it's for us."

It's painful, Ochoa said, to see so many children in the crowd.

"It hurts a lot," she said, fighting back tears, "and it touches my heart."