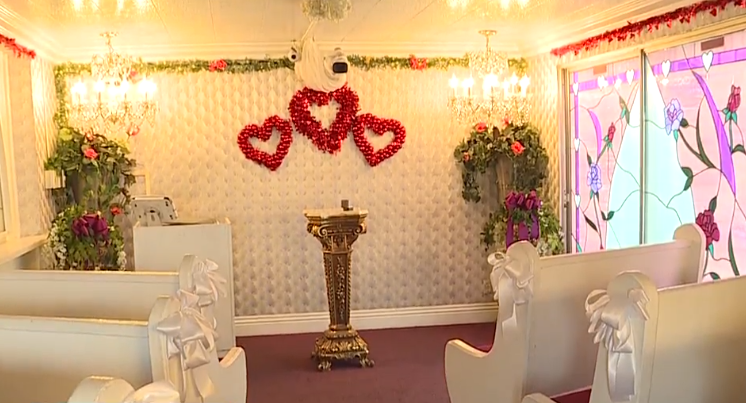 Although Vegas weddings have been on the decline over the last decade, chapels are preparing for one of their busiest days of the year.

LAS VEGAS/KTNV — On days like Valentine's Day, it's hard to believe the Vegas wedding industry is on the decline.

"I now pronounce you husband and wife - next," joked Charolette Richards, longtime owner of the Little White Wedding Chapel.

Richards, who's been at the helm of the famous chapel on Las Vegas Blvd. for more than 60 years, said they have more than a hundred ceremonies booked tomorrow - and that doesn't include walk-ins.

Although tomorrow will be a big day for the chapel, Richards said she has seen her fair share of ups and downs in the business.

"We've been through our valleys when you're wondering what's happening and what's not but I think right now, we're on a mountaintop," said Richards. "I really do."

The Vegas wedding industry is continually changing, but according to the LVCVA and the Clark County Clerk's office, the number of marriage certificates issued has been on a fairly steady decline over the last decade.

Nationally, statistics show more people are either remaining unmarried or choosing to marry later in life.

But according to Jeremy Aguero of Applied Analysis, other national wedding trends could actually help Vegas' industry.

"Fewer of them are black tie then they used to be," Aguero said. "The fact that about half as many are in a church that used to be. I want to believe that some of those trends really do benefit what Las Vegas can offer because we've got a little something for everyone."

A decade ago tomorrow, Melissa and Trey Tomsik started Scenic Las Vegas Weddings, hoping to offer an alternative to the traditional Vegas chapel wedding. The focus? Taking ceremonies outside where the true beauty of Las Vegas and the surrounding areas could be on full display.

"He inserts a wedding couple into beautiful scenery at Valley of Fire or El Dorado Canyon Ghost Town or Red Rock Canyon and gives them something really special in terms of photography," said Melissa.

Aguero believes Vegas will continue to be a destination for the weddings because it continues to evolve.

"I think we need to embrace what people come to Las Vegas for," he said. "You want to get married in front of the Las Vegas sign? Terrific. You want to get married by Elvis? We can do that. You want to do something that's big and beautiful and glamorous? We can do that too. Because at the end of the day, Las Vegas isn't about what matters to us, it's what matters to those 42 million visitors, and I think that's really what's important."