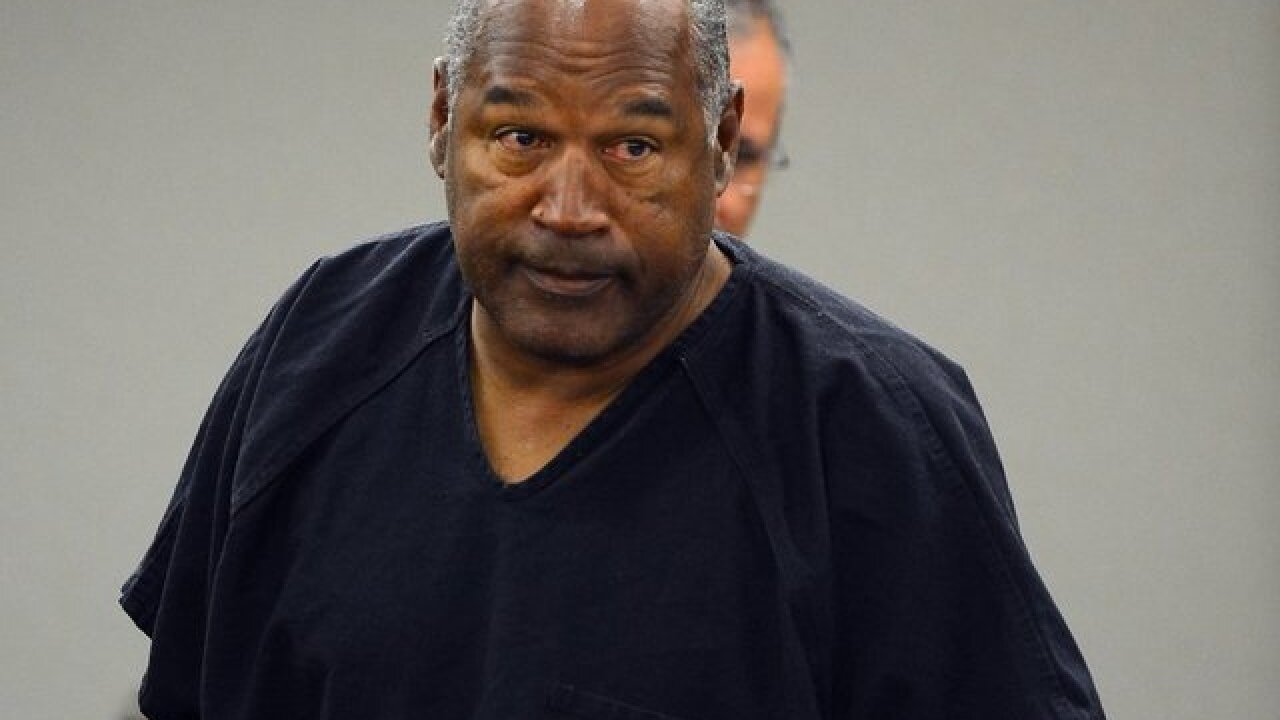 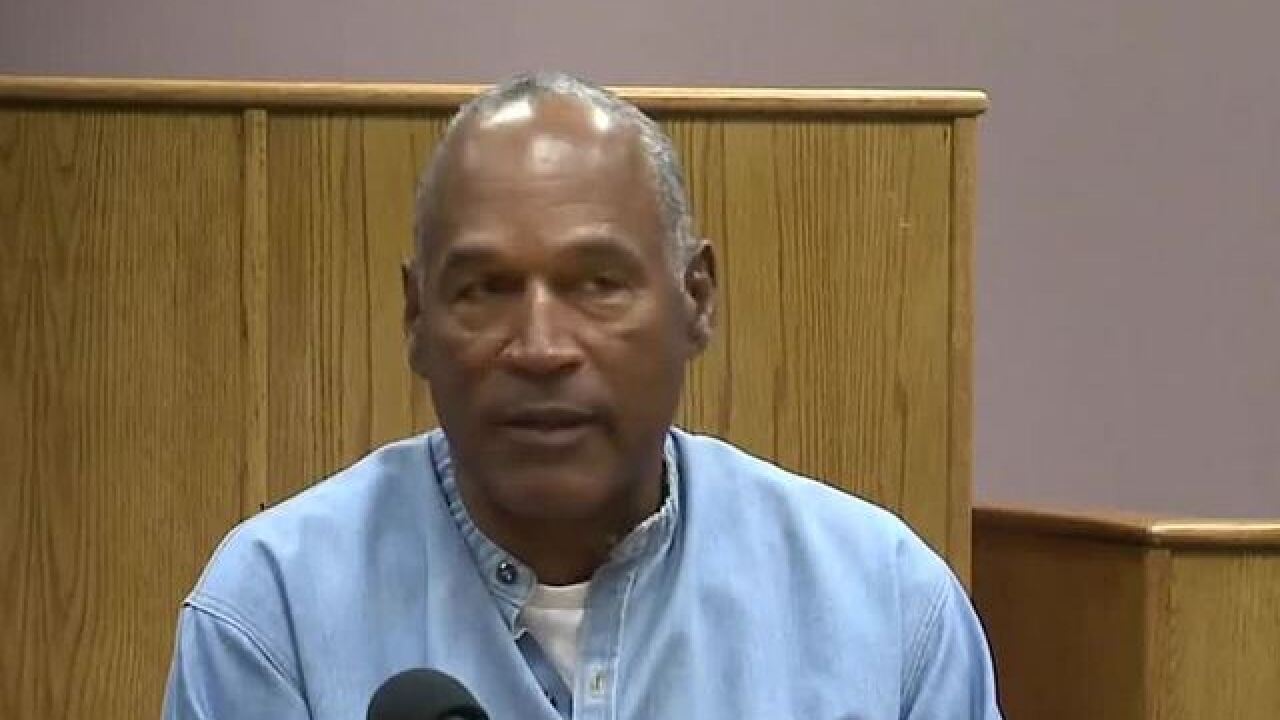 Two of Simpson’s children already live in the state. Simpson’s friend, Tom Scotto, has offered to let Simpson stay live with him in Naples, Fl.

Simpson, who has served nine years for armed robbery,  was approved for parole last July.
Simpson, is eligible for release on Sunday, Oct. 1. LaVergne has told 13 Action News, that date is unlikely since normally there would not be enough prison staffers to transport Simpson on a weekend. This case, however, is anything but normal.

The Florida Attorney General has said she does not want Simpson there.

UPDATE SEPT. 29 3 P.M.: Florida's Attorney General has released a statement opposing O.J. Simpson's plans to come to Florida after his release from a Nevada prison.

We are well aware of OJ's scofflaw attitude & our state should not become a country club for this convicted criminal https://t.co/iRSeKlj14F pic.twitter.com/47IhL5CeBx

In a tweet, Attorney General Pam Bondi said, "We are well aware of OJ's scofflaw attitude & our state should not become a country club for this convicted criminal." She then attached a letter to the Florida Department of Corrections secretary.

The letter requests that the Florida Department of Corrections immediately notify all appropriate authorities of Nevada that Florida objects to granting Simpson permission to relocate to Florida to serve parole.

"There is no justification under these circumstances for asking the taxpayers of Florida to foot the bill for hosting Mr. Simpson's parole, especially in light of the added dangers that his relocation would pose to our citizens," according to the letter.

Among the reasons Bondi writes that Florida should object to Simpson coming to Florida include the civil judgment against him in the deaths of Nicole Brown Simpson and Ron Goldman, O.J. Simpson not paying for the judgments of liability related to those deaths, his criminal activity that led to his Las Vegas arrest, and "the added burden that his notoriety would impose on law enforcement personnel in Florida." There is also the concern that Simpson would pose a risk to the citizens of Florida.

Bondi also mentions accusations in Florida when he apparently broken into a then-girlfriend's home and road rage battery against a motorist. Simpson was also arrested for allegedly speeding in a powerboat while in a manatee zone.

But the Florida attorney general does say if the state's Department of Corrections finds that Simpson does meet the requirements to move to Florida after he is released, the state is "entitled to take all deliberate steps to ensure that Mr. Simpson is subjected to the most stringent and secure conditions of supervision." Among these conditions include that Simpson must report to the parole officer in person and not by mail, he must wear an electronic monitoring braclet, his travel must be substantially restricted and Simpson cannot cnonsume alcohol or drugs and be tested on a regular basis.

UPDATE SEPT. 28, 11 P.M.: "The Juice" could be free as early as next week. The details, however, of when O.J. Simpson will be released from prison and where he'll go to live are almost as closely guarded as state secrets. One thing that's no secret, the former football star will be glad to get out.

Simpson's lawyer, Malcolm LaVergne, told 13 Action News that Nevada Corrections placed his client in a more secluded part of Lovelock Correctional Center since a panel granted him parole back in July.

"He's a people person, likes to talk and he's only got the one guard to talk to. So he's going a little bit stir crazy," Scotto said.

Simpson has spent the last nine years behind bars for armed robbery.

Scotto has invited Simpson to live with him in Naples, FL. "The first pictures will be of us going out to dinner," Scotto said.

Jeffrey Felix, a former corrections officer who guarded Simpson, thinks the juice could settle in Las Vegas. "People I know within the prison got back to me that that is his plan he told them he wants to go to a retirement community and lay low."

No matter where Simpson lands, the man Scotto calls a people person, will not go into seclusion. "He's gonna do the same thing he always did. He's gonna spend time with his family, if he wants to go out to dinner, go out to dinner. So he’ll be around. People will see him. He’s gonna live his life. "

UPDATE SEPT. 28 7 P.M.: A corrections officer, who claims to have spent years at O.J. Simpson's side, says he believes Simpson will move to Las Vegas after he gets out of prison.

Originally, we contacted Felix to get information on Simpson's safety at High Desert State Prison, where the Nevada Department of Corrections says he'll be escorted before being released.

Felix also gave insight on how quickly Simpson could be released.

"I would say no later than Wednesday," Felix said. "NDOC doesn't not want him longer than they need him."

The surprise in the conversation came when Felix said he's been getting word Simpson will not move to Florida, but instead stay nestled in Sin City.

"People I know within the prison got back to me that, that is his plan. He told them he wants to go to a retirement community and lay low," Felix said.

The Florida Department of Corrections says it has not received any documentation for a Simpson release, which they'll need if he chooses to go there.

13 Action News also reached out to the Parole and Probation office in Las Vegas, but they say they can't tell us if Simpson has filed paperwork with them.

Simpson and Felix do have rocky past.

Felix retired from Lovelock State Prison after 20 years and wrote a book about Simpson and his relationship titled "Guarding the Juice."

During Simpson's parole, both Simpson and his attorney Malcolm LaVergne called out Felix for false accounts in his book.

But Felix says once Simpson is free, he would like to make amends.

"He was commissioner of a softball league. He had freedom among all the inmates," LaVergne said.

But in the weeks after his parole hearing Simpson's mood grew gloomy.

"He was just bored to tears," said LaVergne, who told 13 Action News Nevada corrections moved Simpson into a more secluded section of the prison. "They decided to put him in a more secure area for his own protection just to be on the safe side."

“It was a little bit of a bummer for him for the first few weeks, maybe even a month, but ultimately, his spirits have picked up and he's getting more and more excited," LaVergne said.

Last July, a panel approved Simpson’s parole for October. Simpson served nine years in Lovelock on an armed robbery conviction after his 1995 acquittal in the murders of his ex-wife Nicole Brown Simpson and her friend Ron Goldman.

Simpson, technically, could be released as early as Oct. 1. The question is: will he?

Since Oct. 1 falls on Sunday, there wouldn’t be any staff around to transport Simpson, who eventually, would move from Lovelock Correctional Center to High Desert State Prison, just outside Las Vegas.

LaVergne said it isn't clear if Simpson has made proper arrangements yet. That could delay his release.

Malcolm LaVergne says that he does not know when his client will be released.

He told Darcy Spears during the First on 13 Action News interview that it could be a few days, a few weeks or even longer. LaVergne said he anticipates Simpson's parole will go smoothly.

Simpson was granted parole during a hearing in July.

READ ALL STORIES RELATED TO O.J. SIMPSON ON KTNV.COM

He has served 9 years at Lovelock Correctional Center in northern Nevada for armed robbery. Simpson was convicted after he attempted to take back items that he believed were his during a violent confrontation at the Palace Station hotel-casino in Las Vegas.

LaVergne said that Simpson is very excited about his upcoming parole but that he grew bored at Lovelock Correctional Center after being put into isolation. He was put into isolation for his safety after parole was granted.

The Associated Press reported on Wednesday that the Nevada Department of Corrections said that Simpson would be moved to High Desert State Prison outside of Las Vegas near Indian Springs before his release.

13 Action News also spoke to LaVergne about a new bill that is being proposed that would require the Nevada parole board to take into account the inmate's history of domestic violence. LaVergne took issue with the fact that while Simpson pleaded no contest to spousal abuse in 1989, the conviction was expunged and would not be considered in a parole hearing.